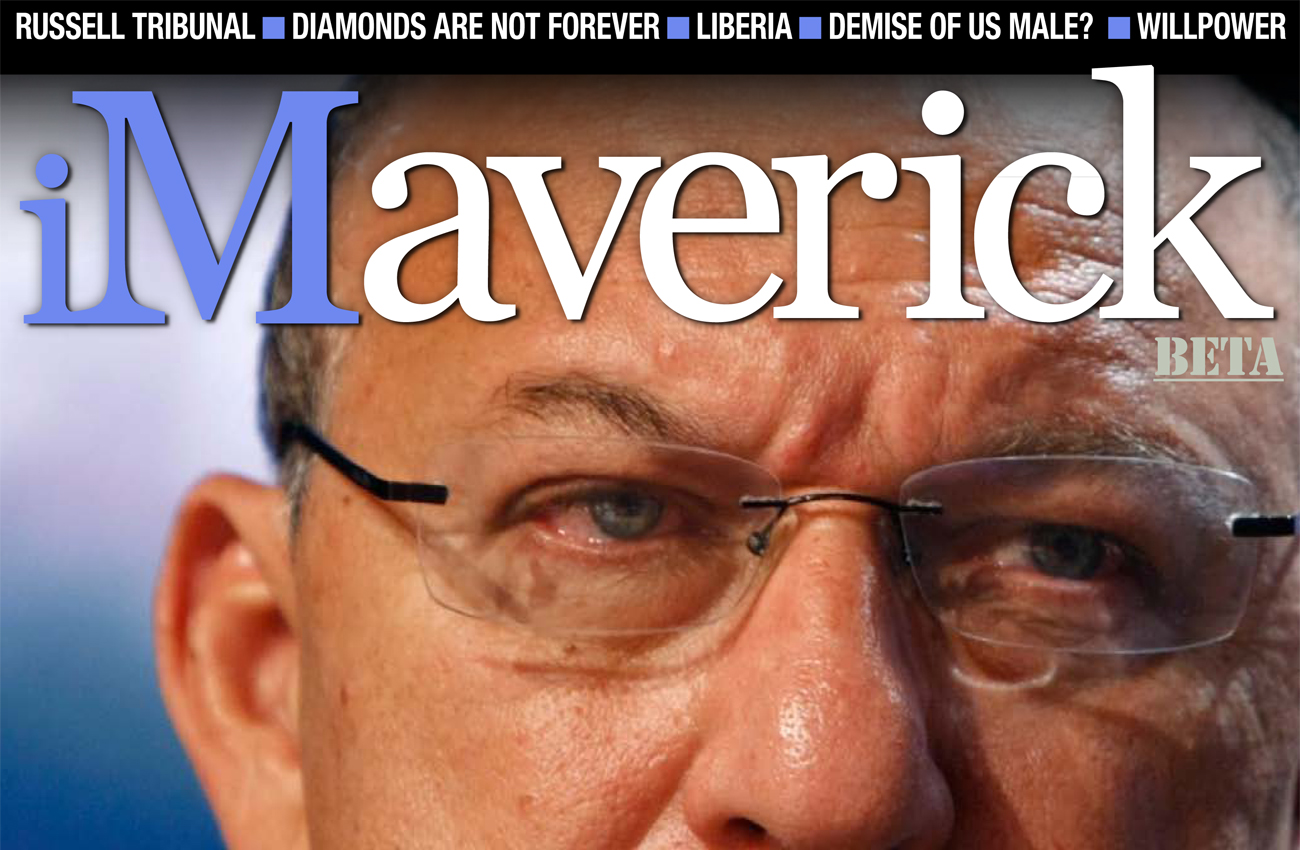 Trevor's National Planning Commission goes YouTube; Russell Tribunal on Palestine in Cape Town; Diamonds are not forever: just ask the Oppenheimers; Tubman threatens Liberia's democracy; the demise of the US male?; and willpower and the secret to self-control. By iMAVERICK TEAM.

It has been said often enough – what happens to the ANC has a bearing on all of us. We should be watching the ruling party’s slip from a position of progressive non-racialism to black racial nationalism with disquiet. But what needs to happen for the slide to be checked? Let’s pretend for three minutes that we are the secretary general of the ANC, tasked with keeping the party on the straight and narrow.

The Department of Defence has put out a R1.6 billion tender for supplying two business jets for the use of President Jacob Zuma and Deputy President Kgalema Motlanthe. The DA, needless to say, is not happy about this. By THERESA MALLINSON.

As the Democratic Republic of Congo’s 28 November election date draws closer, intimidation of journalists is escalating. NGOs Reporters Without Borders and Journaliste en Danger are sufficiently concerned about the situation to write an open letter to officials, asking them to secure the safety of journalists during the election. By THERESA MALLINSON.

Friday in north-eastern Nigeria was a day of violence and bloodshed, with suicide attacks, roadside bombings and running gun battles raging in at least three cities. So much for Nigerian army claims that they’re on top of Boko Haram and the security situation. By SIMON ALLISON.

Kenya has taken to the Twitter to publicise its invasion of Somalia, judging that 140 characters is exactly enough to warn innocent Somalis of their impending doom. By SIMON ALLISON.

News Corporation announced on Friday its voluntarily compensation scheme for people whose phones were hacked. But with civil claims mounting, not to mention James Murdoch’s date to reappear before parliament on Thursday to answer further questions about the phone-hacking saga, it looks like it might be too little, too late. By THERESA MALLINSON.

Champion Casey Stoner mounted a thrilling late charge to pip Ben Spies to the line and snatch a 10th victory of the season at the final motorcycling Grand Prix of the year in rainy Valencia on Sunday. By Iain Rodgers (Reuters).

Roger Federer won the Swiss Indoors title for the fifth time in six years when he demolished unseeded Kei Nishikori in the final of his hometown tournament on Sunday. By Brian Homewood (Reuters).

Juan Martin Del Potro’s chances of securing a berth at this month’s World Tour finals dwindled when the Argentine was upset 6-4 7-6 by unseeded Spaniard Marcel Granollers in the semi-finals of the Valencia Open on Saturday. By Ian Rodgers (Reuters).

Ana Ivanovic celebrated her 24th birthday by successfully defending her Tournament of Champions title with a comfortable 6-3 6-0 victory over Spain’s Anabel Medina Garrigues on Sunday. By Barry Wood (Reuters).

MALEMA MAY STILL FACE COURT OVER THE ‘MAKULA’ SLUR

Charges of hate speech against Indians have been lodged against Julius Malema in Pietermaritzburg by members of the South African Minority Rights Equality Group. The group says it may drop charges if Malema meets with them to talk about the issue. By SIPHO HLONGWANE.

South Africa faces nine key challenges – that’s the word from the National Planning Commission. But to get the critical buy-in from everyone concerned, it first needs to inform and explain; the NPC has turned to YouTube for help. By SIPHO HLONGWANE.

The third session of the Russell Tribunal on Palestine, which sought to answer whether Israel’s practices against the Palestinian people in breach of the prohibition on apartheid under International Law, convened in Cape Town over the weekend. Perhaps not surprisingly, critics, among them the South African Jewish Board of Deputies and South African Zionist Federation, have described the tribunal as a “kangaroo court” and a “pointless smear campaign pushing a narrow agenda against Israel, and using high-profile participants to attract media attention”. By OSIAME MOLEFE.

It’s crunch time for Liberia’s nascent democracy. Main opposition candidate Winston Tubman pulled out of the run-off elections, citing all sorts of problems, although the real problem is his lack of support. Can Liberia make it through this political crisis? By SIMON ALLISON.

With Silvio Berlusconi’s fate resting on a group of party rebels threatening to pull the rug from under his government next week, the Italian prime minister is using carrot and stick to try to win over the doubters and pull off yet another parliamentary escape. By Gavin Jones (Reuters).

Allegations that Republican presidential candidate Herman Cain sexually harassed women in the 1990s have begun to damage his bid for the White House, a Reuters/Ipsos poll found. By Steve Holland (Reuters).

Hey, someone had to write that headline. The De Beers Diamond Group will be bought by Anglo American for $5.1 billion. The Oppenheimer family is cashing out. Diamonds may be forever, but selling them, it seems, has a best- buy date. Not exactly a serious look by RICHARD POPLAK.

That nostalgic, curmudgeonly man with grey bushy eyebrows and a bulldog face that delighted the American public with insights into everyday life is with us no more. The cantankerous 60 Minutes columnist that audiences loved has gone to that big newsroom in the sky. By MANDY DE WAAL.

ANALYSIS: YET MORE PROOF OF THE DEMISE OF THE AMERICAN MALE

New data out of the US Census Bureau shows that the percentage of men between the ages of 25 and 34 who still live with their parents has increased by almost a third over the last five years. Women, meanwhile, are becoming ever more employable in the recessionary environment. What does this mean for American macho? By KEVIN BLOOM.

WILLPOWER AND THE SECRET TO SELF-CONTROL

If you’ve been making bad decisions or finding it impossible to resist temptation, perhaps you’re suffering from decision fatigue? If so, you’ll be pleased to know that willpower is like a muscle that can be strengthened, is fuelled by glucose but that it can be fatigued by overuse. MANDY DE WAAL investigates.

PAKISTAN VERDICT – THE LONG AND SHORT OF IT

Do the crime do the time believes Julia Harris, who welcomes a hefty deterrent for any other would-be cricket criminals. By Cricket365.com.

Martin Kaymer capitalised on a flurry of birdies to shoot a brilliant final round 63 to win the WGC-HSBC Champions event by three strokes with a 20 under par total of 268 on Sunday. By Reuters sportdesk.