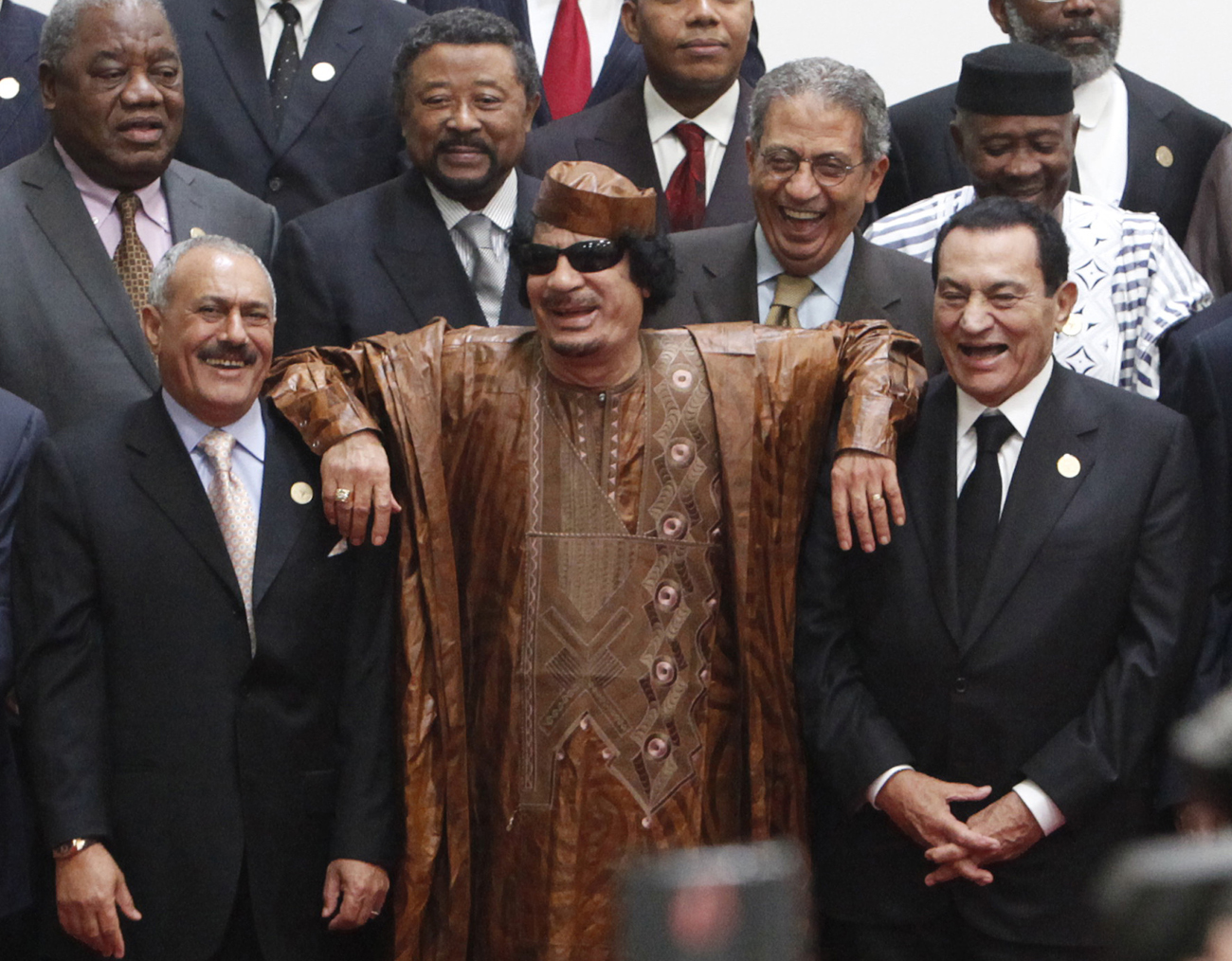 The murmurs of South African involvement in the botched escape of fallen despot Muammar “Mad Dog” Gaddafi are becoming too loud to ignore. SIMON ALLISON sifts through the reports and rumours surrounding local guns-for-hire and their doomed Libyan adventure.

Let’s start with what we know for sure – because after that it all gets a bit murky. On 20 October a convoy containing deposed Libyan leader Muammar Gaddafi sped out of his hometown of Sirte. The convoy was targeted by Nato warplanes. It halted. Gaddafi left his vehicle, and sought cover in a storm drain, where he was captured by forces aligned with Libya’s National Transitional Council and subsequently killed. He may or may not have been tortured and executed, but that’s a mystery for another time.

What we’re interested in is that convoy. Where was it going, who was in it and how did they come to be there? And the reason we’re interested is because reports keep quietly, persistently emerging that rather than being surrounded by loyal Libyans, Gaddafi’s last hours and days were spent in the company of a team of South African mercenaries.

The reports are confused and contradictory. Apparently, a small force of South African mercenaries was recruited in the last days of the Libyan revolution with one goal in mind: to get Gaddafi out of Libya, probably into neighbouring Niger and thence to a “tent in the Karoo”, as City Press memorably puts it. Recruits were offered $15,000 (R120,000), which seems a ludicrously low fee for such an uncertain and dangerous mission.

The recruiting was done, according to City Press, by a certain Sarah Penfold, a British “executive protection and security specialist” based in Nairobi. The New Age reports the same, adding more detail: that interviews were held on 17 August at the Balalaika Hotel in Sandton and two teams of mercenaries were recruited. The first team would escort Gaddafi’s wife and other family members to Algeria and the second would help Gaddafi escape.

Penfold denies this claim. She says she was involved in recruiting a private security force for work in Libya, but that their work had nothing to do with Gaddafi. Instead, it was undertaken on behalf of an oil company wanting to protect its assets in Libya.

Penfold pointed the finger at South Africa, suggesting that there was another security group running parallel operations in Libya, this one with shadowy links to the South African government. “Then I find out from some intel friends that your [South Africa’s] lovely head of police with his ANC links got a load of police guys together,” Penfold said, according to the Independent. Penfold doesn’t provide a name, but the head of police at the time was the now-suspended Bheki Cele. Cele could not be reached for comment. Now that he’s on suspension, it seems no government department is willing to take responsibility for him, and personal numbers that we obtained for him were not answered.

While Cele’s involvement can’t be confirmed or denied, an intelligence source quoted by The New Age says the 19 mercenaries involved in the failed Gaddafi extraction were all former police officers. The source added that they might have been under the impression that the operation was sanctioned by the United Nations.

There’s also a suggestion that the operation was conducted under the auspices of Nato. Danie Odendaal claims to have been one of the South African mercenaries with Gaddafi when the convoy was attacked. He says three groups of South Africans were flown into Libya to help the Gaddafi family escape – presumably one group for Gaddafi’s wife, one for Gaddafi himself and another for his son Saif, who is still at large. The mercenaries thought they had struck a deal with Nato, who wanted to get Gaddafi out of Libya. “We all believed they [certain Western countries] wanted him out of Libya. But then Nato attacked. It was a gruesome, gruesome orgy, I think we were sold out.”

Odendaal claims the fighters were flown into Libya via Dubai. This would only have been possible if Nato was complicit, as a no-fly zone was being strictly enforced over Libyan skies at the time. But The New Age reports that the mercenaries took a different route, flying into neighbouring Tunisia where they were issued with firearms before making the trip by road into Libya.

It’s unclear when the mercenaries accompanying Gaddafi’s convoy on 20 October arrived in Sirte, the Gaddafi stronghold where the dictator had spent his last weeks. Did they participate in the fighting with NTC forces, or did they merely collect Gaddafi and immediately try to make their way out of the country?

And it’s also impossible to be sure at this points whether the mercenaries were in fact South African. The department for international relations and cooperation hasn’t been able to confirm their nationality. Spokesman Clayson Monyela told Daily Maverick: “There is no independent way of verifying if they are South African or not because anybody involved would not be using genuine travel documents, precisely because such activities are illegal. Independently verifying such things is near impossible.”

Monyela vociferously denied official South African government involvement. “We are not linked to any such activities, illegal activities. If they are caught, the law must take its course.”

And they were caught; at least the mercenary group accompanying Gaddafi was. It was a mission that was doomed to fail – either because Nato set them up, as Odendaal claims, or simply because the odds were never in favour of 19 or so men against a revolutionary army backed up with some of the most sophisticated air power and surveillance the world has to offer. When Gaddafi was captured, the mercenaries were rounded up too, and their fate in the chaos of the new Libya is uncertain.

Some, apparently, have been released. Odendaal said he was sent to Cairo for treatment. Others are apparently still in Libya, and Odendaal claims that two South Africans were killed in the fighting. Revolutionary fighters report seeing white bodies around Gaddafi’s escape convoy that later disappeared. “There were, I think, three or four bodies of foreigners. We were told not to touch them, they would not be going back to Misrata…Later I heard they were from Zimbabwe and South Africa,” said Abdullah Hakim Husseini, from the Misrata brigade.

One person particularly concerned about the mercenaries’ fate is notorious mercenary leader Simon Mann, who planned the failed coup in Equatorial Guinea in 2005, the one that involved South African mercenaries and Margaret Thatcher’s son. Mann claims that some of the mercenaries involved in Equatorial Guinea were also involved in Libya. “We are concerned about what may have happened to those who had been injured, who may have been arrested,” Mann commented. “I would personally like to help in any way I can, legally, to help get them out…These are people I knew and obviously I don’t want to see them suffer. I hasten to add, of course, that I was not involved in any way in this Libyan operation.”

Mann recently claimed the Equatorial Guinea plot had received the tacit backing of the South African government, which has always denied any involvement.

Of the three South African mercenary groups that have been reported to be in Libya, only one could have been successful – Gaddafi’s wife and a couple of his sons and other family members made it safely to Algeria. Gaddafi’s son Saif al-Islam is thought to be somewhere in the Libyan desert. He’s in negotiations with the International Criminal Court about handing himself over, and even the ICC thinks he’s being protected by South African mercenaries. And as for the third group, the one tasked with getting Gaddafi out, we might never know the full truth surrounding what exactly happened in the Libyan desert outside Sirte on 20 October. But it seems safe to say that where there’s smoke, there’s fire and where there’s an African conflict, there’s always a South African mercenary or two, generally doing something dangerous and stupid. DM