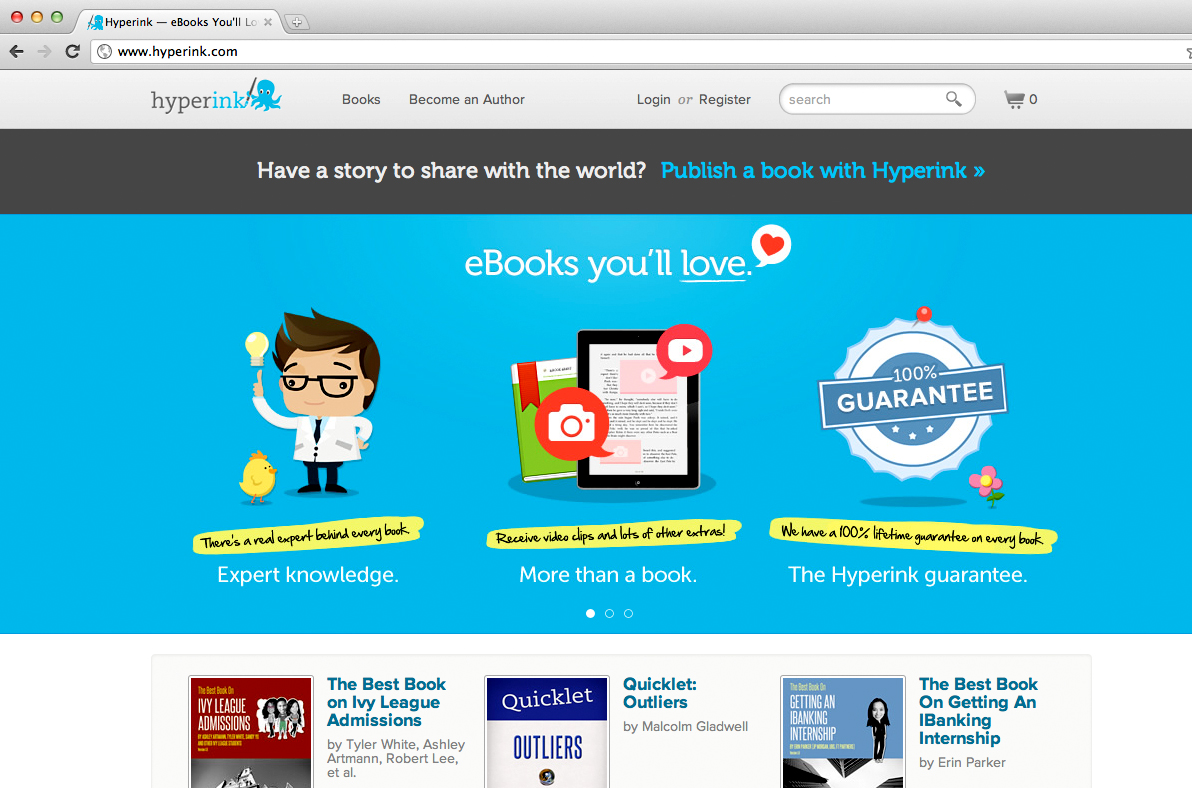 Unlike traditional publishers that take ages to get manuscripts into print and on shelves, Hyperink’s quick and easy to read e-books are ready in a month and cost about $1,000 to produce. Part of the revolution that’s driving a revision of the publishing industry, Andreessen Horowitz liked the business model so much that the investors in Skype, Facebook and Twitter are backing the business to the tune of $1.2 million. By MANDY DE WAAL.

In his book “The Consulting Bible” which shows tells consulting “wannabees” everything they need to know about how to interview for, and land a job, at a big consulting company, Gao explains the searing sea metaphor. “Generally, a project manager or partner will say “Let’s not boil the ocean” as a pretext for suggesting a ton of analyses that in effect, often ends up boiling a very large lake, if not exactly the ocean.”

Gao’s book’s done really well for him. Not only has it edged into six figure territory in US dollar terms, but it helped him spawn an emerging e-book publishing company that Marc Andreessen (yes, the Andreessen from Netscape and Ning who is one of only six inductees into the World Wide Web Hall of Fame) has just invested in.

“When I first left McKinsey I really wanted to start my own company, but I wasn’t sure exactly what kind of company to start,” says Gao the co-founder of next-generation e-book publishers Hyperink, speaking to Daily Maverick from San Francisco in California.

“The one thing I knew about was how to get a job in a company like McKinsey and what it was like to be a consultant. I also knew that a lot of college kids would be interested in this information and I’d always had a passion for writing, so I decided to write a short book, a guide for them. The primary motivation for me was that I had this knowledge that I really wanted to share with the world, and I found a way to do so.”

That book became “The Consulting Bible”, which was Gao’s first e-book and kicked off a chain of events that would see the Stanford graduate exit start-up incubator Y Combinator and meet Andreessen. Y Combinator is a successful seed capital company that funds a big number of start-ups twice a year, and which has funded the likes of Reddit, Disqus, Posterous and Dropbox.

“The real vision behind Hyperink is giving people the opportunity to share knowledge that is valuable in a meaningful and quality way that enables them to make money,” says Gao, after realising that his ability to make money from his own e-book was interesting, but not necessarily special. “There are millions of people out there that have had experiences like I did with my first e-book,” he says.

Hyperink focuses on high quality content that is strongly niched and aims to simulate a real world book store environment by enabling people to browse more than a bit of content. “Our point of departure is that you can read a lot of the content of any book for free,” says Gao. “If you go into a local bookstore the first thing you do when you are looking for a book is to browse. You pick up a book, flip through the pages and read part of the book to get a sense of whether it is worth buying. That is what we are doing.”

Let’s say you are a ninja coder who enjoys tinkering with Android, you can go to Hyperink and take a look at “The Best Book On Marketing Your Android App” which is written by Eddie Kim. An independent Android dev man, Kim has created apps like Car Locator and Smarter Alarm. Kim makes about $100,000 from Android apps and believes that other ninja coders can emulate this success.

What’s interesting about the way Hyperink markets these books is the amount of free reads and information available on each book. Kim’s book on marketing Android apps is part of a “Best Book” series (like those hugely successful “Dummies” books), and the sales pitch includes an an overview of the book, a video interview with Kim, and testimonials from people who have read and used the book. There’s also a complete chapter break down with about eight free sections to read from the 50 page book. Priced at $25, there are a host of links to more ideas and articles written by Kim on the subject which give readers a good idea of the value they’re getting from the book.

“There are a significant number of people who read parts of the book on Hyperink, and buy the book. We think that way of marketing works really well,” says Gao who is taking a long tail approach to publishing. The long tail, or the rise of the niche, was of course popularised by Wired editor-in-chief Chris Anderson in a 2004 article that eventually became a best-selling book called “The Long Tail: Why the Future of Business is Selling Less of More”.

The niche topics that become e-books at Hyperink include a range of how to’s like “Getting Corporate Law Jobs”; “Dating For Singles Over 40”; and “Getting A Venture Capital Job”. For time pressed readers there are “Quicklets” which are like non-fiction e-book versions of Readers Digest condensed books. Basically if you want to read about the causes and effects of globalisation without labouring through 600 pages of Thomas Friedman’s “The World is Flat”, you can quickly peruse a 50 page or so Quicklet, and according to Gao you’ll know all you need to know. All of Hyperink’s books are short format, about 30 to 50 pages or so in length, and range between $4.95 and $25.00 an e-book.

What’s smart about Hyperink is that it is turning the publishing world on its head by using search marketing to understand what’s niche and what the market wants. Traditional publishing is supply driven and brands like Penguin sort through masses of manuscripts to find the right one to publish, whereas Gao’s approach is to find out what’s on trend by analysing Google search and marrying that with competition data.

The other clever part of the business model is that books are produced quickly and efficiently. Publishers can take as long as two years to publish a book and then there’s the crippling print costs and cuts that must be given to distributors and book stores. Hyperink can get a book out in as little as a month and costs about $1,000 or so to publish.

Gao, who is currently recruiting writers for the e-books, believes that unlike content farms that spew forth onto the internet, Hyperink is a place where authors can make a real living. “Our e-books are really doing well and we primarily work with two types of people. One is professionals who are busy and want the fastest and highest quality way to publish a book, but they do not have the ability to publish it on their own. The second is the stay at home moms, and people who have a part time job or aren’t working and we are a way of generating some valuable income and share their knowledge.” Hyperink gets ghost writers to help the professionals, and authors get no advances, but revenue sharing is much more favourable than with traditional publishers and writers for Hyperink get as much as a 50% cut of the books they write.

Research from the Book Industry Study Group (BISG) shows the explosion of e-reading devices like Kindles and iPads has seen a hike in the percentage of print book consumers who are now downloading e-books. BISG’s research shows that 5% of print book fans say they downloaded e-books in October 2010, but that this rose to 13% in January 2011. Two thirds of those surveyed said they now favour e-books over print.

“Digital books and e-books are set to grow at an enormous rate, but I doubt that print books will die in the way people have predicted. They’ll be here for quite some time to come,” says Gao. “But the ability to read a book wherever you are – on your laptop, mobile phone or on a tablet and to buy a book instantly will change publishing. Niche publishing is going to grow, and this publishing explosion will at last enable people to buy the kinds of books they’ve always wanted.”

With the sale of hand held devices going through the roof and e-books becoming increasingly popular, it is more than likely that robust technology is just what Hyperink will need to support its growth. DM