Deng Xiaoping and the creation of contemporary China 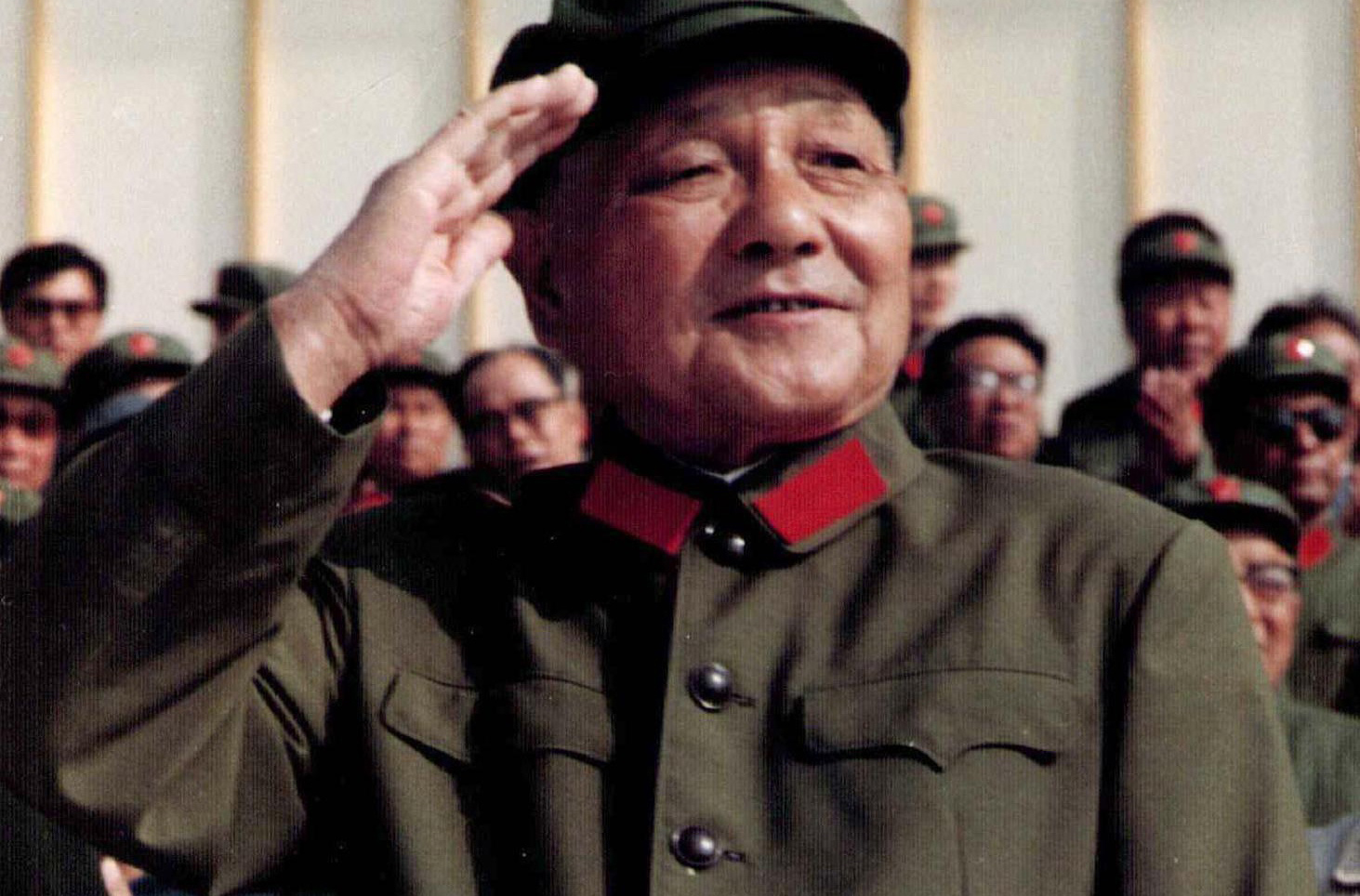 There is a popular Texas expression of disdain for someone who talks the talk but can’t really walk that walk. Down there in Rick Perry country, they say such a man is “all hat but no cattle.” Deng Xiaoping was mostly ten-gallon hat in the famous photograph, but he was definitely lots of cattle too. And Deng is now the subject of a doorstopper of a biography, “Deng Xiaoping and the Transformation of China” that is more than just the story of the rise and fall and rise of one of the men who created contemporary China – and the one who probably did the most to launch China on its way to becoming the world’s new economic juggernaut. By J BROOKS SPECTOR.

One of America’s most versatile Asia scholars, Ezra Vogel, now 81, has taken on the task of chronicling Deng Xiaoping’s life and defining his importance, thereby giving readers a roadmap for assessing the impact of Deng’s life on China – and the rest of us. Vogel is a distinguished “old hand” when it comes to understanding and explaining Asia. He first fastened his attention on Japan with his influential volume, “Japan as Number One,” as both an exploration of Japan’s successes and as a cautionary tale of America’s relative failures and stumbles in the face of the Asian challenge. Vogel then moved on to a consideration of the “Four Little Dragons” of Asia – South Korea, Hong Kong, Taiwan and Singapore – as a way of understanding how Japan’s lessons had been taken on board by the next generation of Asia’s rapidly modernising economies. Logically enough, Vogel then turned his gaze onto China – and on the man who did so much to pull the country back from the chaos of the Cultural Revolution and steer it onto its current path.

To help get the nuances right in his understanding of a changing China, Vogel moved himself for a stay in Guangdong, China to get a better sense of how Deng’s decisions were affecting China at the village level – rather than doing the more usual thing of staying the more cosmopolitan Beijing or Shanghai. Along the way, too, Vogel spent a few years with the CIA’s in-house think-tank, the National Intelligence Council, trying to get a handle on the whole picture of how modernisation is affecting East Asia – and how that modernisation was affecting America as well.

In a biography of Deng, Vogel has picked the right subject. As MIT’s Edward Steinfeld says in his review:

“What to make of the elfin man who in 1979 charmed Americans by donning a cowboy hat during his visit to a Houston rodeo, but ten years later ordered an all-out military assault on unarmed protestors in his own capital? What to make of the revolutionary transformation to which he is justifiably and inextricably linked, a bewildering metamorphosis that has turned China into a global economic powerhouse, a playing field for unbridled capitalism, and home, too, to one of the world’s last and most expansive single-party states?”

While Deng was not the actual initiator of the post-Mao, post-Cultural Revolution reforms – that honour more truthfully belongs to Hua Guofeng – Deng was their hands-on manager and the guarantor of their success. To know Deng Xiaoping, as Vogel explains, is to come to know contemporary China. And as Chris Patten explains “Deng carefully put the pieces of the smashed nation back together again and launched China on its recovery to become assuredly once again the world’s largest economy.”

Unlike Mao Zedong who was internationally named “The Great Helmsman” for his cosmological vision for China, Deng became the “Steel Factory”. He was grounded in the pragmatic and practical, as a man focused on moving forward one step at a time. Deng was hungry that China should gain the prosperity and power enjoyed by France, the United Kingdom, Germany, the United States, and Japan, but not for him, though, was Mao’s dream of a continuous revolution, ultimate class struggle, and constant revitalisation through constant upheaval.

The first impetus for Deng’s vision seems to have come from a stint as a teenaged temporary worker in France – way back in the 1920s – and then reinforced during various state visits to the West in the 1970s. From this travel, Deng drew one big lesson – China was desperately behind in everything tangible. By contrast, he was less concerned with those intangible things like the rule of law, human rights or individual freedom. To catch up first was key.

Vogel adds to his portrait by explaining that Deng had decided that his one fixed star would be unfaltering loyalty to the Chinese Communist Party. By the time Deng came to unchallenged power at 74 years of age, he had already had a long run and numerous adventures: escaping into the Soviet Union, staying out of Chiang Kai-shek’s grasp, taking that Long March, serving as a general (without worrying overmuch about the terrible lists of casualties he produced), and then the long years as a senior party functionary – being purged from leadership positions, not once but three times for all his efforts. But to see the centrality of absolute party loyalty for Deng is also to see a connection to what is almost certainly the most troubling element in Deng’s life story: his willingness to crack down – hard – on the freedom protesters in Tiananmen Square in 1989, regardless of the repercussions at home or abroad.

Total commitment to party is one thing, what is less immediately obvious is how Deng rationalised his adherence both to the party and to his unbundling of state control over every jot and tittle of industrial growth, development – as well as the myriad of economic signals imbedded in the modern economy he had helped bring into being. Perhaps an answer lies in his unremitting commitment to creating a China that had finally caught up with the West, regardless of cost, and all without a master plan to cover all the details.

Despite the great praise already being lavished on Vogel for his magisterial portrait of one the great leaders of the 20th century in Asia, some have pointed to Vogel’s seeming willingness to soft pedal criticism about Deng’s role in ordering the Tiannanmen Square repression. This seemed a stance startlingly at odds with the West’s view of him as the quintessential reformer. But Chris Patten notes in addition “Deng’s rule in the south-west of China, including his native Sichuan from 1949-52, gets just a page and a half. It was sufficiently brutal to earn Mao’s approval. Larger landlords were attacked and killed. One day we will presumably learn more about Deng’s methods at this time; they were plainly not for the squeamish.”

Taking the larger view, Vogel argues that Deng’s real orientation was that of a results-oriented policy experimenter, and it is a stance that underpins Chinese governance in the present. It is true that Deng took this path in the face of considerable risk – both to the possibility of individual failures and also to the party’s control of China in the face of success. How so? Deng cast his lot with technocratic experts over the Chinese version of deployed cadres. And ultimately, in lessening party and state control over the lives of individual citizens, Deng dramatically increased the number of voices who can legitimately claim to speak for China’s future.

But, given Deng’s ambivalence on the larger democratic project, Vogel quotes an anonymous party leader who compared Deng’s political philosophy to the ancient Chinese tale of Lord Ye and his view of dragons. As Vogel quotes him, “Lord Ye loved looking at a book with pretty pictures of dragons but when a real dragon appeared, he was terrified” thereby drawing attention to the very real possibility of inconsistencies between words and actions.

With its careful examination of the way Deng picked out the bright threads of the experimental possible from the fabric of the doctrinaire, Ezra Vogel’s “Deng Xiaoping and the Transformation of China” – or at least a really good, carefully abridged version of it – should sit on the bedside table of everyone who claims to be in favour of instituting that Chinese-style developmental state in South Africa. But just as long as they don’t study Deng’s life for a how-to guide in imposing the party’s iron grip over a large, fractious country. DM