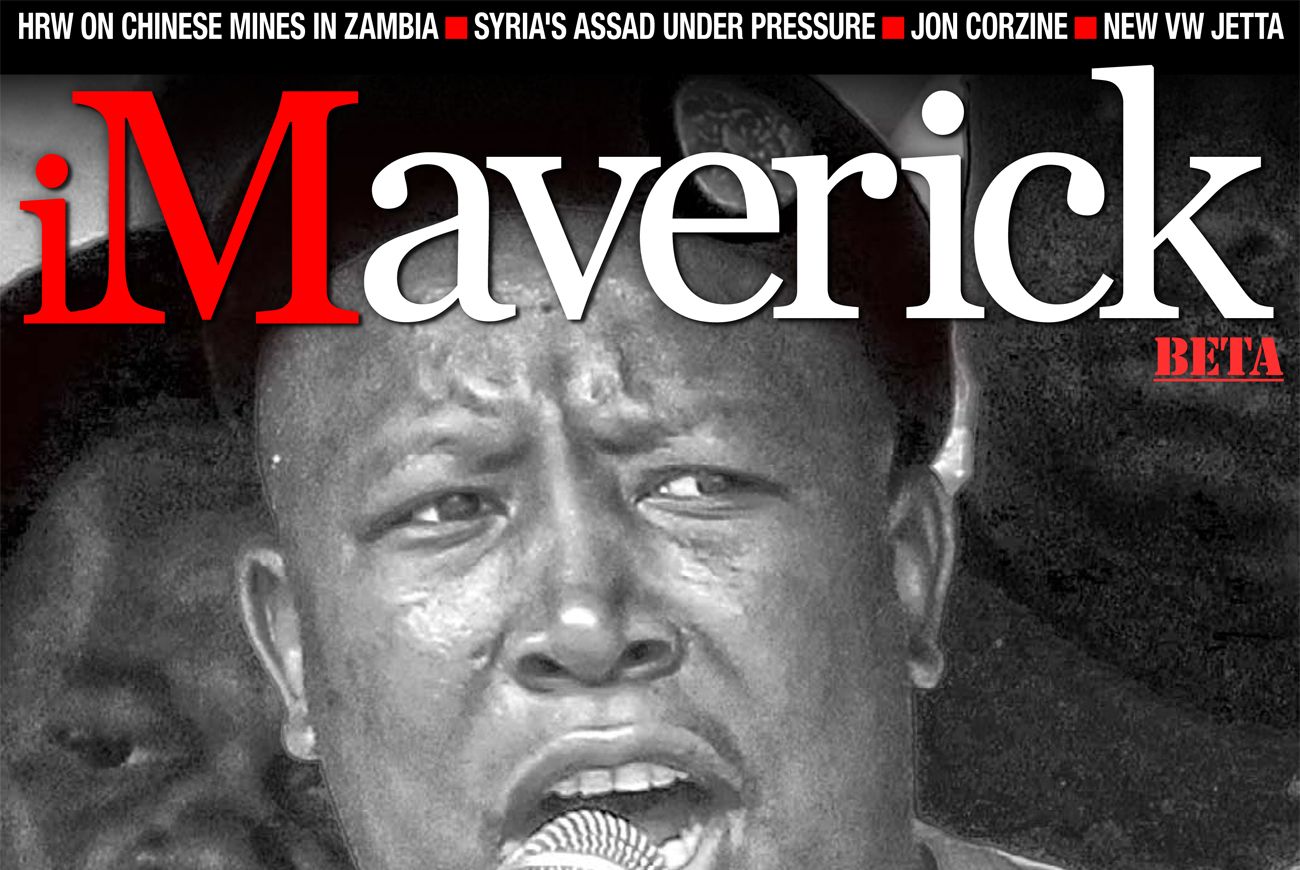 Julius Malema disciplinary hearing: the ANC dares not spare the rod; Human Rights Watch report on on Chinese mines in Zambia; Syria's Assad under pressure; Jon Corzine, the ex-governor who lost half a million; and the new VW Jetta. By iMAVERICK TEAM.

XHANTI PAYI: OUR BLACKNESS CONDEMNS US TO SERVITUDE

Could Lindiwe Mazibuko be a young black woman, free in thinking and being, able in speech, and capable and talented to genuinely lead a “white” organisation? Or is she forever destined to be a servant of white interests? It is indeed an indictment on how we view ourselves in the context and time when we ought to be free.

Amendments to the Films Act, which introduced a new raft of pre-publication checks on sexually explicit content, have been declared unconstitutional by the Pretoria High Court. The action against the law was brought by Print Media South Africa and the South African National Editors Forum. By SIPHO HLONGWANE.

A low-intensity diplomatic war is simmering in West Africa, with the governments of Guinea and Senegal becoming increasingly petty in demonstrating their mutual dislike. But the spat has its roots in an accusation that – if true – is very serious indeed. By SIMON ALLISON.

In possibly the first example of a blog causing a diplomatic incident, Britain’s social media-savvy ambassador to Sudan was censured by the government for comments made on his blog. Not that he’s taking much notice. By SIMON ALLISON.

The Tunisian government has issued an arrest warrant for Suha Arafat, the widow of former Palestinian leader Yasser Arafat, in connection with a corruption investigation. Arafat has been summoned for questioning as part of an investigation into high-level corruption by government officials, including ousted President Zine El Abidine Ben Ali. By KHADIJA PATEL.

How long can James Murdoch possibly hang on to his position? As he gears up to face the parliamentary committee again next week, that same committee has just released a stash of documents internal to News International which prove that the knowledge about phone-hacking within the organisation dates back to at least 2008. By REBECCA DAVIS.

Nations are realising that cyber security is becoming more of a threat than ever before, but there’s scant agreement on how to combat it. There’s a shared realisation that no country can shoulder the burden alone, but cooperation is going to extremely difficult under the current climate. These were some of the emerging sentiments at a global Internet security conference in London. By SIPHO HLONGWANE.

Cement maker AfriSam admitted that it has been operating as a cartel, and settled with the Competitions Commission. By SIPHO HLONGWANE.

A victory has been won by climate change scientists in the US after a judge denied permission to a pro-industry think-tank to access private emails at the University of Virginia. The group alleged the scientists were falsifying data. By REBECCA DAVIS.

HAVING A BOOK COLLECTION IS SO LAST-DECADE

In Japan the practice of converting your hard-copy library into a series of PDFs is reportedly increasingly common. Now services for taking care of this are starting up in the US too. By the way, your books then get destroyed unless you pay extra. By REBECCA DAVIS.

SKY’S THE LIMIT FOR MESSI

Lionel Messi is 34 goals short of becoming Barcelona’s all-time top scorer after netting a hat-trick in the Champions League on Tuesday, and the only real question left is when he will achieve that accolade and not if. By REUTERS.

Australia has joined the chorus of cricket administrators hailing the conviction of three Pakistan players for spot-fixing in London, maintaining that fighting corruption must be a priority for the game. By REUTERS.

The Crusaders have named all four Whitelock brothers in their squad for next year’s Super Rugby competition. By PlanetRugby.com.

MALEMA DISCIPLINARY: SPARE THE ROD? THE ANC DARES NOT

On Wednesday the chair of the ANC’s disciplinary panel, deputy science minister Derek Hanekom confirmed that he and his fellow panel members (lucky them) will hand down their decision in the Julius Malema case next week. From whichever angle you look, the panel’s decision will have long-term consequences for ANC’s future. By STEPHEN GROOTES.

MOGOENG’S FIRST DAY ON THE JOB

The role of the judiciary took centre stage on Tuesday as the national assembly bade farewell to Sandile Ncgobo, the former Constitutional Court chief justice, and welcomed his successor Mogoeng Mogoeng. The comments made by the ANC and President Jacob Zuma, appear to be part of a ominous desire for unencumbered power. But to what end? By OSIAME MOLEFE.

Before you start pelting me with tomatoes and calling me crazy (again), consider how the role of the pointsmen is like putting a plaster on a bullet wound. By STYLI CHARALAMBOUS.

HUMAN RIGHTS WATCH ON CHINESE MINES IN ZAMBIA: THE HORROR, THE HORROR

It’s not a good time to be a Zambian miner in a Chinese-run mine, according to the Human Rights Watch report released on Wednesday, which outlines systematic human rights violations which are a serious threat to the safety of workers. But this might be about to change if the new government of Michael Sata makes good on his pro-people rhetoric. By SIMON ALLISON.

After losing an earlier ruling that said he had to travel to Sweden to answer sexual-impropriety charges, Julian Assange of WikiLeaks appealed the verdict. On Wednesday morning, he lost that appeal too. He could still appeal to the British Supreme Court, but it is a matter of ‘when’ Assange goes to Sweden, not ‘if’. By SIPHO HLONGWANE.

THE LIFE AND TIMES OF JON S CORZINE: HOW THE EX-GOVERNOR LOST MORE THAN HALF-A-BILLION BUCKS

You know the feeling. there was a wad of R100 notes in your pocket, and you don’t know where it’s gone. Could you possibly have dropped that much at ZAR last night? Or is the maid up to something fishy? Now, picture Jon Corzine’s pain. He’s mislaid six-hunreed-million large, and the US government is coming to find it. By RICHARD POPLAK.

Violence continued in Syria on Wednesday with at least nine deaths reported even as the Arab League announced that the Syrian government had agreed to a plan to halt the crackdown on anti-government demonstrators. By KHADIJA PATEL.

WESTWOOD READY TO GO ONE BETTER

Having narrowly missed out to Francesco Molinari by one shot last year, Lee Westwood only has one goal at the WGC-HSBC Champions this week. By Golf365.com.