As Palestine gains full membership, the US cuts Unesco’s funding 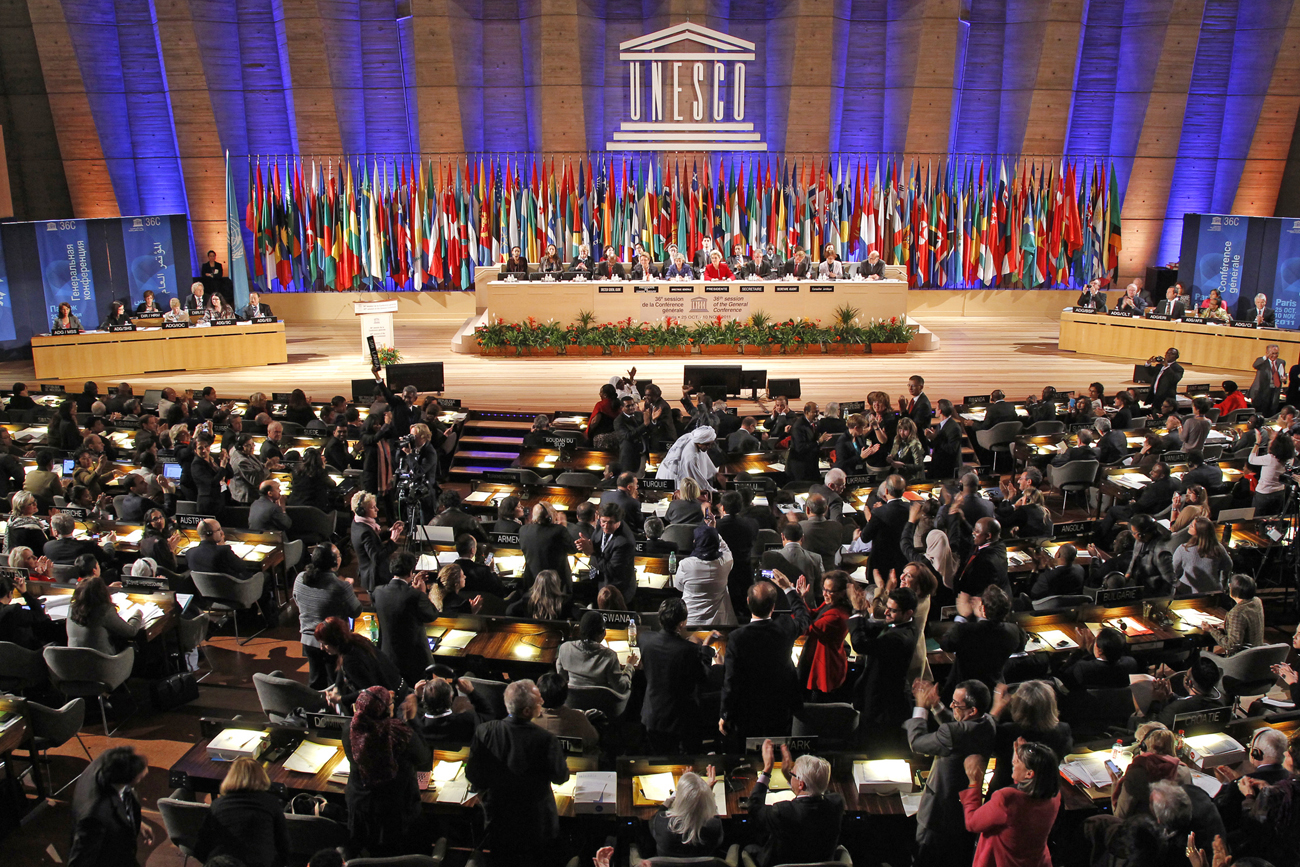 The board of the UN Educational, Scientific and Cultural Organisation (Unesco) voted on Monday to grant full membership to Palestine, forcing the United States to cut funding to the organisation. Overnight, the global organisation has been plunged into deep crisis. By KHADIJA PATEL.

The United States announced on Monday that it will cease financial contributions to Unesco after Palestinians were granted full membership to the organisation. “We were to have made a 60 million dollar payment to Unesco in November and we will not be making that payment,” State Department spokeswoman Victoria Nuland is reported to have told reporters.

The admission of Palestinian membership to Unesco significantly bolsters Palestinian efforts for international recognition as an independent state in the UN General Assembly. The bid at Unesco required a two-thirds majority in the vote to be successful, and delegates approved the motion by a landslide victory of 107 to 14, with 52 abstentions. Notably, France voted in favour of the motion, as did the vast majority of Arab, African, Latin American and Asian nations, including China, India and South Africa. Israel, the United States, Canada and Germany voted against the motion. Intriguingly however, Brazil veered away from the stance of its Ibsa partners and abstained from the vote, emulating instead the stance of Great Britain and Japan.

Both the US and Israel are strongly opposed to the Palestinian cries for attention in the UN, claiming it endangers efforts to restart the peace process. The Palestinians however maintain that they are entitled to pursue membership at the United Nations, and remain prepared to return to negotiations if certain conditions are met. Crucially, the Palestinians require a halt to Israel’s expansion of settlements before peace talks are restarted.

With no such commitment forthcoming from the Israeli government, Palestinian Authority President Mamoud Abbas has selected to show up the Israelis and Americans by courting international approbation of the Palestinian cause instead.
The Palestinian success in Paris significantly bolsters, Abbas but it will prove costly for Unesco. Until Monday, the US was Unesco’s greatest source of funding, footing 22% of the agency’s bills.

The problem, however, does not lie with the Obama administration. American law currently prohibits Washington from funding any UN-affiliated body that accepts Palestinian membership. The law states, “No funds authorised to be appropriated by this Act or any other Act shall be available for the United Nations or any specialised agency thereof which accords the Palestine Liberation Organisation the same standing as member states.”

This legislation dates back nearly 20 years when the American Congress was opposed to White House efforts to mediate between the Israelis and Palestinians. Congress passed a number of pieces of legislation intended to block the normalisation of Palestinian relations in the international community. Critically, the law does not allow for the American president to waive the requirements of the law, even in cases where vital US national security interests are at stake.

As much as Unesco may suffer a great blow to its purse, the US government may also face harsh consequences for having its hand forced in pulling its funding from the organisation. Nuland noted, “Under Unesco’s constitution, a member state will have no vote in the general conference if it gets more than two years in arrears in its contribution. So our actual arrearage status will begin in January. Not paying our dues into these organisations could severely restrict and reduce our ability to influence them, our ability to act within them, and we think this affects US interests.” Nuland indicated however that the administration would look for a way to rewrite or work around the law. “We need to have conversations with Congress about what options might be available to protect our interests,” she said.

Analyst Jonathon Allen points out that “the funding cut-off could also have far-reaching effects for American tech companies, such as Apple, Google and Microsoft and movie studios that use Unesco to open markets in the developing world and rely upon an associated entity, the World Intellectual Property Organisation, to police international disputes over music, movies and software.”  The US is well aware of these consequences and the State Department on Monday invited representatives of about two dozen technology and pharmaceutical companies and associations to participate in a discussion of the matter.

Lara Friedman of Americans for Peace Now is, however, unconvinced of the chances of Congress softening its stance. She notes, the chances of American lawmakers changing the legislation to “avoid a crisis at the UN are low to non-existent, despite the fact that cutting off funding to Unesco and other UN agencies would clearly be detrimental to US interests.” The US is then in an especially difficult position.

Aside from raising the ire of the uncompromising Lieberman, the PA’s victory at Unesco remains a symbolic one. Abbas indicated that he would use Palestinian membership at Unesco to seek world heritage status for the Church of Nativity in Bethlehem. If Unesco does approve the Bethlehem church as a world heritage site, the Palestinian Authority will be bolstered by Unesco funding for the preservation of the site. But the gap left by the Americans in the Unesco budget may actually hamper the preservation of world heritage sites. There is ultimately little change to be felt on the Palestinian street by such victories. DM