Kings of Leon: anything but a royal performance 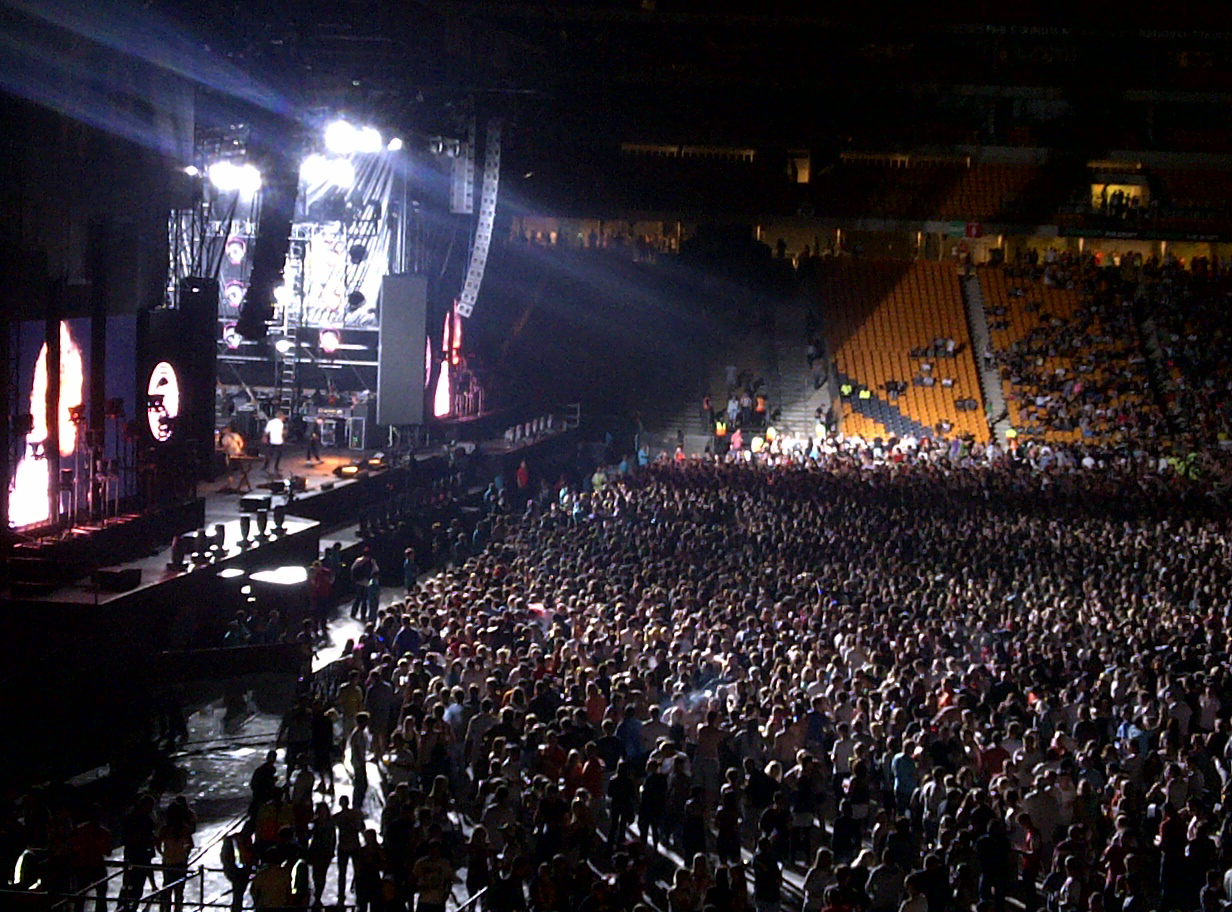 Call me old. Call me grumpy. Call me anything you like, but please just don’t call me the next time Kings of Leon are in town. A live concert review by STYLI CHARALAMBOUS.

The day started with an air of excitement even as Jozi’s place on the live concert calendar had been firmly cemented with the deluge of great acts recently. The Killers, U2 and Coldplay are just some of the biggest acts to have rocked Jo’burg’s arenas in recent times.

Yet there was a still an eager anticipation to see this genuine American rock band strut their stuff at what must surely be one of the best live-event venues in the world, FNB Stadium. Having postponed the earlier April tour date due to a broken arm by drummer Nathan Followill, fans would have been regularly peeking at the new ticket stubs, willing the revised concert date to magically arrive sooner. Their hits Use Somebody and Sex on Fire have been responsible for some of the biggest post-party hangovers and air-guitar dance floor sessions in the last few years, which would only have added to the Jozi crowd’s expectations.

I found myself in a minibus full of eager revellers meandering through some of Jozi’s classic warm-up spots, complete with over-stacked cooler boxes and a lone David Guetta CD blasting from the sound system.

The antiquated Honey Rock Motel did an exemplary job, lining our bellies with an impressive array of Portuguese dining, topped off with a Mexican aperitif that would ensure the mini-bus-induced buzz of phase 1 of Operation KOL continued well into the following stop on our Jozi tour.

Next stop was Soweto, for the “cultural” chapter of the day’s excursion, joining the hundreds of people lining the restaurants and shebeens of Vilakazi Street. The local vendors, following the World Cup and various Soweto rugby matches, by now know to expect half of the 20- and 30-something population of Sandton and Fourways every time a music concert or sporting event is staged at the Calabash.

It was great to see visitors (read whiteys) who would have never dreamed of sipping a Black Label quart inside a corrugated tin shebeen, enjoying a session of Saturday afternoon revelling. Some even shedding the stiff white man stereotype to engage in a kwaito dance-off with enthused locals. Not exactly the kind of change of Nelson Mandela once dreamed of, but change nonetheless, albeit somewhat weird and wonderful.

With the Lions cruising to a richly deserved Currie Cup win on the big screens in the background, and darkness beginning to set over Soweto it was time for our patient and trusty driver, Max, to navigate through the scrum that is Orlando traffic to the stadium in time for the KOL appearance. Broken traffic lights at a major intersection meant we inched through a mass of vehicles that would have resembled a plate of Italian pasta, when viewed from above. Amazingly, tempers never flared even as some cars crossed island barriers and manoeuvred their way past oncoming queues of traffic.

Even as our adventure through the spaghetti junction ate into our time, we managed to arrive inside the stadium as the final supporting act were concluding their set. Not quite the turnout for a U2 gig, but the event still drew a healthy crowd of about 60,000 people, with many in attendance having taken the opportunity to brush the dust off their lesser-spotted Lions jerseys for a rare public display. (Btw, did I mention the Lions won the Currie Cup?)

My first thought as I entered the stadium was that every band should have a 360-degree stage like those granddaddy rockers from Dublin, and already my reservations of watching a band who’ve only produced two chart-topping hits were starting to set in. With beers in hand, we knew the brothers Followill from Oklahoma would soon be appearing as we jockeyed for closer position to the stage.

But we needn’t have bothered. Kings of Leon were just woeful. The music was loud and clear, and like all great rock concerts, shook the stadium as their guitar riffs bellowed from the massive speakers. But lead singer Caleb Followill, delivered a performance that was drier than a packet of Marie biscuits left in the African sun. With about as much stage presence as a couple of mannequins, this band of brothers aimlessly drifted through their set with a few weak attempts to engage the crowd.

Even more feeble was the ploy of leaving the stage and feigning the end of the show, to induce the crowd into a bout of self-glorifying chants of “We want more”. Without yet having belted their most successful single Use Somebody an angry revolt was probably on the cards if KOL had ended the night depriving their fans of the hit song. And like a teenage schoolboy that had been teased for an entire evening waiting for a kiss, the crowd exploded with a sing along rendition of the track that would have offered some respite to an otherwise lacklustre show.

It was as if the band were disconnected from themselves and the audience, kinda like robots walking around on stage strumming guitars and banging on drum sets, devoid of any soul. If like me, you imagine the clichéd pre-show routine of hard rockers to be that of consuming copious amounts of hard liquor and recreational drugs; someone must have switched the KOL stash with a pile of sedatives instead.

In fact, I would go so far as to say the highlight of the show was the fireworks display closing the night. Caleb muttered something about loving South Africa and wanting to come back again, I sincerely hope it’s for a safari or beach holiday. KOL were rather KAK and left me longing for those two hours of my life back.

So dear reader, by now you may have noticed the majority of this review was dedicated to my city-crossing journey in the build-up to the show, rather than the band’s performance on the night. Which is just my small tribute to Jozi, its shebeens and its people that were way more entertaining than the Kings of Leon. DM