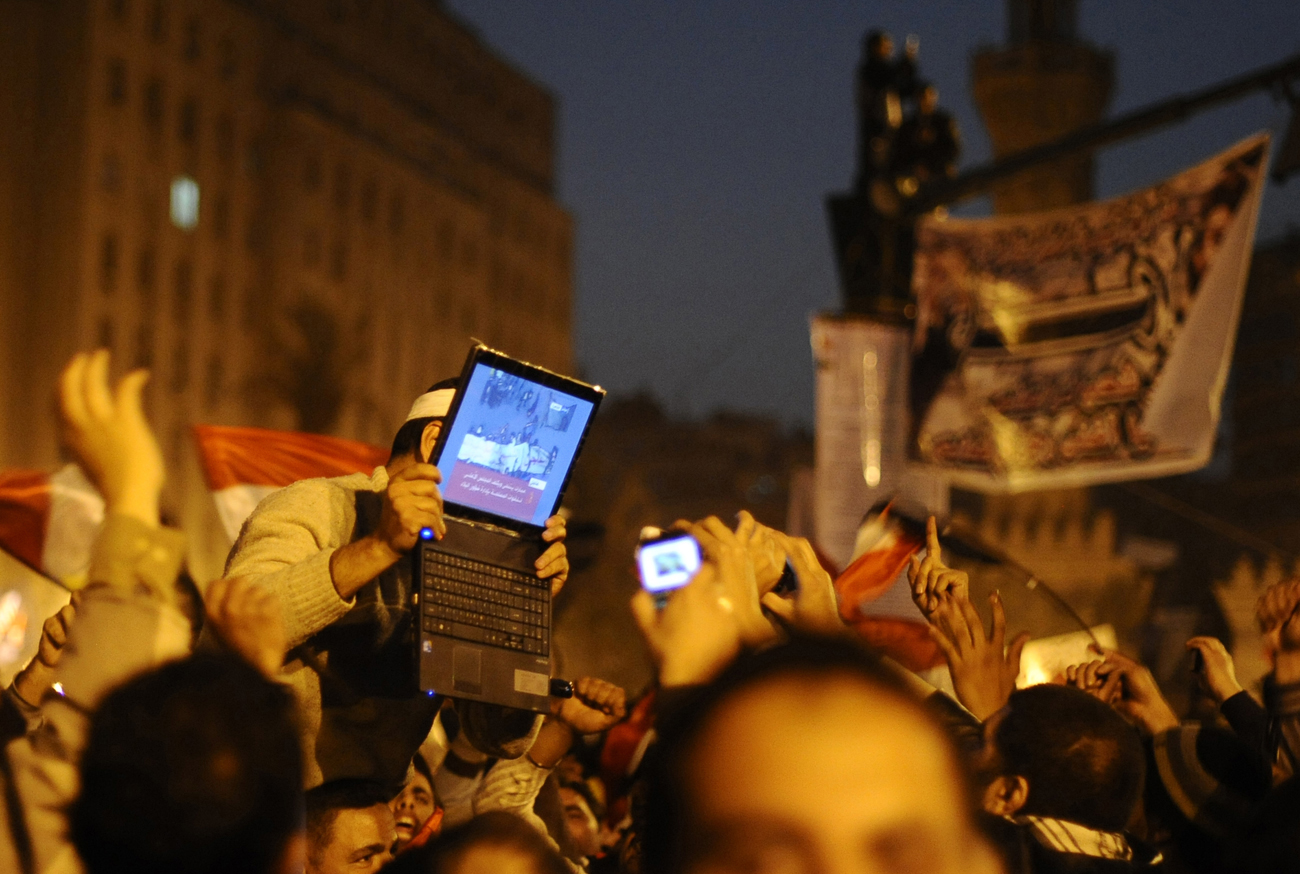 Just days after US President Barack Obama called on Egypt's military to lift a state of emergency and end military trials for civilians, prominent Egyptian blogger and activist Alaa Abd El Fattah was remanded into military custody. The revolution may have rid the Egyptian people of Hosni Mubarak but his modus operandi survives in the military junta that has assumed the vacuum of power in the North African state. By KHADIJA PATEL.

When the uprising against Hosni Mubarak broke out on 25 January this year, Egyptian bloggers Alaa Abd El Fattah and Manal Hasan were planning to entertain their friends in their new home in Pretoria. They had finally left the inner city grunge of Sunnyside for suburbia. But they would not remain mere spectators to the revolution for too long.

“We can’t take it any longer to watch this moment from far on TV, especially that we feel we had participated in previous actions that led to it. Tonight we fly to Cairo and go to the streets until Mubarak leaves,” Manal wrote to their would-be guests. “Please keep an eye on us, just in case state security detain us in the airport or something. It probably won’t happen but just in case,” she continued.

Alaa and Manal were no strangers to the Egyptian state security apparatus. In 2006 Alaa was arrested during a protest and held in jail for 45 days, sparking an international outcry over the former Mubarak regime’s wanton assault on free speech. Alaa and Manal are renowned for co-founding the Egyptian blog aggregator Manalaa and Omraneya, the first Arab blog aggregators that did not restrict inclusion based on the content of the blog.

A year before his arrest by Mubarak’s forces, Alaa’s blog won the Special Reporters Without Borders Award in Deutsche Welle’s Best of Blogs competition.

It was his job as a software developer that brought him to South Africa. Both Alaa and Manal worked to develop Arabic-language versions of essential software and platforms. After dividing their time between Cairo and Pretoria since Mubarak’s ouster in February, the couple eventually decided to move back to Cairo.

In Cairo, Alaa has persevered with criticism of the military junta in his columns, blogs and widely-followed Twitter account. He drew sharp criticism from some Egyptian quarters for reminding Egyptians that the revolution remains incomplete until a civilian government is in place. When I spoke to him in April this year, he said, “We are not in agreement over whether, the ruling cabal, or the ruling party, or the ruling class are the target of the revolution. What to do with the ruling party and its members is one topic, how deep should ‘cleansing’ efforts go in public and private institutions is another.”

Last Monday as he made his way to San Francisco to speak at a conference on technology and human rights, Alaa learned that he had been summoned by a military prosecutor. He suspected that he would be charged with incitement to violence and the destruction of public property. When he did eventually face the military prosecutor on Sunday however, he was accused of a litany of crimes including assaulting military personnel, stealing machine guns that belong to the armed forces and inciting violence against the military.

The military alleges that activists like Alaa were responsible for the violence that broke out between Coptic Christians and the military on 9 October. Egypt’s Coptic community was protesting against an attack on a church when clashes broke out with soldiers outside the state television building. Twenty-five people died in the violence, most of them Copts. Witnesses said soldiers fired on protesters and ran them over with armoured cars, but the army strongly refutes these accusations. Instead, the military claims a number of its soldiers died in the clashes.

When he answered the military’s summons on Sunday, Alaa refused to acknowledge the legitimacy of the military to intervene in judicial matters and refused to answer the prosecutor’s questions. In response, he was ordered to be detained for the next two weeks. Another activist Bahaa Saber, faced the same charges on Sunday but was not detained.

The military’s case against the activists was filed by the Ministry of Interior’s Criminal Intelligence Investigations unit. According to lawyers for the activists, a journalist for the newspaper Al-Wafd, Hanan Khowazek, is acting as a witness against Alaa. Khowazek reportedly told investigators that she had seen Alaa removing weapons from military trucks. Other reports suggested that a video of the activists throwing rocks at the army during the massacre was being used to back up the charges of incitement against the activists.

Over 12,000 civilians have been tried and detained in Egypt under the controversial military trials since Mubarak’s ousting in February. Political activists say the army has used the same tactics against dissenters as Mubarak did.

While activists like Alaa continue to campaign for an end to military trials for civilians the Egyptian judiciary is currently embroiled in chaos. A draft law of judicial authority proposed by the Egyptian judges club has prompted strike action from both lawyers and judges over the past two weeks. According to the proposed bill, judges could sentence lawyers to up to five years in prison in cases of insulting the court. The controversial article 18 gives judges the power to detain lawyers inside the courtroom if he deems them disruptive. As lawyers continue their strike, judges have also refused to report to work until they are provided protection, citing assaults by lawyers.

The trial of deposed leader Hosni Mubarak has also been adjourned to allow time for another court to rule on a request by lawyers for the victims to remove the three-judge panel in Mubarak’s trial. On the eve of parliamentary elections the chaos in the Egyptian judiciary may severely hamper the country’s move towards democracy.

Alaa gives a prominent face to the thousands of civilians detained by the military since Mubarak’s ouster but he remains just one of many, many others. DM