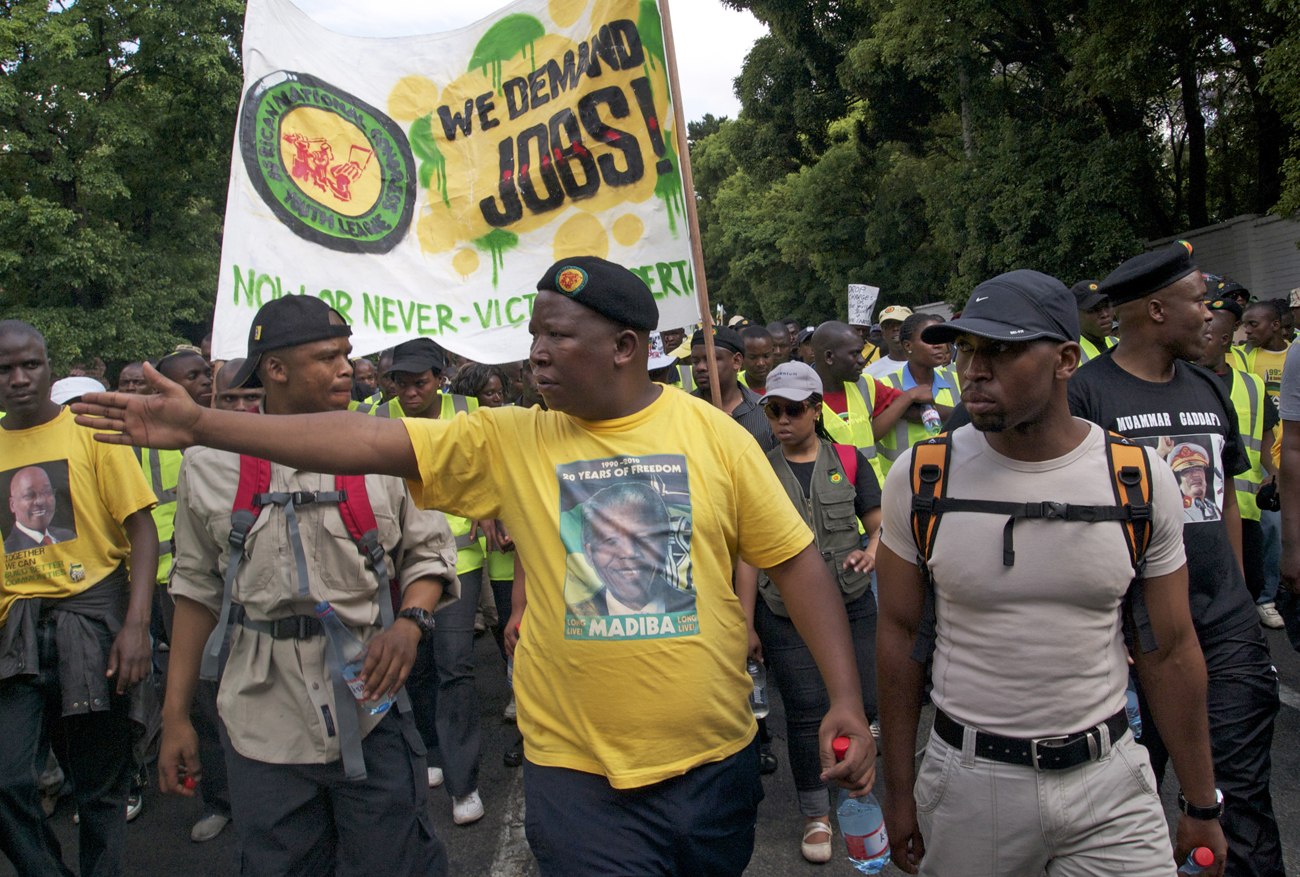 It's not much of a political victory, not yet, but Julius Malema walked himself into renewed favour with his Youth League supporters on Thursday (and early Friday morning) and, thanks to some fortuitous timing, built a whole new category of people who may give him the time of day now. BY PHILLIP DE WET.

It was an audacious plan to begin with. Johannesburg and Pretoria are twin cities, but not all that close by foot for the untrained, unprepared and unsupported. And sticking it to the ANC, and the government, on the eve of a ruling in his ANC disciplinary committee ruling, that was always going to be a gamble.

So when Julius Malema pulled off his trudge to so-called “economic freedom” on Thursday, he cemented his reputation as a militant risk-taker, exactly the kind of adopted attitude that got him elected and re-elected to the League in the first place.

But he also achieved so much more. By going the distance, on foot, suffering the heat and foot sore out in front, he showed himself to be a man of the people. Somebody who shares their suffering (even if he artificially created it in this case), somebody who will go to extraordinary lengths in service of his principles, somebody who can inspire people to achieve things they never dreamed possible.

And yes, Malema did hoof it, all the way from around Johannesburg’s CBD, through Rosebank to Sandton, and at least half-way from there to Centurion before he needed mechanical help – which made him one of the last to turn to a vehicle for a while. In his curiously rolled-up tracksuit pants and his nifty shoes, he walked, and walked, and walked. The rumours that he travelled in air-conditioned luxury were simply false, the pictures you may have seen of him on the back of a truck tell only part of the story; he was a frequent user of the public address system carried by that truck, as he marshalled the troops (and, more often, the marshals), but he’d get down and out in front again quickly, every time. Take it from somebody who was there. The ANCYL on their way from Joburg to Pretoria during the economic freedom march. For more photos of the march by Phillip de Wet and Greg Nicolson, activate your free iMaverick subscription by clicking on the ad at the end of this article.

Make no mistake, this was a Malema show. From the video and posters that advertised the event to the amount of airtime he took up on the public address system on Thursday, the long march through Johannesburg and Pretoria didn’t have any other face. Had he shirked, or been proven a pansy, the whole thing would have collapsed around his ears.

Most curious, though, was the reaction of the middle-classes, Malema’s traditional enemies, as his commitment became clear, and the scope of the ANCYL’s protest ambitions became apparent. They didn’t suddenly agree that nationalising mines or expropriating farmland would be a good idea. They did, however, express admiration, even respect – something that would have seemed unlikely in the extreme the day before.

Perhaps it was the conditions created by the Occupy Wall Street movement and its offshoots in the US. The situation isn’t that different, after all: a group fighting for what they believe is right, even if their solution is dubious, and showing commitment beyond the point where a mentally healthy person would call it quits. If you sympathise with that, it’s hard not to see Malema’s quest in the same light.

A little bit of sympathy can be a powerful thing. Where the chattering classes were dismissive, at best, of Malema before, a kernel of doubt has been planted. Could he be worth listening to? Is there perhaps sense to be divined in the mess that is his ideology? It won’t last, probably, but getting people who normally wouldn’t is the point of any protest. Even if Malema is utterly ignored by the government, and the JSE, and the Chamber of Mines, he’s already succeeded in a small way.

Mostly, though, Malema has suddenly become an inspirational political figure, somebody who achieved a tangible and difficult goal through sheer determination. There aren’t many others we can say that about, and none who can reach disenchanted young people as Malema does. That, too, is a lever of power.

Not a bad profit for a single day in the sun and some very sore legs. DM