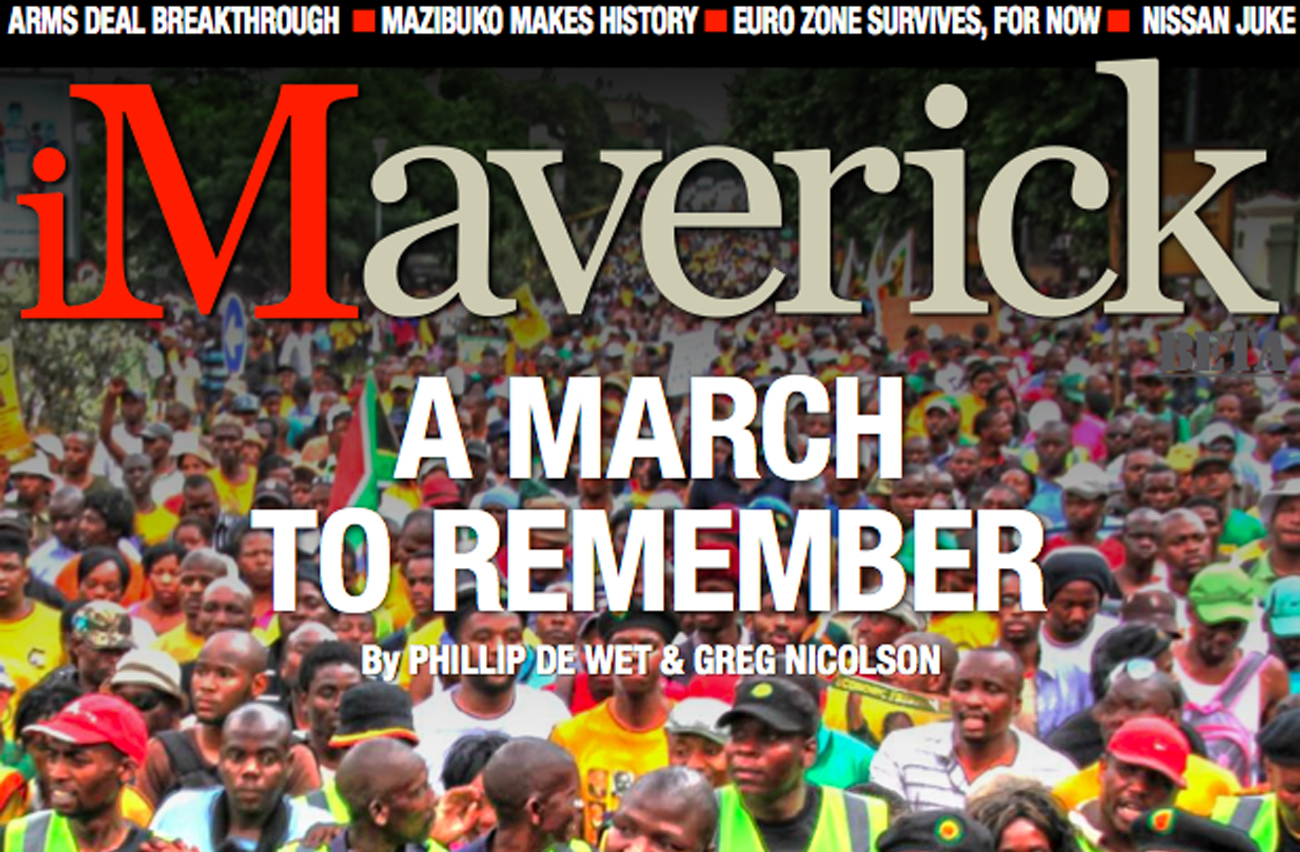 A march to remember

It’s not much of a political victory, not yet, but Julius Malema walked himself into renewed favour with his Youth League supporters on Thursday (and early Friday morning), and, thanks to some fortuitous timing, built a whole new category of people who may give him the time of day, now. BY PHILLIP DE WET.

CARIEN DU PLESSIS: GATEKEEPERS TO BLACKNESS SHOULD CONTEMPLATE THE CAMEMBERT

What’s up with some black people? They’ve been going around, judging folk on not being black (enough) when they do this, eat that, or say such. Census tick boxes aside, why do people still have to pass some prejudiced gatekeeper in order to be permitted to wear the skin they’ve been born with?

ANTONY ALTBEKER: WHY ARE WE SUCH A VIOLENT PEOPLE?

The overall volume of South African crime is not dramatically different from levels experienced in many other countries. What distinguishes South Africa from the rest is the prevalence of violent crime. If you want to find the answer to we are such a vicious people, you need to understand how violence shaped who and what we are.

Correctional Services Minister Nosiviwe Mapisa-Nqakula has caused a stir by announcing the four planned private mega- prisons are no longer needed. But for the bidding consortia it means more than R80 million in the water. CARIEN DU PLESSIS reports.

ANOTHER AFRICAN INROAD FOR CHINA – ETHIOPIA’S RAILWAY TO THE SEA

It’s hailed as exciting news for Ethiopian businessmen and intrepid travellers who miss the romance of trains and railways – Ethiopia has unveiled plans to build a railway line linking its capital Addis Ababa directly with the coastal city of Djibouti, funded by China (who else?). The line will connect land-locked Ethiopia to a port, making it easier for Ethiopia to get goods out, and China to get goods in. By SIMON ALLISON.

Nato and Sudan made for uncomfortable bedfellows in helping Libya’s rebels to victory, according to Sudanese President Omar Al Bashir. Apparently, Sudan provided arms and military support to the anti-Gaddafi forces, a sweet payback for Bashir after Gaddafi’s long history of sponsoring Sudanese dissidents in Darfur. By SIMON ALLISON.

UGANDA ANTI-GAY BILL BACK ON TABLE

It has been reported that Ugandan MPs have voted to re-open debate on the country’s infamous Anti-Homosexuality Bill. Discussion of the legislation was originally postponed because the previous parliamentary session ran out of time, but it seems things are very much back on track now. By REBECCA DAVIS.

In a move which indicates that the impact of the “Occupy” movement may be growing, one of the most important figures of the Anglican Church in the UK has resigned from his post rather than tell “Occupy London Stock Exchange” protesters to move away from St Paul’s Cathedral. By REBECCA DAVIS.

PERRY MAY NOT TAKE PART IN ALL REPUBLICAN DEBATES

Republican presidential candidate Rick Perry, who admits he is not the “slickest” debater, may not participate in all the remaining 2012 debates because there are so many. By Steve Holland (Reuters).

Google went shopping crazy in 2011, especially in the third quarter. The company parted with $1.4 billion for 57 companies. The darling innovator of the Net has gone from a create to a buy strategy of late, prompted in part by the great patent scramble of IT giants like Apple and Microsoft. By SIPHO HLONGWANE.

Facebook announced on Thursday plans to locate its next batch of server farms in a town on the edge of the Arctic Circle. The cold has its uses, it seems. By SIPHO HLONGWANE.

The 17th edition of the Nelson Mandela Challenge will see Co?te d’Ivoire travel to South Africa to face Bafana Bafana on 12 November. By Football365.com.

GAYLE WANTS TO KNOW WHY HE MUST APOLOGISE

Told to retract his bitter criticism of the West Indies Cricket Board if he wants to resurrect his international career, Chris Gayle has asked the WICB what they want him to apologise for. By Cricket365.com.

Arsenal manager Arse?ne Wenger has urged the club’s supporters to stay united in the face of adversity as they brave the challenges of the future. By Football365.com.

Australia captain Michael Clarke is confident that a team effort from his players will clinch an ODI series win over South Africa when the teams clash in Durban on Friday. By Cricket365.com.

NO DEANS OR GATLAND FOR ALL BLACKS COACH

The New Zealand Rugby Union confirmed that several leading candidates have been approached for the All Blacks coaching position. By PlanetRugby.com.

We who make up the South African political chatterati are a very cynical bunch. We have every reason to be. But sometimes, just sometimes, something happens that makes us actually pause in wonder. What has happened with the Arms Deal this week is very nearly one of those times. By STEPHEN GROOTES.

Former DA parliamentary leader Athol Trollip is set to stay on as MP after he was toppled in the party’s mid-term elections by DA spokeswoman and relative newcomer, Lindiwe Mazibuko. Some are quietly hoping that her victory would bring transformation in the party. CARIEN DU PLESSIS reports.

BRAZIL BETS THE FARM IN ZIMBABWE

Brazil’s announced a $300 million gamble in an industry where most people with common sense and a basic grasp of recent history fear to go: Zimbabwe’s agricultural sector. The huge loan deal, which seems to come without strings attached, might not make the most economic sense but is a sign that Brazil is starting to flex its political muscle in the African arena. By SIMON ALLISON.

FIGHTING SOMALI PIRATES – AN EXPENSIVE BUSINESS IN THE LEAN TIMES

The UN says that Somalian piracy costs the world economy between £4 billion and £7 billion each year. Yet so severe is the problem that this week finance minister Pravin Gordhan announced that the cash- strapped South African National Defence Force will receive an additional R81million from the Treasury funds its anti-piracy operations in the Mozambique Channel. By KHADIJA PATEL.

It must have been quite a sight – all those European leaders sitting and sitting and arguing and arguing until 4am until an agreement was reached on how to bring stability to the eurozone. But some fancy footwork and heavy lifting is still left to be done, reports J BROOKS SPECTOR.

A deal struck by eurozone leaders on Thursday to contain the region’s dangerous debt crisis was greeted sceptically in the two countries most in the firing line, Greece and Italy, with some saying politicians were dreaming. By Catherine Hornby (Reuters).

In the schoolyard of industrial relations, it’s hard to know what to believe when it comes to Xstrata’s proposed employee share ownership plan. Is the mining giant racist and anti-empowerment? Or is the National Union of Mineworkers on a power trip of greed? By GREG NICOLSON.

South Africa said on Thursday it would further relax foreign exchange controls to allow companies to top up capital in their offshore businesses and even invest outside their current business lines. By Phumza Macanda (Reuters).

There is a popular Texas expression of disdain for someone who talks the talk but can’t really walk that walk. Down there in Rick Perry country, they say such a man is “all hat but no cattle.” Deng Xiaoping was mostly ten-gallon hat in the famous photograph, but he was definitely lots of cattle too. And Deng is now the subject of a doorstopper of a biography, “Deng Xiaoping and the Transformation of China” that is more than just the story of the rise and fall and rise of one of the men who created contemporary China – and the one who probably did the most to launch China on its way to becoming the world’s new economic juggernaut. By J BROOKS SPECTOR.

No, it’s not a joke. Nissan’s new urban warrior is really called the Juke. And while the edgy crossover vehicle’s design seems dubious on paper, the in-the-metal reality is certain fascinating, if only because there isn’t anything else quite like it. Which is exactly the point. By DEON SCHOEMAN.

SMIT NOT AT SARRIES FOR THE MONEY

Former Springbok captain John Smit is keen to make a big impact for Saracens in the Aviva Premiership this season. By PlanetRugby.com.

Michael Schumacher says the recent deaths that have rocked motor racing are more down to fate than a lack of safety. By Sport365.com.