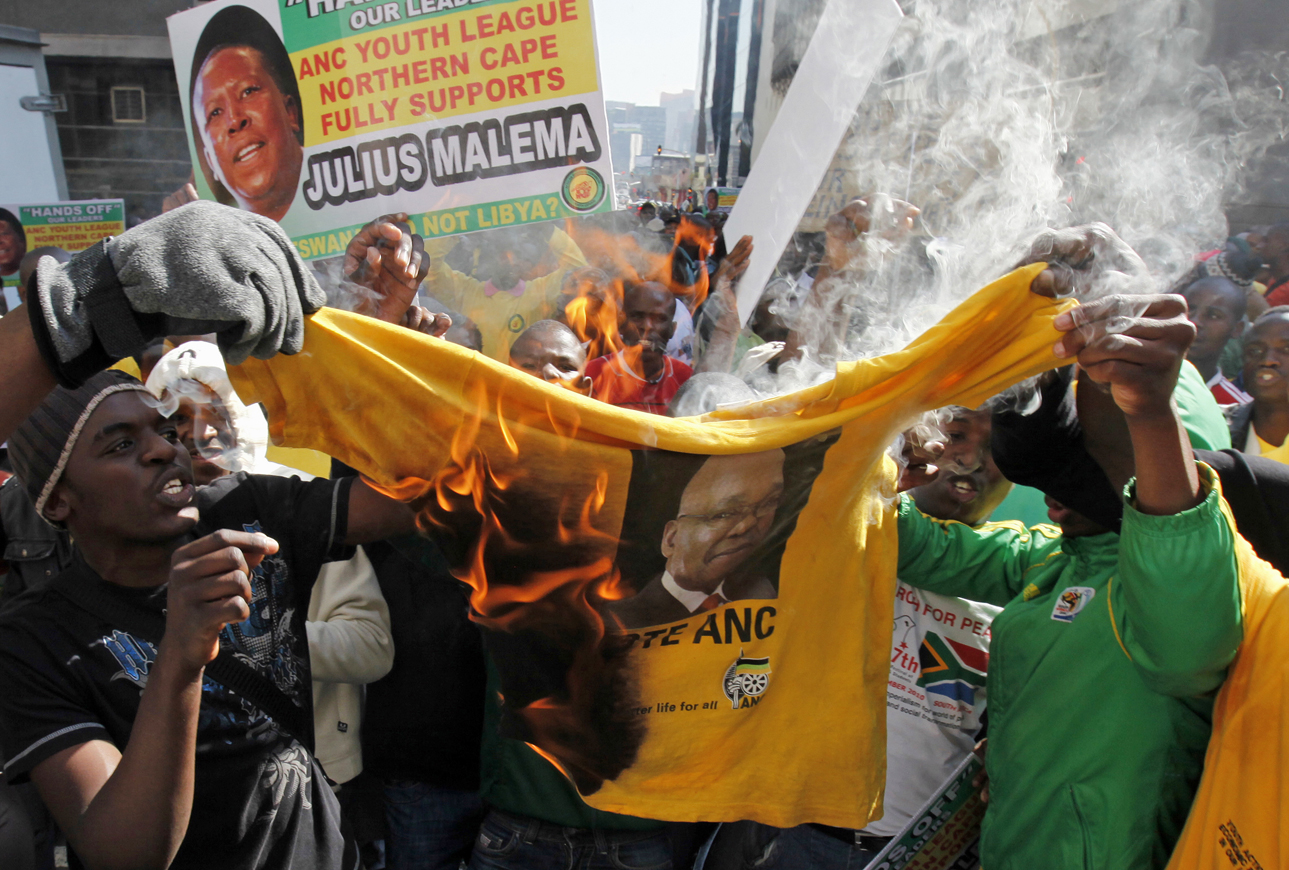 It's often been a mistake to apply the normal rules of physics to Julius Malema. They just don't seem to apply. Take gravity. Normally, high office pulls you down. Not with him. Try the law of entropy; you'd expect a politician to get weaker over time. Not with him. But there is a political physical law that he has a fine appreciation of. It's that to make things happen, you need a focal point. There is a reason why Malema's planning his "Economic Freedom Marches", despite the massive risks. It's because President Jacob Zuma and ANC secretary-general Gwede Mantashe are winning the war of political attrition. By STEPHEN GROOTES.

Do you remember where you were and how you felt when you heard/read that Malema was to face disciplinary charges? For a political nut like me, I remember well the jolt, the electrons moving through the limited number of neurons in my brain – I knew this changed everything, the defining political force of our time was about to change direction. Right. How do you feel now?

When Malema’s disciplinary hearing started, there was a bang, a focal point. About 500 similarly minded friends trashed the Joburg CBD and raised the ire of both local capitalists and the chair of the South African Communist Party, an almost impossible feat. It was exactly what Malema wanted: the attention, the proof that the poor were with him, the refusal to accept anyone’s authority but his own. But then he got clever. He started to think like a lawyer. He went for the delay. At the time, it was tempting. It seemed that the longer the hearing went on, the weaker the prosecution – and by implication, Zuma and Mantashe – would look. For a while, that seemed to be the case. Observers, including myself, began to wonder if perhaps Zuma had miscalculated. But he hasn’t. When you get right down to it, all that matters is how many votes you have in the NEC. The power balance within the ANC does not appear to have moved a jot since Malema was charged.

Without a focal point, Malema is like that little town in Limpopo, Nobody.

This is why he’s taking such a big risk with his series of economic marches. Think of the problems involved. Firstly, what happens if no one pitches up? By no one, we mean around 3,000 people instead of 5,000. Notice how quick he and the League’s leaders have been to point fingers and shout “dirty tricks”. He’s setting the playing field for a situation where just a few hundred people may arrive. He will look powerless, and he’ll be finished.

Then there’s the flipside. What if 10,000 people pitch up? The poorest of the poor – 10,000 people with nothing to lose marching through Saxonwold and Sandton, and then to the seat of government, the home of the man responsible for all their woes. Do you see that ending well? I don’t see how anyone really can. Particularly if past form is any guide. And we know that Malema’s boasts of 1,000 marshals are hollow; he hasn’t been able to organise anything since the League’s conference earlier this year. So if there’s mayhem and chaos, well, he’ll play right back into the hands of Zuma and Mantashe. And the police, mark my words, will be on the lookout for anything to pounce on this week. It could be even worse. The people marching are used to walking. But very few will be able to walk the 61km distance from the Chamber of Mines headquarters in Hollard Street in the Joburg CBD to the Union Buildings in Pretoria. It’s a walk of about 13 hours. And that’s the most direct route using the highways – which the police have so thoughtfully refused permission for the League to use. So there’s also a strong chance that someone could actually get seriously hurt on the route. And we all know who’ll carry the can; Mantashe will make sure of that.

So then why the desperate gamble? It’s clear that Malema has now run out of options. Winnie Madikizela-Mandela was the final witness to testify at his disciplinary hearing. Others who were planning to speak in his defence have opted not to. And to be blunt, if Tony Yengeni won’t speak up for you, you’re really are in a bad way. In the end, the only real people with political heft who’ve spoken in Malema’s favour are Fikile Mbalula, Madikizela-Mandela and Tokyo Sexwale. The first seems unlikely to be secretary-general anytime soon, the second is yesterday’s woman – legend that she is – and the last is the chap who couldn’t drive his 7-series BMW up a muddy hill at Polokwane.

This was emphasised by the fact that Madikizela-Mandela felt the need to speak to awaiting hacks (the two of us that were there) outside the hearing venue. She was the first person who’s testified in this hearing to do that. While it’s proof that the usual rules don’t apply to her, it also shows a certain desire in the Malema camp to get their story out there. And her story comes as no surprise: these charges are similar to the ones brought by Afriforum she says; how do you punish someone for talking about land when “land is what the struggle was really about, it was about land and it is still about land”. For her, as for Malema, this is all about The Struggle, the past, when leaders were radical and revolutionaries wore berets. It also demonstrates how this hearing is crucially important for her. It seems that she has spent a lot of time and energy grooming Malema, he’s been her political project for years. Possibly harking back to the days when she was turfed out of front-line politics. If he goes, is expelled, it will hit her hard. He is, in essence, her final play.

In the final analysis, the best-case scenario for Zuma out of all of this is that Malema goes with a whimper. We all wake up one morning, glance at a statement in our in-box and see Malema has been expelled. Our likely reaction to that? Oh, finally. Oh well, what’s next? It seems Zuma is going to get what he wants. And he’ll give young Malema a lesson on the power of diffusion at the same time. DM