Alex fire remains unlit, no thanks to government

Alex fire remains unlit, no thanks to government 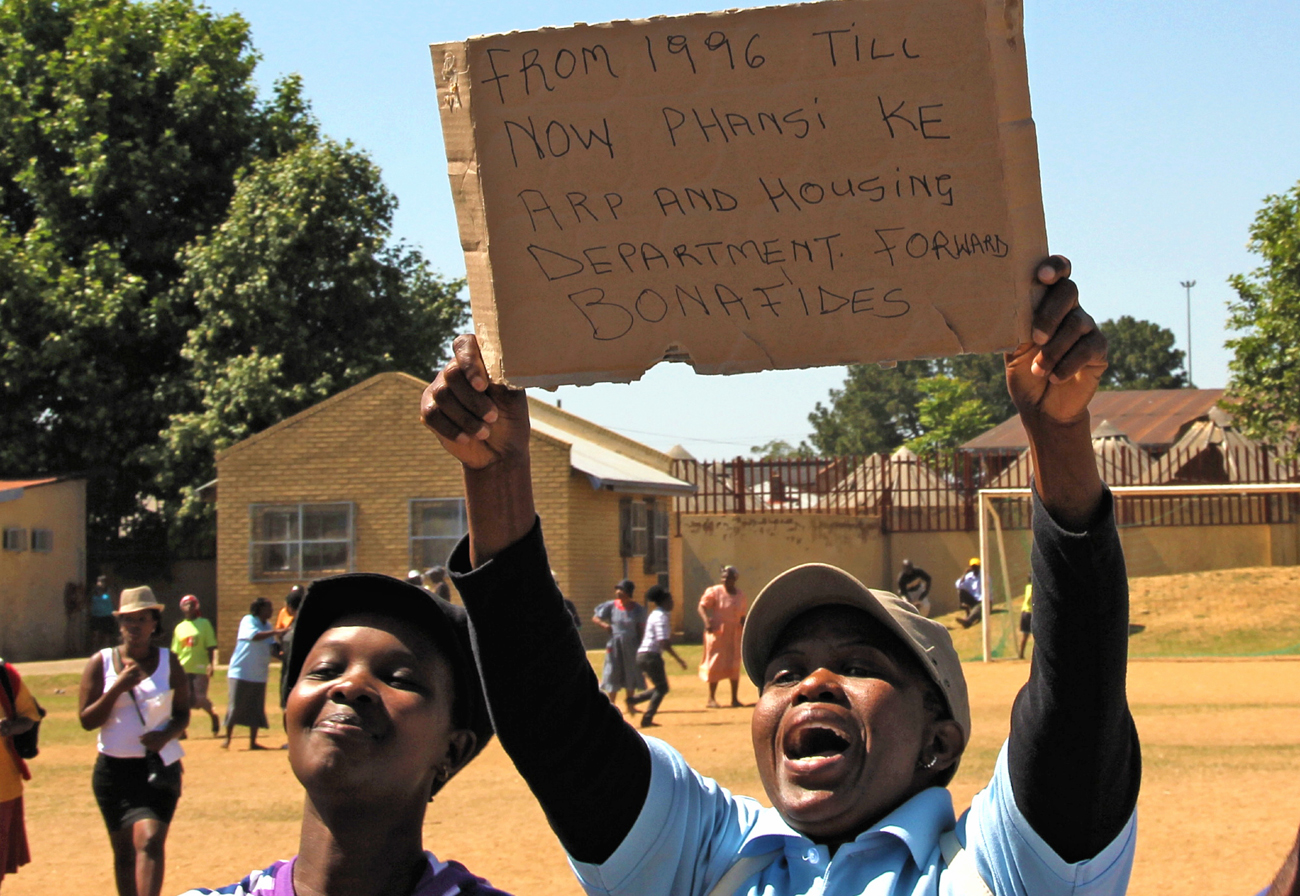 The Alexandra township just outside Sandton avoided a flare-up of xenophobic violence on the weekend, but not by a wide enough margin to make us comfortable that there can't still be a repeat of 2008. Until government ups its game – and starts taking community anger seriously – that threat remains. By PHILLIP DE WET and GREG NICOLSON.

It was a startling display of high-stakes gambling from Gauteng housing MEC Humphrey Mmemezi, bordering on recklessness. On Friday, with less than 24 hours to go before a planned mass meeting of disgruntled Alexandra residents, he called a media briefing. There, with leaders of the new Alex Bonafides organisation sitting next to him, he declared their group irrelevant and powerless, saying it consists of 15 members who had no idea what they were talking about, and would be unable to stir up trouble in the township. It was an approach that denied the organisation any hint of official recognition, but also a great way to push it into showing strength.

Those words nearly came back to haunt him on Saturday, as a significant portion of the 600 people who gathered to hear from the Bonafides pushed for a march to evict foreigners from RDP houses. “No more waiting!” yelled one woman. “We go now, we take what’s ours!” After the Bonafides leaders declined, saying more time was needed to turn to the courts and negotiate with different levels of government first, groups of residents from various extensions split into their own impromptu meetings, where similar – and sometimes more violent – sentiments were repeated. Even within a meeting of the core of Bonafides, there was a push to fight, out on the streets, before momentum was lost. Cooler heads prevailed, but not by much, and only with the promise that more militant action would come in the weeks and months ahead if nothing changed. Had any of these groups turned to forcible evictions, it is not inconceivable that things could have spiralled out of control, with the same kind of contagion seen in 2008 when violent attacks on foreigners started in Alexandra. The threat of arrest, fear of exactly that kind of violence and perhaps also the real progress that has been made in providing housing in Alex prevented that, for now. But a slow burning anger remains – frustration that is seeking an outlet.

It’s difficult to say if Mmemezi’s 15-member quip, and his meeting with a broad set of community organisations (which do not support any kind of action), served to galvanise support or sap it. But while the turnout on Saturday was well below the one thousand people Bonafides had hoped for, it didn’t lack for a representative sample of Alexandra; many women, ranging from the very young to the elderly, joined supporters of just about every political party and several districts within the township to come and complain about the allocation of free housing. Hundreds brought along paperwork that in some cases showed them to have been on waiting lists for a decade and a half. Many told stories of corruption and favouritism, and the vast majority were convinced that foreigners from elsewhere in Africa are living in houses that should rightfully be theirs.

They are right in at least two respects. There is indeed corruption within the bureaucracy of housing allocation; Mmemezi says six of his officials are currently under investigation, with criminal charges laid against two of those. Although he is keen to underplay that, it is likely to be the tip of the iceberg.

And there are indeed foreigners living in the new housing projects in Alexandra, though not necessarily illegally so. In some cases, free houses stand shoulder-to-shoulder with government-owned rental stock, without any way of distinguishing between the two. In other cases, and this is a fairly common problem across the country, the legitimate recipients of free houses rent them out and move back to squatter camps, living off the income their new houses generate. In both cases, those still waiting for houses they firmly believe they are entitled to, tend to not look beyond the fact that government-built houses are occupied by foreigners, while they continue to live in makeshift shanties. Residents of Alexandra line up to copy documents relating to their (unsuccessful) applications for government-supplied houses on Saturday, after a meeting where they were urged to provide Alex Bonafides with proof that they had been passed over. Phillip de Wet.

While that is at the root of the anger many people in Alexandra feel, the complicated system of housing allocation doesn’t help. There are firm criteria that need to be met to qualify for housing, but after that, officials have some leeway to give priority to the most deserving. How long you’ve been on the housing list is a factor, but so does having children, age and physical disability. Those rules have also changed over the years, with the result that corruption is perceived as much more widespread than it could possibly be.

Johannesburg housing chief Dan Bovu, who pitched up at the Bonafides meeting several hours after the start, took a softer line than Mmemezi, but neither has managed to convince everyone that the system works, that things will improve, or that concerns are being taken seriously. And neither seems to be taking particular heed of academic work done after the 2008 xenophobia riots that started in Alex, which found that community leaders seeking power and influence had played a significant role in kicking off the trouble. Bonafides leaders have neither been placated nor arrested on charges of intimidation for serving informal eviction notices on those they believe are occupying RDP homes illegitimately.

Bonafides now plans to gather evidence of corruption in housing allocation, starting with the current inhabitants of RDP houses, and call for the prosecution of officials. Its main play for influence, however, is the creation of its own list of worthy recipients of houses, allowing it to act as an intermediary between the community and government. That and the headache it would bring, Mmemezi has made very clear, he won’t allow. But if that also translates into making the Alexandra community feel they have no influence over the allocation process, service-delivery protests are inevitable. Then the only question is whether such protests would turn violent, and whether foreigners would be at the sharp end. DM