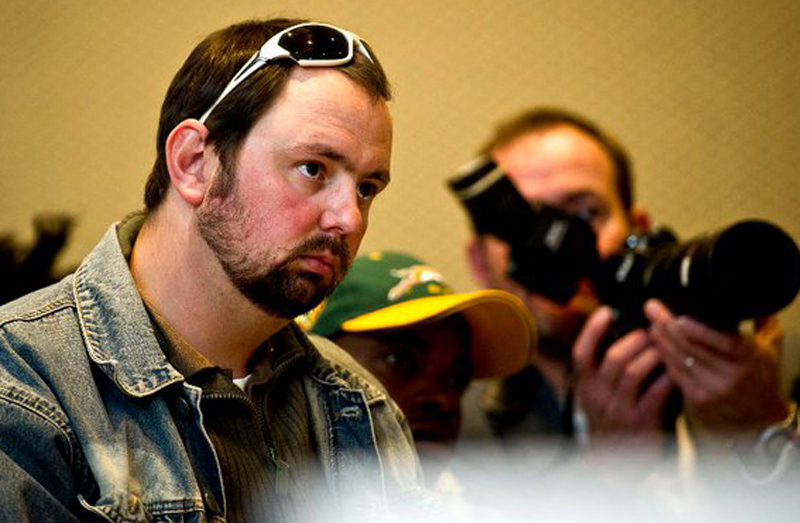 An investigative radio newsman with fire in his belly, Eyewitness News’ Barry Bateman loves his job and he’s really good at it. Much to the chagrin of crooked metro cops and city officials getting rich on corrupt tenders. By MANDY DE WAAL.

“What can we go on record with? Is there going to be an additional cost to the city because of the previous cock up?” Eyewitness News’ Barry Bateman is on the phone to a source about yet another tender graft story involving the City of Tshwane Metropolitan Municipality. In front of him, a computer screen running a ticker of stories from the South African Press Association. Next to that, an imposing microphone plugged into a small mixing desk, and a cascade of papers sliding onto the floor.

There’s the odd child’s toy in between the morning papers in what is the home office that is Eyewitness News’ Pretoria Bureau. In case you’re wondering, the papers he read this morning are Beeld and Pretoria News. The latter is the newspaper where Bateman spent five years uncovering municipal graft before he got noticed by EWN’s Katy Katopodis. After two offers, the last he couldn’t refuse, Bateman became part of the award-winning news team that feeds Talk Radio 702, 567 Cape Talk and 94.7 Highveld Stereo.

“We know there’s corruption in the local municipality, particularly with the issuing of big tenders like this one for the radio network, what we have to do now is prove it,” says Bateman putting down the phone after speaking to the source that was offering him inside information about a tender scam. “I hear that there may be ties between this tender and Jaca who was suspended for other reasons,” says Bateman.

The Eyewitness News journalist has been on the trail of the allegedly corrupt Tshwane metro police deputy chief Ndumiso Jaca for a while now. Bateman’s story about Jaca’s penchant for driving around in luxury vehicles with false number plates (on the deputy police chief’s BMWZ4 and Harley Davidson) not only landed Jaca in trouble, but led to Tshwane metro police management coming under fire because they refused to do anything about their boss, who was breaking the very traffic laws he was supposed to be policing.

Jaca took Bateman’s stories on him as a personal affront and has subsequently snubbed the journalist, refusing to speak to him. But for the EWN reporter, it is all in a day’s work. Like most dogged investigative journalists, Bateman’s job is to uncover the rot, regardless of whether city officials like it or not.

“I do enjoy the investigative stuff, and scratching around,” confesses Bateman. “With the licence plate story, we were given two photographs of vehicles that were owned by the deputy police chief that had identical licence plates,” he says. Jaca sidestepped the issue and didn’t want to respond to Bateman’s questioning, saying the radio newsman was abusing the media to carry out a personal campaign or vendetta. Bateman interviewing a sex worker during a raid at a brothel he’d been investigating. It has since been shut down. Photo: Sizwe Ndingane.

“I eventually found out that the BMW was bought from a scrap dealer. It was basically a code three, written-off vehicle that was never relicensed. I managed to get the license plate from the deal, which clearly showed that the vehicle wasn’t registered and therefore was illegal,” Bateman explains. Jaca tried to divert the story by saying that he had never driven the BMW on a public road, but obviously wasn’t counting on Bateman discovering a 2009 speeding ticket that proved this statement to be a lie.

“The story is important to the public in Pretoria because they are so often pulled over and harassed. I have often got parking tickets at accident scenes when I’ve been investigating a story. But when the man who is supposed to be setting an example, and who is tipped to be the Metro’s police chief, does something illegal, everyone is supposed to look the other way. That is such bullshit,” says Bateman.

The newsman describes Jaca as an arrogant man who worked his way through the ranks as a young superintendent. “He’s incredibly well connected and protected because he has the backing of city politicians, so he’s been largely allowed to do whatever he pleases. When tenders for CCTV cameras were awarded, it was discovered that a company he has links to won the tender. Jaca and I used to get on just fine, and he used to speak to me, but things started souring after the Bees Roux incident.”

Bees Roux, of course, is the Blue Bulls rugby player who was charged with allegedly murdering Metro police officer Sergeant Ntshimane Johannes Mogale in August last year, after Mogale pulled Roux over on suspicion of driving under the influence. Roux walked free after being given a suspended sentence and was ordered to pay Mogale’s widow R750,000. In his argument, Roux said he had defended himself against theft and attempted robbery by Mogale, and pleaded not guilty to the charge of murder.

“Jaca immediately turned the issue into a racial issue, and at Mogale’s memorial service he said didn’t care if Mogale was corrupt. He called on the ancestors to haunt Bees Roux and to exact revenge.” Bateman called the deputy chief for comment and towards the end of the conversation, raised the issue about the false number plates, the BMW and the Harley Davidson.

First Jaca denied having the vehicles, then relented and told Bateman he did in fact own the BMW and Harley. “Jaca said that if I had something personal against him, I should go and speak to him, but he refused to address the issue. That’s the last time he spoke to me. At a later stage, I saw him at Schubart Park just before he was suspended, and I greeted him, but he just ignored me,” says Bateman.

But Bateman’s not that easily thrown off a story. After all, he’s been covering the Tshwane beat since 2005 and knows what’s happening in the city’s underbelly. “There’s loads of corruption going on in Tshwane, anything from tenderpreneurs who have no experience and are awarded tenders, or officials on the inside who influence bid adjudication and get cuts or are paid by people who are in the companies that are awarded these tenders. Then of course there are senior officials like Jaca who have ties to companies that get tenders,” Bateman says.

“It is difficult to get to the truth because nobody wants to talk, but there is a significant SIU (Special Investigating Unit) investigation that is underway and which will be concluded by the end of the year. Hopefully there’ll be arrests and criminal matters because we’ve been writing about corruption here since the days of Gwen Ramokgopa. But our corruption stories were always dismissed as lies,” says Bateman. Ramokgopa is now South Africa’s deputy health minister, after being executive mayor of Tshwane City from 2006 to 2010.

A man with a strong, confident voice, Bateman covers a generalist beat in Pretoria, which sees him moving from presidential pressers (press junkets) to accident scenes, brothels, Cabinet briefings, universities and investigating water problems. “It’s very general but I am very much guided by what’s in the public interest,” he says, explaining that people pay their taxes and want to know how well, or badly, their interests are being represented.

Bateman always wanted to be a journalist. His father read The Star religiously and that’s where he first discovered his love of news. But there weren’t major news opportunities in Witbank, the small Mpumalanga mining town that Bateman grew up in. The newsman quite openly admits to having a small town, more conservative outlook, but says that in his teens, something called the internet changed all that.

“I finished school in Witbank in ’97 and did a crappy course at Damelin and got a crappy job fixing computers. In my twenties, I avidly read the news and started a website commenting on news issues that nobody read, and would write letters to The Star,” says Bateman. “Growing up in Witbank, there is a different type of thinking. It’s small-town thinking. But I was lucky in that in my teens, I was exposed to an international internet forum called Flipside that was populated mostly by leftists from the US and UK, and that’s where I developed an appetite for debate and got an international perspective on news and issues.”

Tired of his job, hungry to break into news, Bateman appealed to his parents to give him a second chance. They did and he enrolled to study journalism at the Tshwane University of Technology in 2003 at the age of 24. “I was very serious and purposeful about my studies because all I ever wanted to be was a journalist.”

Bateman won TUT’s top journalism prize for students, and got an in at Pretoria News after taking photographs of a plane crash at Wonderboom Airforce Base, which he gave to the paper. The rest, as they say, is history. Today, Bateman is busting bad cops from his home office, where the bookshelf behind him is filled with volumes on journalism, atheism, rationalism and of course that local reporter’s staple, “The Bang Bang Club” by Greg Marinovich and Joao Silva.

Perhaps it is fitting that people like Jaca don’t like Bateman. They shouldn’t because when it comes to ferreting out news about rot and malfeasance, Bateman’s a bit of a pit bull. He doesn’t let go until the truth shows itself. DM