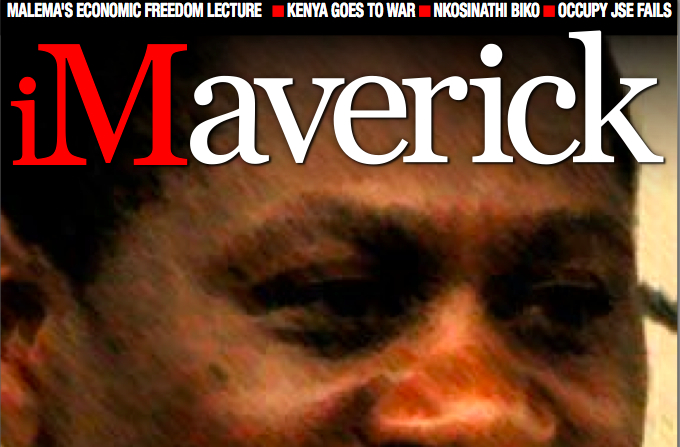 Paul Mashatile: ready to roll the dice; Malema's economic freedom lecture; Kenya goes to war against al-Shabaab; Nkosinathi Biko on race and reconciliation; and the failure of Occupy JSE.

CELE WAITS FOR ZUMA TO RESPOND TO HIS RESPONSE

Police chief General Bheki Cele is not on his way out, yet, as President Jacob Zuma is, as usual, taking his time to read and consider Cele’s response over why he shouldn’t be sacked. But if he goes, the DA doesn’t want him to go far. CARIEN DU PLESSIS reports.

While President Jacob Zuma is still trying to get through some of his reading, among others a response on why he shouldn’t sack his police chief, DA leader Helen Zille spent her Sunday writing him a letter to ask for a probe into the “informal” hacking of phones by South African intelligence agencies. CARIEN DU PLESSIS reports.

MASHATILE: READY TO ROLL THE DICE

Towards the end of December 2009 we said that Gauteng ANC leader Paul Mashatile was sinking, fast – that his ship had been capsized by the Zuma Tsunami and that he would continue to take on water. We, well, me really, were wrong. He has manned the pumps, got rid of the excess water and is now steaming ahead. It’s a fascinating case study in the problems of governing the country while being head of the ANC, and of what you can do in ANC politics when you put your mind to it. By STEPHEN GROOTES.

ANC PUSHES ON WITH MALEMA HEARING, ALL IN GOOD TIME FOR THE YOUTH LEAGUE

ANC Youth League leader Julius Malema has the ANC exactly where he wants it, with the grand finale of his disciplinary hearing timed to coincide with his organisation’s muscle-flexing protests for economic freedom for youngsters. Still, the ANC is soldiering on. CARIEN DU PLESSIS reports.

MADONSELA’S RIVETING REPORT: SHICEKA WASTED OUR MONEY ON LUXURY. AND HE LIED.

The Public Protector’s report on Minister Sicelo Shiceka’s creative use of public funds revealed his R13,000 mosquito-fighting habit and a misguided lifeline from Public Works Minister Gwen Mahlangu- Nkabinde, by now a regular sideshow in Madonsela’s reports. CARIEN DU PLESSIS found the reading riveting – like going down a rabbit hole.

Announced publicly on Friday morning and supposedly cancelled a few hours later, ANC Youth League president Julius Malema’s “Economic Freedom Lecture” at Wits University went ahead anyway despite the vice chancellor’s office having told the organisers to cancel or postpone the event. Such was the turnout that Malema had to deliver back-to-back lectures to two halls of eager young fans. By OSIAME MOLEFE.

GLOBAL OCCUPY MOVEMENT ARRIVES AT JSE – EVER SO BRIEFLY

The Occupy JSE protest on Saturday proved only that the white middle class in SA has no stomach (or, possibly, no reason) for protest, and that black activists have more immediate concerns than aping a global trend. There’ll be mass demonstrations in South Africa, all right, and soon, but they’ll be in the home-grown mould and centred around local issues. BY OSIAME MOLEFE and PHILLIP DE WET.

The simplest way to look at any incident in South Africa is to apply stereotypes; but when we revert to type like this, the resulting divide is always racially polarised. Steve Biko Foundation’s Nkosinathi Biko sees race as an overpowering part of who and what we are, and laments over our failure to create an identity based on the respect of diversity. By MANDY DE WAAL.

On Saturday, I went to see the Occupy JSE protest and left with a distinct sense of confusion. Reading up on the people who started the local incarnation of the Occupy Wall Street protests didn’t help either. I’ve got a few things that I’d like cleared up.

In an unusual role reversal, the roads around Harare became a danger zone for male hitchhikers. A gang of female rapists has been roaming the lonely roads, grabbing men, drugging and raping them to harvest their lucrative semen. But police have arrested suspects and say the roads are safe for men again. By SIMON ALLISON.

HISTORY REPEATS ITSELF AS EGYPT’S MILITARY TIGHTENS ITS GRIP

Egypt’s military promised to handle the transition from Mubarak’s regime to Egypt’s bright new future of democratic, civilian rule. But revolutionaries are beginning to wonder if the military will ever let the transition end. By SIMON ALLISON.

KENYA GOES TO WAR AGAINST AL-SHABAAB

Kenyan troops and aircraft crossed the border into Somalia on Sunday afternoon on the hunt for al-Shabaab militants who are behind a recent spate of kidnappings on Kenyan soil. Al-Shabaab’s cross-border raids have angered and frightened Kenya, which can’t afford any more knocks to its fragile economy, and the country is responding with an unprecedented show of force. By SIMON ALLISON.

US TROOPS HUNT AL QAEDA IN AFRICA, NOT THE LRA

Obama has authorised combat-ready troops to take on Joseph Kony and the Lord’s Resistance Army, a first for the US military since the debacle of “Blackhawk Down” in Somalia. But Kony’s just a pretext for targeting the terrorists the US is really worried about – al Qaeda in Africa. By SIMON ALLISON.

Laura Polla?n Toledo, one of Cuba’s most active dissidents, has died in hospital aged 63. Polla?n was the founder of Cuba’s “Ladies in White” activist group, a thorn in the side of Castro’s government for the past eight years. By REBECCA DAVIS.

QUEEN ON SWANSONG TOUR TO AUSTRALIA

The Queen is on her way to Australia this week, for what is taken as her final tour to the country. Once upon a time, her visit would have guaranteed republican protests – but these days anti-monarchical fervour in Australia has lost its support. By REBECCA DAVIS.

Despite a sense that America’s national mood is one of pessimism about national drift – or worse – the most recent polls indicate Barack Obama remains ahead of his potential Republican rivals. While this is still early days, the Republican primaries and caucuses have yet had their first votes cast – regardless, new polls together with some recent speeches gives insights about how the national campaign will be fought, and where Obama will try to open the gap further between himself and his erstwhile Republican challengers. By J BROOKS SPECTOR.

New York bankers dismiss the Occupy Wall Street protests as the doings of out-of-work hippies. But on 15 October, as the campaign spread to 951 cities in 82 countries, the moneyed “1%” may be watching their flat-screen TVs in silent panic. As protests turned violent in Rome, a global manifesto endorsed by the likes of Noam Chomsky is lending the movement some long-awaited coherence. By KEVIN BLOOM.

Having been assured that Google+ has indeed taken off, Google will now close Buzz, a previous attempt at a social network that didn’t go so well. By SIPHO HLONGWANE.

If Standard Bank wants to continue growing, it needs to wean itself off South Africa, where growth is slowing. Thus said Standard Bank CEO Jacko Maree. Not a bad strategy, given that Nigeria is projected to be a bigger economy than South Africa in 2025. By SIPHO HLONGWANE.

On Friday, the Competition Tribunal disallowed a proposed merger between the US-based Pioneer Hi-Bred International with Pannar Seed of South Africa. The merger would reduce the number of maize suppliers in the country, the commission said, and thus the prospects of maize prices going up were increased. By SIPHO HLONGWANE.

In what may be the first major natural resources buy for a Chinese parastatal in North America, Sinopec is buying Canadian oil and gas explorer Daylight Energy Ltd. This could herald the arrival of the Chinese in the North American commodities market in a big way. By RICHARD POPLAK.

Not one to sit on its hands while others slaughter its market dominance, Research in Motion has brought out a replacement for the Blackberry Bold 2: the thinner, wider and altogether prettier Blackberry Bold 9900. Are we charmed? Well, yes. By SIPHO HLONGWANE.

Until now, it had been widely assumed that 19th century dutch painter Vincent van Gogh had killed himself, owing to psychological problems. A new biography blows that theory out of the water, and suggests someone else may have fired the fatal shot. By THERESA MALLINSON.

The Proteas were pretty much dead and buried headed into the final five overs of Sunday’s second Twenty20 International, until Wayne Parnell and Rusty Theron pulled off a remarkable partnership to undo Australia’s inexperienced attack at the Wanderers. By JONHENRY WILSON for Cricket365.com.

Andy Murray’s amazing run in Asia continued on Sunday as he claimed his third successive title by defeating David Ferrer in the Shanghai Masters final.

ONCE WERE WARRIORS: THE FUTURE OF TEST CRICKET IN SOUTH AFRICA

Cricket South Africa recently pleaded for understanding from the media and their support. PAUL BERKOWITZ is also finished with his voodoo doll collection of these useless nogschleppers. Read on to find out how they’re killing Test cricket in South Africa.

ALL BLACKS BUNDLE AUSTRALIA OUT OF RWC

In a highly physical encounter that saw several New Zealanders spilling blood for their cause, the All Blacks marched imperiously into their third World Cup final after a 20-6 triumph in Auckland. By STYLI CHARALAMBOUS.

When Tonga beat this French team in the final group match of Pool A, few would have believed that the Tricolours would make it much further in the tournament, let alone their third RWC final. STYLI CHARALAMBOUS reviews the drama of the first semi-final at Eden Park, Auckland.

KJ Choi says the fire is still burning strong in his belly as he seeks an elusive first Major title. By GOLF365.COM.