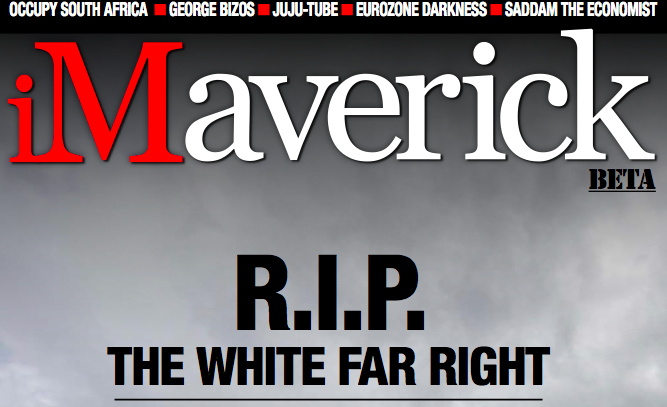 Turns out that normal anti-competition rules don’t apply if you sell something considered absolutely vital to the survival of the nations. That’s what we’re gleaning anyway from the Competition Commission’s decision to grant the petroleum industry certain exemptions from the Competitions Act. By SIPHO HLONGWANE.

PARLIAMENT AND JOURNALISTS FAIL TO MEET OVER THREATS

Relations between Parliament’s press office and journalists aren’t getting any better following a threat to bar a journalist from the institution. Now a meeting planned for Tuesday was cancelled in a huff. CARIEN DU PLESSIS reports.

JUJUTUBE FOR ECONOMIC FREEDOM IN OUR LIFETIME

The ANC Youth League has made a video clip of its leader, Julius Malema, issuing a “clarion call to economic freedom fighters” to attend its marches at the end of the month, and posted it on YouTube. CARIEN DU PLESSIS figures this must be the plan B clarion call in case the motor mouth gets suspended – or if his health hospitalises him again.

As recently as April last year we’d have rated the extreme right, led by the AWB, as a potentially destabilising force in South Africa. Mortally wounded though the various movements were, they still seemed more than capable of causing havoc. But the Eugene Terre’Blanche trial is providing the formal confirmation: organised white extremism is dead. Unless you think the likes of AfriForum can be radicalised. By PHILLIP DE WET.

THE ELDERS ARE RESTLESS, BIZOS SHOWS JUST HOW MUCH

There’s something of a tradition of South African leaders giving their more frank interviews to foreign news organisations. Mbeki used to do it often. President Jacob Zuma, thankfully, turns down some of the international agencies. But it turns out the tradition is alive and well. Last week Channel Four aired an interview with Planning Minister Trevor Manuel in which he said he felt Julius Malema did have a burden to be transparent about his finances. Then, on Tuesday, the BBC’s Hardtalk featured a discussion with George Bizos. Yes, that George Bizos. In the interview, he showed that he is worried about how things are going. And it seems he’s not alone. By STEPHEN GROOTES.http://local.dailymaverick.co.za/admin/homeconcept

Today I put myself “at the forefront of organised, peaceful and legal resistance” – I became part of something called Operation Ubuntu, which is celebrating “World Revolution Day” on Saturday by occupying the street outside the JSE and a garden outside Parliament.

STYLI CHARALAMBOUS: WHERE TO NOW, BOKKE?

Now that the tears of despair from Sunday’s colossal fiasco of a rugby match have somewhat dried, I’m forcing myself to momentarily break away from the wallowing to peek into South Africa’s rugby future. And I like what I see.

She didn’t resist, she deserved it and she needed to be taught a lesson: this is the essence of the Nigerian police response to the brutal, video-recorded gang rape that shocked the nation. By SIMON ALLISON.

UK Prime Minister David Cameron has pledged to reduce funding to African countries which continue to persecute homosexuals. Countries with poor gay rights records are likely to see millions slashed from their aid cheques in “funding fines”. By REBECCA DAVIS.

CIVILIANS PAY THE PRICE AS THE BATTLE FOR SIRTE GOES ON

Libya’s rebel commanders claim they now control 80% of Sirte and they are confident that a victory in Muammar Gaddafi’s home town is just a few days away. In the meanwhile, civilians have borne the brunt of this protracted battle. By KHADIJA PATEL.

As Liberians went to the polls on Tuesday, they did so with not just the hopes of a nation on their long-suffering backs, but those of a continent. With Africa still too often characterised by shoddy leadership, stunted development and a repressive political system, Liberia represents the hope for the future. By SIMON ALLISON.

RELEASE FOR 6,300 BURMESE INMATES, BUT NOT TOO MANY POLITICAL PRISONERS LIKELY TO BE FREED

The Burmese government has said it will free thousands of Burmese inmates on Wednesday. But, going by past experience, only a select few of these will be political prisoners – and leading pro-democracy activists won’t be among them. By THERESA MALLINSON.

From Arab Springs to Slutwalks, 2011 seems destined to be the year history will remember for major social upheavals, pop-up protests and cellphone-fuelled riots and revolution. Yes, blood has been spilt. Yes, lives and livelihoods have been lost. But governments have also toppled and the very assumptions on which our world had come to rely have been irreparably shaken. In the words of a score of pop songs: Where do we go from here? By WALTER PIKE.

AFTER REJECTION ON SYRIA, EUROPEANS PRESS FOR RESOLUTION ON YEMEN

The Nato members of the UN Security Council have not been deterred by the rejection of their proposed resolution on Syria. On Tuesday they proposed a draft resolution calling for Yemeni President Ali Abdullah Saleh to step down. By KHADIJA PATEL.

Hindsight is 20/20. Foresight, on the other hand, is as rare as it is overblown. The old joke – “the older I get, the better I used to play soccer” – now has a geopolitical equivalent: A recent Vanity Fair posting has credited Saddam Hussein with powers of financial clairvoyance. Here’s why. by RICHARD POPLAK.

EUROZONE: AIN’T NO SUNSHINE ANYMORE – AND IT WON’T BE THERE ANY TIME SOON

A bit like one of those cartoons where Roadrunner or Wily E Coyote pauses suspended in mid-air for a few seconds before gravity reasserts its dominance, at least for a day or two the world seems to be in pause mode over the eurozone financial crisis before hurtling forward again – over the precipice and to the canyon floor or onward to a rocky but safe landing. By J BROOKS SPECTOR.

CAN YOU FEEL THAT EVER-SINKING BLACKBERRY FEELING?

After two successive days of either broken or sluggish BlackBerry Internet Service across three continents, have Research In Motion finally made the blunder that will cost them their last remaining powerful asset: user loyalty? By SIPHO HLONGWANE.

Was Steve Jobs’s death hastened by a belief in alternative medicines? A report in Fortune from 2008 suggests Jobs delayed treatment for his cancer at a time when he could ill afford it. By REBECCA DAVIS.

New Zealand suffered its worst environmental disaster early this week after a cargo ship began leaking copious amounts of oil following a storm. The ship apparently crashed into a charted reef during calm weather six days ago, and was later damaged during a storm, spilling tonnes of oil into the sea. By SIPHO HLONGWANE.

Stories of the yeti, an ape-like beast said to stalk the snowy mountains of Asia, have been around for centuries. A yeti conference held in Siberia last weekend now claims they have found “irrefutable evidence” of its existence. By REBECCA DAVIS.

Much to the chagrin of politicians on both sides of the political spectrum, the campaign to Occupy Wall Street is gaining momentum by the day. The weekend saw the appearance at Manhattan’s Zuccotti Park of one of the world’s most famous philosophers, and with long think-pieces now appearing in sober mainstream newspapers across the nation, the movement looks set to kick up yet another gear. By KEVIN BLOOM.

Manchester United defender Patrice Evra has called on his team to work together to boost their defence ahead of the trip to Anfield. By FOOTBALL365.com.

Andy Murray has backtracked on suggestions that their overcrowded schedule could lead to a strike by the top players in men’s tennis.

PROTEAS BACK IN THE SADDLE

For the Proteas, Monday might have felt like the first day back at school as they convened for the first time ahead of a big summer. Old friends were reunited, fresh young faces joined the mix and stories were no doubt exchanged. By CRICKET365.COM.

Australia’s rugby coach Robbie Deans backed mercurial Wallabies’ playmaker Quade Cooper to be at his best in this weekend’s all-or-nothing World Cup semifinal against the All Blacks. By PLANETRUGBY.COM.

PONTING OFFERS TO DROP TO FOUR

Ricky Ponting has insisted that he is happy to move down to four in the Test batting order on a permanent basis as Australia look to accommodate Shaun Marsh at number three. By CRICKET365.COM.