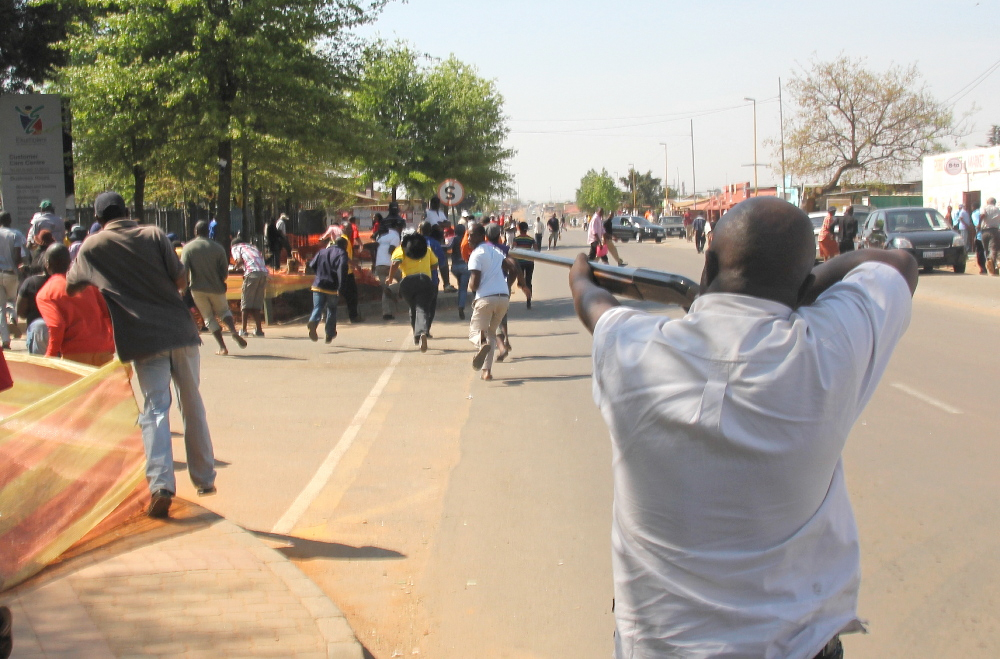 Three very different but equally volatile communities in Gauteng are fighting for what they consider their basic rights: electricity, cheaper electricity, or just a place to live. All three have mobilised – eventually violently so – but none have achieved their purpose. Now each is wishing on a star they think will rise from the Free State next year. By PHILLIP DE WET.

The night the residents of the Schubart Park high-rise slum in Pretoria were marched out of the buildings they used to call home, they were angry but confident. “Don’t worry, we’ll sort them out in the courts,” one man said, in between fruitless phone calls to try to locate his wife. “They’ve tried to do this before, but the court won’t let them. When the High Court in Pretoria turned down an application to force the return of the residents, he was still angry but confident. “We’re taking them to the Constitutional Court. This is unconstitutional. They’ll sort it out.” Last week the Constitutional Court declined to hear the matter. The man, now living out of a car he parks in a different part of Pretoria each night, no longer has much faith in the courts. “They [Lawyers for Human Rights] say they will take it to the Supreme Court of Appeal. Do you know how long that is going to take? I don’t have time for that. We’ll have to take this fight to where they live.” He declined to elaborate.

In Themb’elihle, a squatter camp on the outskirts of Lenasia, residents called for President Jacob Zuma to come visit them so he could intervene. A small minority said they’d rather have ANC Youth League chief Julius Malema; either way, they expected a miracle, some kind of inexorable political force, to bring electricity connections to their homes. They got neither a national leader nor the electricity. Instead, some of their own leaders and several protesters were arrested during violent demonstrations. On the weekend, rumour had it that different groups were either making petrol bombs or collecting money to fund such endeavours, though that could not be confirmed. “We’re telling people to stay calm,” a young leader said. “They say we haven’t done anything, nobody is doing anything. Now they want to make war.”

When Ekurhuleni mayor Mondli Gungubele met a group of residents in Tembisa last week, they took that as a good sign. Widespread violent protests on two separate days had attracted his attention, they said, and he was coming to make concessions. They would get their wish electricity bought directly from Eskom at the lower rate than their metro’s resale price. After Gungubele offered nothing but future talks and strongly implied that the city needs the profits from electricity sales, residents stormed out of the hall, bringing the meeting to a halt. As one group of community leaders was speculating about whether the Public Protector would pick up their cause (and deciding that, on balance, she probably wouldn’t), various small knots of people discussed which city-owned building should be torched first, or more deadly options. All four of the groups we spoke to had nothing but derision for the idea of negotiations or turning to a different arm of the state. So what would extreme violence achieve? “I don’t know,” said a young man bluntly. “Maybe something will change.”

But in all three cases, life has largely returned to normal after clashes with police and you have to go in search of the ominous omens. On the surface, things are calm.

All three communities, small, medium and extra large, have been restive for many years, and violent protests have only broken out occasionally, sometimes apparently because resentment had reached critical mass, at other times because a new group of leaders was making a play for political power. Over the years they have come to exhaust all the legal and democratic means available to them, or all they consider available, at least: marches, letters to Parliament, court bids, appeals, memoranda to local government, ultimatums, threats, violence against local councillors. Their paths have been as different as their problems. But the reasons they have continued to hope for a better life, over the years, are almost identical. Local government elections, national government elections, the soccer world cup (or, rather, the economic boost it would bring). As each of these events went past with no change, another appeared on the horizon. Now all three are focusing on the ANC’s Mangaung conference next year as saviour.

The scattered residents of Schubart Park, the people of Themb’elihle and Tembisa, all say things will change after the ANC elects, or re-elects, top leaders. Some community leaders will, unprompted, launch into the reasons why that is, some of the residents need leading questions, but once the topic is broached an overwhelming majority agree that the ANC is just a little preoccupied with its own struggle right now, and that things will change in 2013. Maybe 2014, at the latest. Things may be a tough until then, but the voice of the people will be heard and the services will flow. It’s just a matter of hanging in until then.

While the happy ending is always the same, the fantasy scenarios leading up to that vary wildly. Jacob Zuma will win. Kgalema Motlanthe will win. Thabo Mbeki will stage a comeback. The details, you see, are irrelevant. The good guys will take over, or get rid of the deadwood, and get down to the business of governance. “Governance”, in this case, meaning giving voters exactly what they want, because that’s apparently how democracy is supposed to work.

The clear underlying assumption is that a failure in service delivery is simply a failure of political will, and that sufficient resources are ready and waiting to be deployed. The man at the top just needs to press the right button.

So what happens when those sadly naive hopes are dashed? Because that much is inevitable. Schubart Park is unliveable, and Tshwane can’t house all its former occupants. If Themb’elihle is further developed at all, which is doubtful, it will only be once big parts of the community is removed because the ground under their homes is prone to developing sinkholes. The price of electricity will increase faster than social grants and wages do in Tembisa for the foreseeable future, and rates and taxes will remain unaffordable.

Surely even the mostly hopelessly optimistic member of each community must realise that. And perhaps they do. For now that hope is keeping them off the streets and preventing more violent protests and riots. That doesn’t mean they aren’t preparing for democracy by other means. DM