A day in the life of the Pan-African Parliament 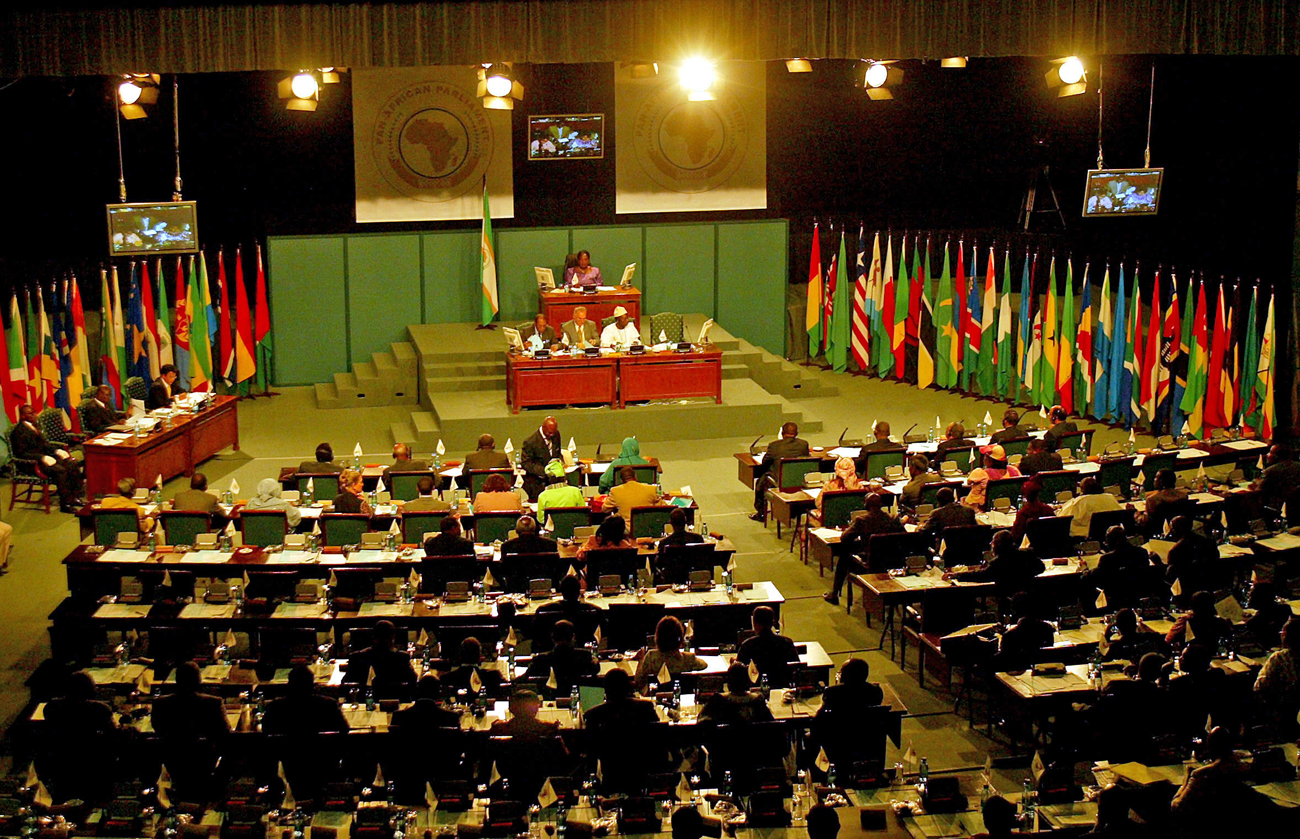 A day at the Pan-African Parliament was supposed to tell me everything I needed to know about the African Union’s perspective on all the continent’s political hotspots. Instead, I saw plenty of pomp and ceremony and some very fine traditional outfits, but no sign of any substance. By SIMON ALLISON.

The home of the Pan-African Parliament is enough to fill one with hope for the future of our continent. Situated in the grounds of the Gallagher Estate, it’s a swish, purpose-built hall that seats thousands in plush padded chairs. The rising concentric semi-circle seating arrangement, the built-in microphones at each parliamentarian’s place, the row of glass translator boxes at the back and the and tidy line of flags in the front all speak to the romance of international diplomacy. Here, one imagines, is where Africa’s future is determined.

Not quite. The Pan-African Parliament (or PAP, as it is commonly referred to, making all the proceedings sound to the unfamiliar South African ear like a bizarre advert for maize meal), is only seven years old, and only meets a couple of times a year. For the most part, the fancy hall stands empty. And even when it is full, the parliament’s actual purpose remains somewhat mysterious. Although the glossy leaflets being handed out promised all kinds of important functions, they were filled with ultimately meaningly buzzwords that only serve to emphasise their lack of real responsibility and real power: PAP will “facilitate” policy implementation; “promote” human rights; “encourage” good governance; “strengthen” continental solidarity; etc. Do they actually vote on anything? I’m still not sure.

And the day’s proceedings – Day Three of the Fifth Ordinary Session – were similarly vacuous. The morning was supposed to address almost all of Africa’s pressing security issues: Cote D’Ivoire, Egypt, Libya, Sudan, Tunisia. Thabo Mbeki, the African Union’s man in Sudan, was scheduled to open the discussion with a report on what’s going on in the now divided country. He didn’t pitch. The report on Libya and Tunisia could not be presented thanks to “technical difficulties” which weren’t elaborated upon, and instead was delayed to later this week. And the report on Egypt didn’t actually exist; a fact-finding mission was still waiting for approval from the Egyptian government before it departed. Africa’s parliamentarians will just have to wait until next year before they get any report on what’s going on there.

The report on Cote D’Ivoire was a little more interesting, but strangely upbeat. The head of the fact-finding team, Ghana’s Ambrose Dery, said that all sides of the dispute were optimistic about the future, and that Ouattara was doing a decent job of reforming the security services. He did pointedly remark that Ouattara was still ruling by decree, ignoring the National Assembly; this was also Gbagbo’s preferred leadership method. No mention, however, of the extrajudicial killings which international rights groups have been reporting on, where Ouattara-aligned forces have been taking out their enemies. This subject might just be a little sensitive for this particular body.

So no surprises then. PAP is towing the AU line as far as Africa’s conflict areas are concerned, and its reports added no new information. Not that the body really has the mandate or the legitimacy to change the AU’s course; as parliamentarians are appointed by their home legislatures rather than elected directly, PAP will always be a rubber-stamping organisation rather than a source of genuine political inspiration.

As the honourable representative from Botswana sagely observed: “I can’t think of a parliamentarian who seized power in a coup d’etat or something similar. Africa’s problems are with their leaders, not their parliaments.” Too true – and that’s why the real power in the African Union lies with the country’s leaders, and not its half-hearted attempt at a representative governing body. DM