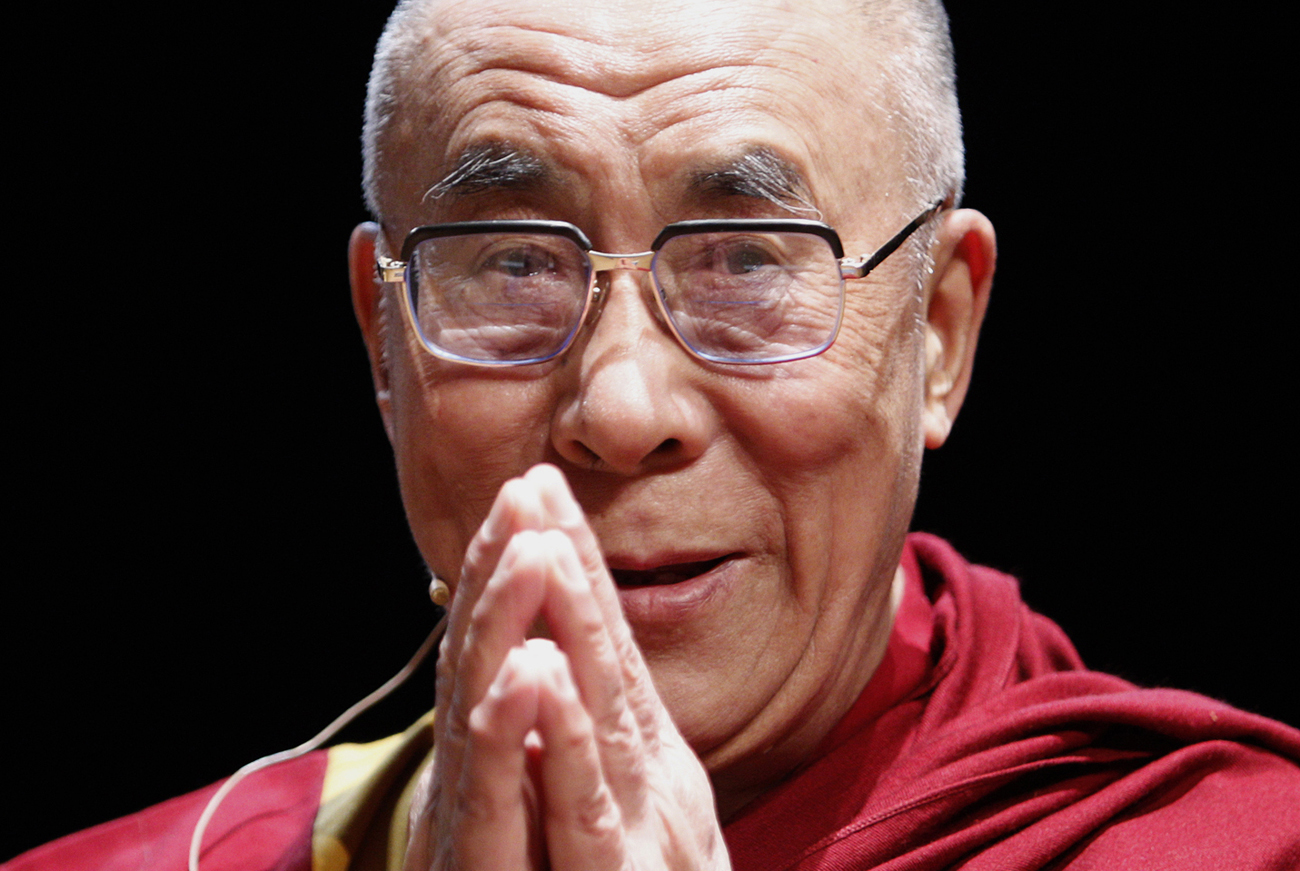 Once again, the His Holiness the Dalai Lama has the South African doors slammed shut in his face. This time, there is nowhere for the government to hide. By RICHARD POPLAK.

“I know how men in exile feed on dreams.” The quote is attributed to Aeschylus, the Greek dramatist who is described as the father of tragedy. It’s a line I have had the occasion to contemplate often over the years, because while it feels emotionally true, it is not precisely factual. Not every exile is analogous; not all exiles react to their banishing in the same way. And this we can never forget: Every exile’s dream is the nightmare of the regime that sent him into the wilderness in the first place.

But what strikes me most forcibly about the quote is the prevailing question of its unwritten sequel: What happens to the dream when the exile is over? In other words, what do those 40 years in the desert teach the exile, and how is that knowledge used when he is permitted to return home?

These questions have once again bubbled to the surface over the course of this week, as the pageant of His Holiness the Dalai Lama’s visa application process unfolded in the wings of some impenetrable Home Affairs/Dirco backroom, reaching a conclusion as sad as it was inevitable. Stripped down to essentials, this was a case of a cadre of men and women, once exiled to far off lands or a windswept island within view of home, refusing the opportunity to welcome someone who currently shares the very plight that defined them. It is the final, bitter victory of real politick over ideals, the fizzling out of a dream once dreamed in exile, the emphatic full stop on any notions of South African exceptionalism.

First, some housekeeping: The South African government owes nothing to the Dalai Lama. Their obligations are to their constituents; to upholding the rule of law; to fair and due process; to keeping the machine ticking over smoothly. To that end, Deputy President Kgalema Motlanthe returned from China yesterday, having engaged in a bout of handshaking with his counterpart and soon-to-be-new-leader Xi Jianping, which will lead to, among other things, more favourable landing rights for SAA flights to Beijing. According to China’s official news agency Xinhua, China’s vice president, Xi Jinping, who was Mr. Motlanthe’s host, thanked South Africa for its “valuable support” on Tibet.

The South African street, stoked by local pundits, has a knee-jerk response to our increasing friendship with the Chinese: Inyenzi; Colonialists. Indeed, there is much we currently misunderstand about the relationship, not least of which is the fact that they are the only game in town, mostly because Western economies are currently undergoing something of an extended implosion. We need the Chinese, and they need us.

But the relationship has unfolded in secret, in a cloud of obfuscatory Cohiba smoke that leaves everyday South Africans on the sidelines, wondering what is being mortgaged away for all the Memorandums of Understanding in the Field of Minerals and Geology. What have we ceded to the Chinese in order to make them our biggest trading partner, other then the fair exchange of resources for cash? What have we given up?

Today, many South Africans would insist upon the following answer:

The Dalai Lama, a cynic would note, is a cause célèbre for whom the average South African may offer up a shrug and a “what’s he done for me lately?” He was, however, invited here to celebrate the 80th birthday of one of our Nobel Laureates, Desmond Tutu. The shindig itself should be recognition for everything the Archbishop has battled for in his long life, up to and including the right to assemble a guest list for such a milestone. In other words, Tutu’s party is a celebration of freedom, one that has been significantly undercut by his government’s non-decision on the Dalai Lama’s visa.

Now, the Archbishop fulminates that the current government makes apartheid look good, which is nothing more than the sophistry of a wily old headline seeker. But we have learned something very important about our government over the past few days. In refusing to take a stand on this issue, in throwing Tutu’s expressed wishes under the bus, and in turning its collective back on a man who related so closely with Madiba and the spirit of the struggle, they have effectively ended an era. The ANC is no longer a liberation movement, but warden of a state in which ice-cold pragmatism rules the day. We have known this for a while, perhaps, but sometimes it takes a symbol to make things clear. This is, of course, the third time the Dalai Lama has been unable to secure free passage, so we can now be utterly certain that this historical friendship has been discarded. And if the ruling cadre is so quick to dispose of history, we must wonder how many historical truths have been discarded as well.

We have also learned something about the Chinese, namely that their lofty adherence to the principles of non-involvement in the sovereign affairs of its allies is a smokescreen, a blind that allows them to deal with devils and impose their will, however benign or malignant, behind closed doors. As the South African delegation’s unfinished plates of spicy chicken balls are cleared away, Xi Jianping prepares for a Canadian contingent, who will also be shilling commodities and looking for better landing rights in BCIA. Not two weeks ago, the Dalai Lama attended a conference in Montreal, a news item so insignificant that it didn’t warrant so much as a column inch in that country.

Yes, China has effectively quieted Western criticism of its human rights record, and it has shut down any meaningful opposition to its occupation of Tibet. But China would never dare to pressure a member of the G8, in this case Canada, on how to conduct its visa granting process. There is no clear evidence that China forced South Africa to refuse the Dalai Lama a visa, but if data is the plural of anecdote, the anecdotes from insiders are certainly piling up, amounting to a powerful indictment of Sino-South African diplomatic relations. Ultimately, the South African government didn’t have the spine to outright refuse the Dalai Lama an entry visa. They merely obstructed, delayed, and issued pronouncements that Orwell himself could have written, assuming he had a free half hour and a thesaurus handy.

The only meaningful interpretation of this turn of events – this new geopolitical reality – is that China exerts a far greater influence over the wealthiest and most powerful country in Africa than it does over its Western counterparts. China’s apologists have long claimed that the Chinese relationship with Africa is not special, but rather fair and expedient. They are wrong. There is the pull of paternalism, the distinct sound of daddy yanking his belt from his britches, every time we step out of line. If we are not free to open our doors to our old friends, how free are we in matters of policy? Are we members of a bloc, junior partners in a game in which we are punching well above our weight? If so, it behooves a democracy to deal with such things in the open. The lack of transparency is a powerful suggestion that the government cannot, should not, be trusted.

Which brings us back to the matter of our soul – our collective mettle as a country. In the last 20 years, what have we become? This is a question that should be asked every day in a new democracy – vigilance is the price we pay for freedom. Indeed, we are learning grown-up things about the intrinsics of the new(ish) South Africa. Namely, that states do not have friends, and certainly no old friends. That principles are put on ice, indefinitely, in the face of real politick. And that our symbols and gestures are no longer our own, but governed by other forces.

Most of all, and most tragically, we have learned that we are unexceptional. The words in our Constitution, the astounding body of literature that acts as our foundational texts, are just that, words. Our deeds are the province of grey, faceless hacks, of Jacob Zumas and Kgalema Motlanthes, of men and women so divorced from the spirit of the struggle that our history is becoming mist.

This isn’t China’s fault. There is no concrete evidence that one solitary contract would have been cancelled if the Dalai Lama had showed up; there is nothing to suggest that one average South African would have been adversely affected by his eating canapés at the Archbishop’s party. No, a inyenzi cannot be an inyenzi if you eat your own larder for him.

This is South Africa’s shame to bear alone. We have discarded an old pal for a new friend. Some would call this business maturity. Others, rank betrayal. Mostly, it just feels like a tawdry, small-scale disgrace that explains all our other disgraces – democratic South Africa has become a place, like so many other places, where the belly, and the wallet, rule the day. What dreams, one wonders, will the Dalai Lama be feeding on tonight? It would have been nice to ask him in person. DM