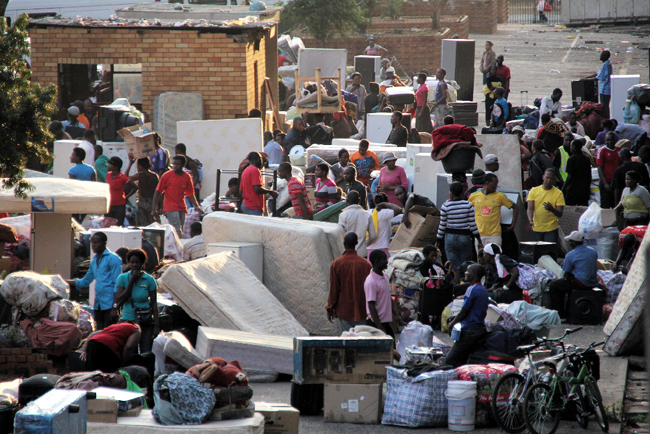 The now permanently-evacuated former residents of Schubart Park on Thursday turned to the Constitutional Court, asking it to return them home. That won't happen. But the highest court in the land probably will hear their plea, and may end up setting a hugely important precedent affecting many other communities. The political problem of an evacuation by force, though, that'll be somebody else's problem. By PHILLIP DE WET.

Simple yet profound questions are the business of the Constitutional Court, and the application by the people who until recently lived in Pretoria’s most notorious high-rise slum raises several of those. Is there such a thing as “constructive eviction”, the equivalent of constructive dismissal in labour law? Is it sometimes okay to ignore the niceties of the law if, say, you’re too busy saving lives? How far is too far, in simple geographical terms, when it comes to removing people from their communities, and livelihoods?

A brief recent history lesson, in case you missed it. Schubart Park, a set of apartment buildings on the outskirts of the Pretoria CBD, owned by the city of Tshwane, has been a headache for more than a decade, and has qualified as a slum for at least half that. The city has tried, and failed, to legally evict the residents. In mid-September electricity to the complex failed. The city says it couldn’t fix the problem, the residents say it wouldn’t. Either way, a riot broke out, the police moved in, the residents were forced out, and the High Court in Pretoria agreed it wouldn’t be safe for them to be allowed back in again.

That High Court decision, made after an urgent five-hour hearing, is what residents now want the Concourt to strike down. For that they have a host of legal arguments. More interesting, though, is the subtext of mistrust, betrayal, and maybe even a conspiracy against them.

The residents want the ConCourt to say they should immediately be allowed back into the homes, from which they are separated by a line of police, private security guards and dogs. Back into a death trap where the question is not whether people will die (in a fire, or a building collapse, or simply from disease), but when. It’s hard to believe that any court would allow that.

“There is a question of risk,” says Professor Shadrack Gutto, a constitutional expert with some experience on questions around evictions and director of the Centre for African Renaissance Studies at Unisa. “The court can not be seen ordering people back into a situation where they are likely to suffer some damage because of the nature of the property. From that point of view it is very unlikely that an order for their return will be granted.”

There are, however, two alternative demands from the residents. One is close on a no-brainer: alternative accommodation of an equal or higher standard than they had for all affected. The requirement for authorities to provide such is now firmly established in South Africa, even if, as in this case, they argue that an evacuation-made-permanent is not an eviction as such.

In between lies the true prize the residents are after, relocation “to an area in the near vicinity of the Schubart Park residential complex and to make alternative accommodation available in the Pretoria Central Business District”.

That’s a tough ask. The residents say there are 3,000 of them, the city of Tshwane has police intelligence estimates saying 8,000. Regardless, that is more people than could be accommodated in the CBD immediately, temporarily or permanently, even if money wasn’t an issue.

The residents say they must be in the CBD, where they work, where their kids go to school, where they’ve established community bonds. Tshwane wants to relocate them to Saulsville, part of the Atteridgeville township to the west of the city, about 12 kilometres away as the crow flies. In theory, at least, the city could afford that. The residents say that would cost them each R400 per month in taxi money, which they don’t have, plus the enmity of their new neighbours, who have made it clear they don’t want more poor people dumped on their patch. What they don’t mention is the possibility of xenophobic violence; a large percentage of the Schubart Parkers are foreigners, and Atteridgeville has had its share of trouble in that regard.

Others are already arguing that alternative housing in the middle of nowhere is no real alternative. The residents of an erstwhile squatter camp near Bapsfontein on the East Rand this month argued before the same Constitutional Court that they were moved too far away from their homes when the land under their camp was found to be prone to sinkholes. A date for judgment on that matter has not yet been set, but the two communities could find themselves sitting shoulder-to-shoulder when it arrives.

For city managers, the consequences of losing that argument could be dire. If the ConCourt finds that squatters, who illegally occupy land or buildings, must be housed within reach of their former homes, it would cost an awful lot of money. Johannesburg, in particular, would be hard-pressed to comply within any kind of reasonable time scale, and plans for rejuvenating the city by attracting middle-income residents would suffer a huge blow. It would also create a strong economic incentive for squatters to pick prime real estate in future.  There is also the possibility for a perverse incentive on the flip side of the coin, if the ConCourt does not create a new category of “constructive eviction”, as it is being asked to do. The people of Schubart Park believe the city at best exploited, and at worst created, a crisis that would allow them to be removed from their homes without a legal eviction order. If allowing people to live in fairly unsafe conditions until they become very unsafe (and maybe lightly encouraging riotous behaviour to bring things to a head) is a way to clear a building or a piece of land, eventual misuse of such evacuation powers seems inevitable.

Those are hard enough to balance, but the most difficult issue will probably not be addressed by any court. A significant fraction of the residents of Schubart Park are illegal aliens, who now face deportation. Even if they somehow escape that fate, there is no point in them queuing for new housing, temporary or permanent, because they aren’t eligible for any. At least some of them believe the evacuation of their buildings was an easy way to round them up and boot them out of the country. That gives others in a similar situation reason to fight evacuation, hard, even in the face of fire or flood or xenophobic violence. The next time the police need to clear a building fraught with imminent danger, things could escalate, and end very badly.

Gutto does not believe that is an area into which the Constitutional Court will venture. “The response from government will be that there is no intention of doing what people fear, and the courts have no basis at all of saying ‘we don’t trust you’. The court really has to demonstrate that it does not regard the executive with suspicion.”

Somebody, somewhere, will have to address it though, as part of the broader malaise of communities (local and immigrant both) who increasingly view all levels of government as untrustworthy, even conniving. At the moment those suspicions result in protest action designed to attract the attention of others, higher up in the political food chain, with a vaguely menacing show of potential force thrown in. If hope is lost, however, it is a small step to actively lashing out against the government. And then we’ll be in real trouble. DM