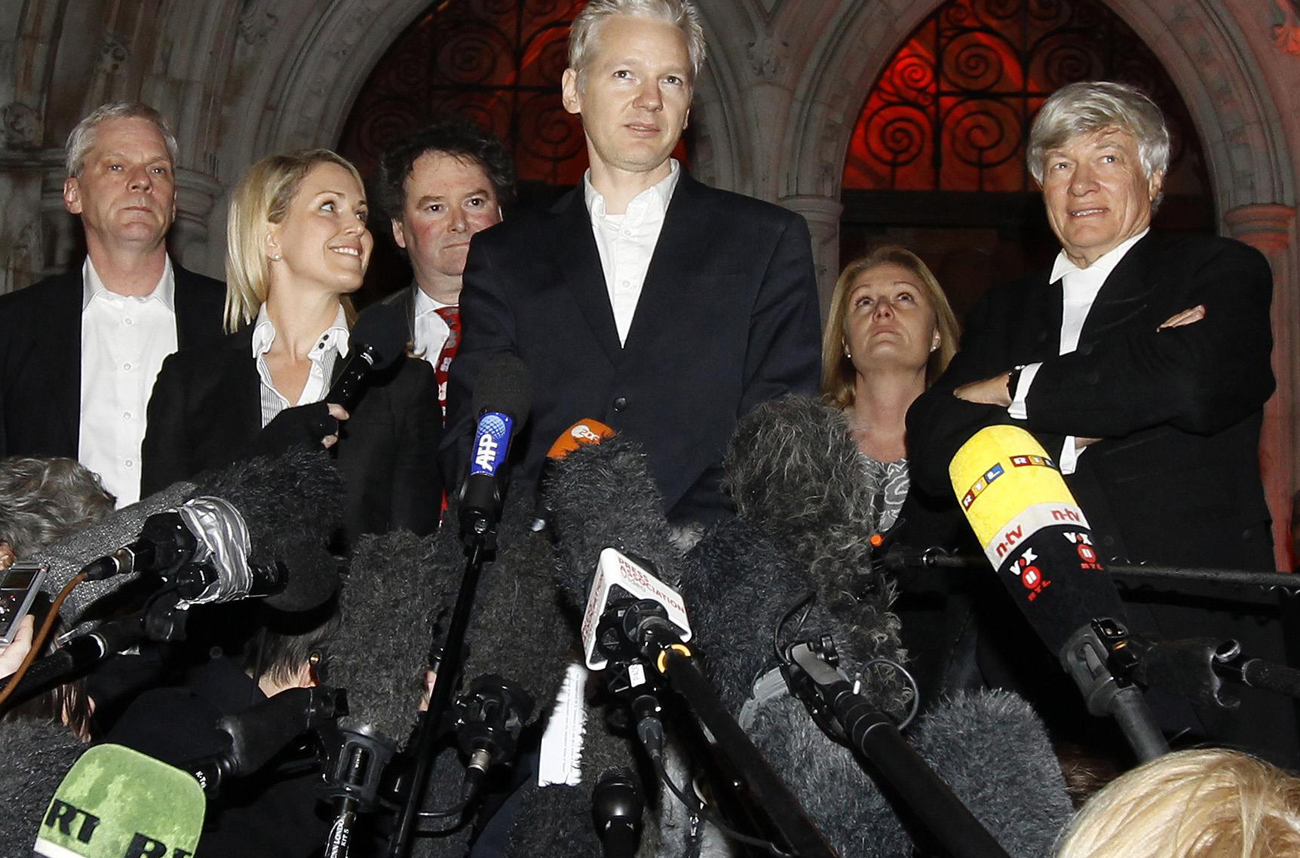 It’s like the Nadine Gordimer saga all over again. A global champion of free speech, a world-acclaimed voice for the voiceless, agrees to the publication of an authorised biography, only to renege on his/her first principles and withdraw consent when the final draft is seen. On Thursday, much to his annoyance, Julian Assange’s “unauthorised” biography is released in the UK. We wonder what Ronald Suresh Roberts would have said. By KEVIN BLOOM.

There are many precedents to the unauthorised biography that hits shelves today across the United Kingdom, but, from the South African standpoint, there’s really only one worth mentioning. It was a story, you’ll remember, that went something like this…

In 1996, five years after she’d won the Nobel Prize for Literature, Nadine Gordimer received a request from a young Trinidadian graduate of Oxford University and the Harvard School of Law. This young man had abandoned a career on Wall Street to monitor South Africa’s first democratic elections, and given that he’d also just published a strident book on African-American conservatives, he managed to secure a meeting at the great writer’s home. Which turned out to be a remarkably successful meeting, at least as far as the young man was concerned – Ronald Suresh Roberts, then just 28, left the big house in Johannesburg with the agreement of its owner, then 73, to participate in his writing of her biography.

A piece published in the New York Times, in December 2006, summarises what occurred next. “In clear, vigorous prose, Roberts deftly connects Gordimer’s life and work, from her childhood in a small mining town outside Johannesburg, where she was born to Jewish immigrant parents, through her decades in the struggle and on the world stage. Roberts conducted extensive interviews with Gordimer’s family, friends and comrades. But when he asked Gordimer what happened to her cousins Roy and Humphrey, whom she wrote about in her 1954 essay in The New Yorker, ‘A South African Childhood,’ Gordimer confessed she’d made them up — just as she made up her visit to the Kruger National Park, which she saw for the first time the year after the essay appeared. ‘Well, I fooled them,’ Roberts quotes Gordimer saying, with a laugh. ‘They were not to know the difference.’”

In the event, Gordimer did not like the final draft of the biography – amongst her many objections, according to Roberts, was the quotation of a letter in which she called Ruth First a “silly bitch” – and so she withdrew her approval. Bloomsbury Publishing in London and Farrar, Strauss and Giroux in New York, both of whom heaped praise on Roberts’s manuscript and both of whom publish Gordimer’s novels and short stories, dropped the biography like a bad date. The champion of the downtrodden, the world-acclaimed heroine of free speech, stood accused of the crime of censorship – and her refusal to comment on the matter made it look more than likely that she was guilty.

Fast forward to 2011, and the release today, Thursday 22 September, of a book entitled Julian Assange: the Unauthorised Biography. It is being published by the well-regarded British house Cannongate, despite Assange’s attempts over the last few months to have publication blocked. The British press, never a crowd to balk at a celebrity’s comeuppance, has been all over this huge quirk of fate – even the normally staid Financial Times, which weighed in with the following: “The irony that the operator of the world’s largest whistleblowing site, responsible for releasing hundreds of thousands of secret documents, will himself find his private comments aired in public is likely to raise a smile among diplomats and politicians worldwide. The US government and others have repeatedly condemned Mr Assange’s activities, in particular the leak of thousands of US diplomatic cables.”

The parallels with Roberts’s book, eventually published by a small South African press under the title No Cold Kitchen (a veiled mockery of Gordimer’s ability to take critical heat), are numerous. Like Gordimer, Assange originally consented to the book, and sat for dozens of hours of interviews. Like Gordimer, he thought that as a long-time champion of free speech and a principle called “The Truth,” he’d easily be able to withstand it when the spotlight was turned on him. Like Gordimer, he forgot his lofty ideals when he saw the final manuscript, and summarily announced that consent was henceforth withdrawn.

Unlike Gordimer’s, of course, the publisher of Assange’s biography did not buckle. Which isn’t to argue that Cannongate is somehow of a higher moral order than Bloomsbury or Farrar, Strauss and Giroux – on the contrary, it’s simply that they’re on the right side of the profit equation. Had the latter publishers gone ahead with Roberts’s book, they would almost certainly have lost the rights to Gordimer’s vast oeuvre, a collection that promises tidy annual returns on both sides of the North Atlantic (although not, surprisingly, in South Africa). By publishing Assange’s biography, Cannongate have lost…what?

Exactly. And they’ll only have been further helped by Assange’s legal bids to kill the contract (fantastic pre-launch publicity) and lead-up statements (for instance, “All memoir is prostitution.”)

Kind of makes you feel sorry for Roberts, who hasn’t appeared much in the local media since he was forced to settle the Sunday Times a rather large sum for costs in a lost defamation suit. No Cold Kitchen was a great book, after all, and what we at the Daily Maverick miss about him most (or maybe I should speak for myself) is quotes like the one he gave to the New York Times in 2006: “My experience with Gordimer is that she acted in relation to the manuscript like the stereotype of Thabo Mbeki, an autocratic control freak. He’s acted in the last two years like the stereotype of Nadine Gordimer, a champion of intellectual liberty.”

If Maverick’s sister Empire magazine were still around, a title where Roberts held a regular column, we’d definitely be asking him to write about Assange this month. DM