Tshwane gets rid of its high-rise slum – for now 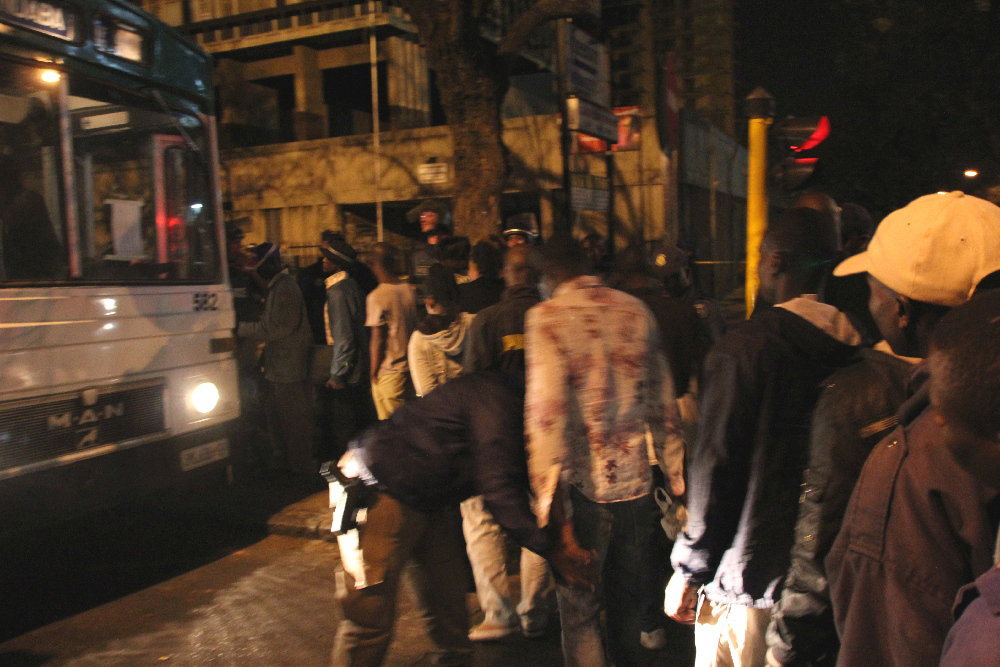 Late on Thursday night, the High Court in Pretoria ruled that the Schubart Park complex of apartments was too dangerous to allow "evacuated" residents to return. That presents a long-sought opportunity for the city of Tshwane, and is probably in the best interests of the legitimate erstwhile residents, if against the wishes of the majority. But was it really happenstance exploited, or a crisis engineered? And will other city governments substitute the paperwork of evictions for the ease of evacuations? By PHILLIP DE WET.

Shortly before midnight on Thursday, a pair of buses with a police escorts made their way from the Pretoria CBD towards Saulsville, a township on the outskirts of the city. As the convoy departed, a couple of bottles and many insults were hurdled in its direction. The small group of people inside the buses were on their way to emergency shelters provided by the city of Tshwane. The far bigger group outside, on the streets, had refused an offer of the same. Neither will be returning to their former homes in the Schubart Park complex soon, and if the city and an urgent court have their ways, they won’t be returning permanently for what could be years.

This is not the end of the long-running saga of Schubart Park, four 21-storey buildings that have become the worst high-rise slums in the city, and among the worst in the country outside of hijacked buildings. The complex is owned by the city, and at least some of the residents there held formal rental contracts, but conditions were horrific: festering piles of garbage three times the height of a man, pools of raw sewage and, for the past week or so, no electricity or running water. There are many ways to injure yourself or die, from fires to which residents would not be alerted and which could not be contained to falling down a pitch-dark stairwell.

It was those conditions, and the associated risk to life and limb, that saw Judge Bill Prinsloo rule on Thursday night that the city’s closure of the complex would stand. After a five-hour hearing on an urgent application by residents that they should be allowed to return, Prinsloo said especially children should not be living there. Four different experts from the city, on fire hazards, electricity, policing, and structural engineering had told him so. They had told him the problems with the buildings simply could not be fixed while they were inhabited. And the city had offered alternative accommodation with amenities equal to or better than residents had had before. Under the circumstances, Prinsloo said, the court would not take responsibility for possibly sending people back to their deaths.

But even though it is patently unfit for human habitation, many of the Schubart Park residents wanted to stay. It is close to the city, they say, and the economic opportunities it holds. They have raised families there, they are settled there, and they consider it their own. Much like residents of many squatter camps around the country (which Schubart Park resembles in just about every sense except the vertical) they want better conditions – but in the same spot.

So on Monday, those residents hope to take the matter directly to the Constitutional Court, where they remain convinced they will win. If they don’t do so very rapidly, though, the issue may become academic.

As things stand, Tshwane is under court order to provide temporary accommodation to every former resident for as long as it takes to refurbish the buildings, and by the end of Friday that order should be extended to require free transport to the city and the storage of furniture. Once the refurbishment is completed (and it is not yet clear how long that would take, or whether the court will set a deadline, but would be a massive undertaking), everyone will have to be returned – everyone legal, that is.

The authorities believe, and our informal polls have confirmed, that many of the now 8,000 estimated residents are illegal immigrants. They are not entitled to housing, and could face deportation instead. Others, who are not formally renting from the city (occupying either informally sub-let or hijacked apartments) will have a hard time returning. Still more who were living in very over-crowded flats will probably find themselves limited to the specified maximum number of inhabitants for each apartment, likely making living there too expensive for a big fraction. Schubart Park may end up being a much better place to live, years down the line, but none of these groups will be living there.

That was the motivation for some who refused the offer of emergency shelter; sticking it out now in hopes of returning legally or otherwise holds better hope for the future. For many, though, the reasoning was more immediate. Flats that sometimes contain all their worldly possessions (and, in some cases, pets) were on Thursday broken open by either police or marauders. Those doors that have not yet been forced open soon will be. Having not been allowed back in since Wednesday afternoon, residents don’t know what, or how much, they’ll be coming home to.

With that in mind, hundreds turned down the offer of buses and shelter for the night, instead gathering in groups soon scattered by police with the threat of rubber bullets. Then they drifted through the city, unable to go home, unwilling to be relocated and, with shelters already bursting at the seams, nowhere else to go.

Their plight is a legally tricky one, and could set important precedents both politically and legally. The city of Tshwane says they were not evicted, but evacuated in the face of imminent danger from fires linked to riots on Wednesday. The urgency of an evacuation means no court order is required before people are removed from their homes, as with an eviction. Accepting temporary shelter, and being moved voluntarily, would weaken the argument that this was, in fact, an eviction without due process.

It goes deeper than that, though. Some Schubart residents are convinced this whole episode is an elaborate conspiracy, complete with agitators deployed to start the rioting this week. That is unlikely. It is true, though, that things need not have got so out of hand as to require forceful evacuation; while even journalists could tell trouble was brewing on Wednesday afternoon, there was no significant police presence and no effort at crowd control (whether by negotiation or force) until after the situation had turned ugly. And while the city unquestionably has the duty to protect its citizens from harm in death-trap buildings, it didn’t let the opportunity to solve a decade-old problem slip away, but took advantage of the crisis.

Not that the residents of Schubart Park are blameless. They may not have believed they had other means at their disposal, but still chose to use violence to try to secure services. They may also be guilty of a conspiracy of their own; on Thursday night tyres were burnt in Saulsville, the location of the emergency shelters, in a pre-emptive protest at Schubart residents being shipped there. Rumour (utterly unconfirmed, and virtually uncomfirmable) had it that some of the more devious Schubart Parkers had deliberately ignited those Saulsville protests to make it impossible to move them there.

Spontaneous or not, there could well be more trouble to come in Saulsville. Like so many others, the township has a large number of people demanding housing and services. Now they will have a relatively coddled group installed in their midst, a pretty sure recipe for unhappiness.

Others fighting evictions in various parts of the country will be watching the Schubart saga, and may change their tactics accordingly. Other municipalities that have slum problems will also be watching, perhaps considering some emergency evacuations of their own, whether it be on the basis of dolomitic land that could develop sinkholes such as in the Bapsfontein case, or because of health fears, or any of a number of other grounds. Still, even if that could provide a loophole in the strict requirements for evictions, the principle that equal-or-better accommodation must be provided still stands. Doing things the Schubart way may be faster, but it isn’t cheaper, and it may not end up being easier in the long run. DM Photo: Police search a small group of Schubart Park residents before they board busses heading for Saulsville, the location of a temporary shelter set up by the city of Tshwane. Shortly before the High Court in Pretoria had rejected an application that residents be allowed to return home; the vast majority still refused to accept the offer of alternative accommodation. By Phillip de Wet.