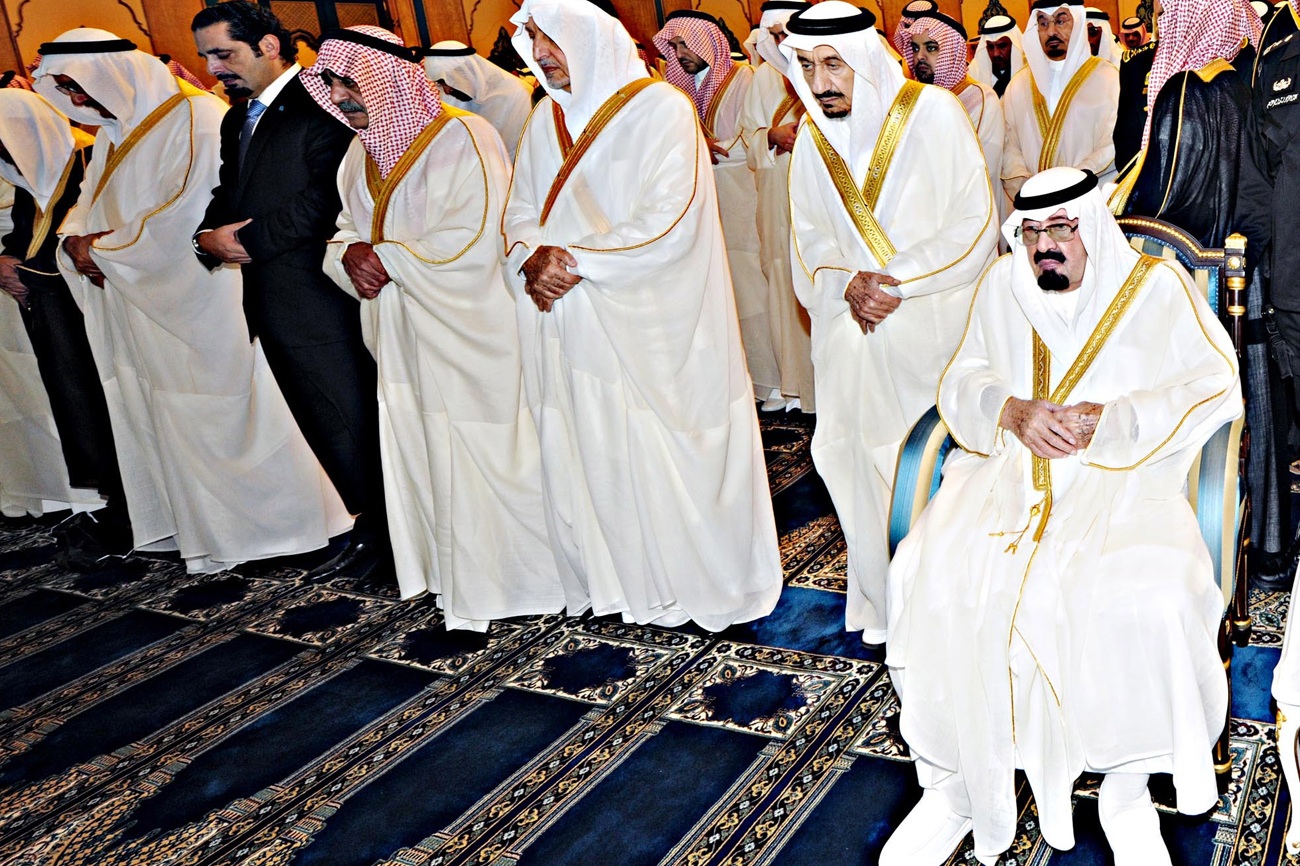 As if Saudi Arabia doesn’t have enough problems. The oil-ocracy now finds itself in an escalating international flap with an NGO called EthicalOil.org, which recently ran an ad on Canadian television deriding nasty Saudi crude, while lauding happy-go-lucky Canadian car juice as 100% oppression free. What is unfolding may be the dumbest bilateral contretemps fossil fuels have ever wrought. By RICHARD POPLAK.

Sepia. Whenever an NGO runs a public service announcement in that muted, evocative hue, you know they’re serious. You’re about to see puppies dying, children with flies crawling on their eyeballs, mouths lousy with cold sores eating a final morsel of UN air-dropped rice.

So it is with EthicalOil.org, an NGO devoted to telling consumers about their, um, oil choices. It’s produced a sepia-tinted advert that paints Saudi Arabia’s sweet, sweet crude with the brush of female oppression, and reminds viewers that the gunk pulled from the Alberta Tar Sands is—to coin a term the NGO may want to adopt as its own—100% Freedom Oil.

Like most NGO’s, EthicalOil’s messaging resembles a 19th  century Victorian novel. First, craft a vivid setting—like Dickens’ London, or Thomas Hardy’s Wessex. In this case, it is the bucolic and oppression-free province of Alberta, a place so pristine that the oil it produces works as a sort of Botox on your car engine, an automotive fountain of youth. Then, populate that setting with a stew of villains. Enter the Saudi Arabians, who, for every barrel of oil they extract, a local woman is denied the right to drive an SUV at high speeds while simultaneously talking on the phone and applying her make-up.

The PSA opens with the word “Fact” emblazoned over an oil barrel submerged in sand. “Last year,” a stentorian, computer-enhanced female voice informs us, “North Americans bought over 400 million barrels of oil from Saudi Arabia.” Helpfully, we are shown a map of Saudi Arabia, which we learn is nestled between Egypt, Bahrain and a place called, mysteriously, Kuw.

“We bankrolled a state that doesn’t allow women to drive,” insists the narrator, warming to her theme, while we see a figure in what look to be Jedi robes looking out over what might be Tatooine. “Five Saudi women drivers arrested!” screams a superimposed headline, courtesy of Associated Press. (In Ethical Oil’s eyes, the one universal and inviolable human right is the right to operate a vehicle. You got it wrong, John Locke!)

Now things get racy. A vaguely Mediterranean-looking gal wrapped in a headscarf appears on the screen, her come-hither eyes detracting from the fact that she isn’t wearing a hijab, a niqab or any other Islam-approved clobber, but rather something the wardrobe department divined from looking at images of the 2003 Paris Fashion Week. “[The regime] doesn’t allow them to work, or leave their homes without their mail guardians’ permission,” moans the narrator.

Then follows the pièce de résistance—an image the Marquis d’Sade couldn’t have framed better, one that probably has S&M enthusiasts lining up at the travel agent booking flights to Riyadh: The same model, her eyes closed in what can only be the throes of ecstasy, mouth tightly shut with an emphatic masking-taped X. Is it getting hot in here, or is it just me?

And while the PSA can’t recover from this image, the ad races on until we are reminded of the alternative: A shot of green, lake-riddled Alberta. “Today there is a better way,” the now cheerful narrator tells us. “Ethical oil, from Alberta’s oil sands. A choice we have to make.”

Indeed, it is a choice the Saudi Arabians have made, and their choice appears to be “no thanks”. Duly offended and determined to fight for their rights against this unimaginable slander, the Saudis have retained the law firm Norton Rose, which sent out cease and desist letters to Canadian broadcasters. This has perked up politicians after a summer of torpor, who in turn told the Saudi’s to mind their own business and stop trampling on freedom of speech, which isn’t such an idle threat if you look at Canada’s recent record.

Because here’s a little secret about Canada: The “true north strong and free,” as the national anthem puts it, is a bastion of right wing ideologues hiding behind pine trees, waiting for the right moment to lace Libya or some other developing-world backwater with Nato-approved smart bombs. Prime Minister Stephen Harper makes Rick Perry look like a Nancy-boy liberal from the East Village, while the mayor of the country’s largest city, His Honourable Worship Rob Ford, makes the Tea Party look like a bunch of spendthrift pinkos. (Recently, the left-wing leader of the opposition perished of cancer and every Canadian who lived in or near a gay village wrote messages in chalk on the ground, and cried on television. The rest of the country went on driving their pick-up trucks and shooting possums.) And Alberta? Alberta, according to the laws of relativity, can’t have a right wing because it doesn’t have a left wing. Let’s just call it big-C for Conservative, and leave it at that.

So Saudi Arabia better watch its step. And while the thought of Canadian-flown American fighter jets battling Saudi-flown American fighter jets over Montreal or Jeddah is genuinely appealing, it’s probably unlikely. What’s less unlikely is that this will develop into a proper diplomatic row, given that the ruling Tories have zero tolerance for countries that don’t have Evangelical Christians or Nicolas Sarkozy running the show.

But back to EthicalOil.org. Saudi Arabia, without seeming to try too hard, always makes it onto the annual Best of The Worst Theocracies List. This year, what with shoring up their cousins in Bahrain and continuing to be the de facto sponsor of international terrorism while fighting international terrorism, they may be right at the top. The West’s obsessive focus on the regime’s repression of women implies that life for men in Saudi Arabia is one long visit to the harem, but it isn’t—having been there myself, I’d argue that it’s one of the most depressing, wretched places on Earth, regardless of the equipment you’re sporting under your dish-dash.

Which doesn’t mean that EthicalOil has a point, mostly because there is no way of giving consumers a choice at the pumps. “No Saudi for me, please chief,” is a nonsensical statement, because oil isn’t like food—you don’t know where it comes from, there’s no information on the packaging and there never will be.

EthicalOil knows this, of course, and one comes to think that it may be rather sneakier than we give it credit for. The Alberta Tar Sands, a mainstay of the Canadian economy and a huge driver of employment, is nonetheless an environmental and social disaster. The proposed Keystone XL pipeline, from the Sands all the way to the Gulf of Mexico, would slice through some rather picturesque landscapes, summarily destroying the habitat of endangered foxes and farmers alike. The Tar Sands are an accident of history—a scheme dreamed up in the 1970s when oil cost $8 a barrel, to distract Albertans from the fact that they weren’t Texans. The caper was denounced as technologically untenable and ridiculously costly. Now, when oil routinely hovers around $80 a jug, the Tar Sands are the biggest game in town. That they have hardly been a boon to certain native groups, certain rivers and certain members of the wildlife community are facts routinely touted by celebrities too afraid to go to Darfur.

EthicalOil.org smacks of a diversionary technique. Bash the Saudis, and let’s conveniently lay aside those YouTube videos of rabbits drowning in rivers of sludge. Women’s rights or bunnies—your choice, pal. Thing is, it isn’t a choice. Or rather, the choice comes down to this: We either all make like Saudi women and get out from behind the wheel, or we will continue to fund brutal theocracies and environmental disasters alike. The two things aren’t necessarily morally equivalent, but it’s a bracing reminder that there is no good way to get oil.

As for the Saudi’s, I look forward to their counter campaign. Let’s see some shots of those drowning bunnies. In sepia, of course. DM