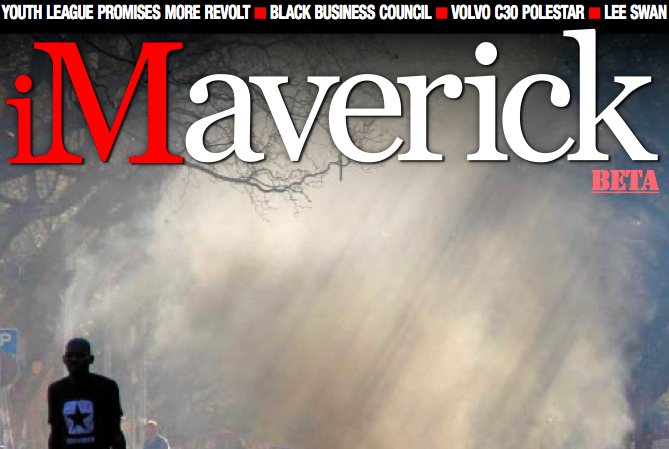 SCHUBERT PARK ERUPTS OVER SERVICE DELIVERY, OF A SORT

The rocks and bottles and tear gas and rubber bullets came out again on Wednesday, again because of a complaint involving electricity. Except this time it happened not in some distant township or squatter camp, but right in the heart of South Africa’s capital city. By PHILLIP DE WET.

From the same young people who grandly claim to have influenced the revolts that overturned the Egyptian government and others, come plans of mass action on financial institutions as well as the country’s Presidency. CARIEN DU PLESSIS reports on the ANC Youth League’s plans for 27 and 28 October.

REPORTER’S NOTEBOOK: BLACK BUSINESS COUNCIL’S BACK TO FIGHT ANOTHER DAY

When you hear the phrase “This is the BBC”, one mostly thinks of London – of empire fallen and influence that still reigns. But we’re also going to have to think of something else from now on as the BBC also means the Black Business Council. Revived as part of the falling out between Business Unity South Africa and some of the black organisations, the BBC sets sail in turbulent times. By STEPHEN GROOTES.

BLOOD ON THE EMPLOYMENT DANCE FLOOR, AND NO ONE TO CLEAN IT UP

The quarterly employment statistics released by Statistics South Africa suggest we’re in some serious trouble. Before blame gets heaped onto the government (although the five million jobs thing was a reach) it is worth considering that hardly any country in the world is hiring new people in huge numbers these days. By SIPHO HLONGWANE and PAUL BERKOWITZ.

CARIEN DU PLESSIS: BAH HUMBUG TO THE RUGBY WORLD CUP, BUT THE GREEN AND GOLD IS GODDAMNAWFUL

Right, go ahead, stone me with biltong and naartjie peels (no lager bottles, please) for saying this, but the green and gold jersey is thugly. Thoroughly ghastly. Gross as gross can be.

Africa’s economies have put up with a lot from the West: colonialism, neo- colonialism, trade barriers, resource extraction, structural adjustment… the list goes on. And just as we’re overcoming all these obstacles, showing solid macro- economic growth and a healthy response to the international financial crisis, it looks like the West might screw us over again, this time by mismanaging its own economies. By SIMON ALLISON.

South Africa’s foreign policy has been remarkably consistent in calling for negotiated settlements, despite the continued accusations that it is all over the place. The recent SADC diplomatic victory in Madagascar may be a vindication of this position, but focusing on ideology rather than the reality on the ground can bring problems when it (maybe) comes to implementation. By OSIAME MOLEFE.

iMaverick reported last week on the return of rebel leader Khalil Ibrahim to Darfur and his promise to escalate hostilities with Khartoum. Reports of new clashes indicate he’s making good on his threat already. By SIMON ALLISON.

AMERICA’S DRONES DESCEND ON AFRICA: BE AFRAID, BE VERY AFRAID

According to the Washington Post, the US is about to set up a “constellation” of secret air bases around the Horn of Africa, designed to ensure that American unmanned drone bombers can hit anywhere in the region, at any time. The move is aimed at the growing threat posed by al-Shabaab in Somalia, but if past drone offensives are anything to go by, there’ll be plenty of collateral damage. By SIMON ALLISON.

OBAMA: PALESTINIANS DESERVE A STATE – BUT NOT NOW

In his address to the UN General Assembly on Wednesday, US President Barack Obama emphasised America’s unshakeable commitment to Israel’s security, pouring cold water on the Palestinian bid to be recognised as a state. By KHADIJA PATEL.

Tuesday saw the first day of the court case in which six Italian scientists will stand trial for failing to predict the 2009 L’Aquila earthquake with sufficient accuracy. Their prosecution has attracted outrage from the scientific community for its potential to set a legal precedent. By REBECCA DAVIS.

Turkish Prime Minister Recep Tayyip Erdogan was quoted by the state-run Anatolia news agency on Wednesday saying he was no longer in contact with Syria’s leadership. Following Erdogan’s te?te-a?- te?te with US President Barack Obama, Turkey is now also considering slapping sanctions against its neighbour and one-time friend. By KHADIJA PATEL.

THE CAMPS WHERE NORTH KOREAN DISSIDENTS GO TO DIE

For years rumours have circulated about the existence of concentration camps in North Korea – camps that Kim Jong Il’s regime deny exist. But new Google Image satellite pictures reveal beyond doubt that the death camps are horrifyingly real. By REBECCA DAVIS.

SABMILLER FINALLY GETS FOOTHOLD IN ASIA-PACIFIC WITH FOSTER’S PURCHASE

After some last-minute drama and posturing from the Foster’s bigwigs, SABMiller has finally got its hands on the Australian brewery, and with it a big footprint not only on the continent, but the Pacific as well. It’ll also serve as a nice addition to SABMiller’s expanding Asia presence. By SIPHO HLONGWANE.

Online gambling has been illegal in the US since 2006, but it has continued under various guises. Now the feds have found a way to come down on popular website Full Tilt Poker, from a hundred miles away. The site’s owners have been running it as a Ponzi scheme and will face the wrath of a US federal investigation. By SIPHO HLONGWANE.

A small earth tremor deep underground near Carletonville injured five miners in the Blyvoor mine. This is the same mine that owners are trying to offload onto a Chinese investor. By SIPHO HLONGWANE.

TO CUT OR NOT TO CUT, THAT IS THE RESERVE BANK’S QUESTION

The Reserve Bank’s Monetary Policy Committee (MPC) is meeting this week to decide whether to keep interest rates steady or cut them in the face of a worsening economic outlook. PAUL BERKOWITZ looks at the arguments for and against a rate cut and decides that, ultimately, it doesn’t really matter what the MPC does if the country as a whole isn’t prepared to face up to much bigger problems.

GOOGLE+ OPENS UP TO AN UNCARING PUBLIC

If you went onto Google’s front page yesterday, you would have seen what was undoubtedly the least attractive “doodle” ever. The arrow pointing “forlornly” into the corner is the perfect metaphor for everything that is wrong with Google+. By SIPHO HLONGWANE.

The news that Facebook is to make a major announcement is usually greeted by its 500 million users as if Moses was set to return to tell us about the 11th commandment he left off by mistake. Excitement has consequently reached fever-pitch this week, with Facebook set to unveil something that will change everything, forever, on Thursday. By REBECCA DAVIS.

SPERM BANK TO REDHEADS: ‘NO THANKS’

Cryos International, the world’s largest sperm bank, has announced that it will no longer be accepting donations from redheads. The company claims it’s because it’s looking for more diversity among donors, but the subtext is clear: nobody wants ginger sperm. By REBECCA DAVIS.

Earlier this year, Lee Swan became the first African woman to take part in the Polar Race, a mad dash across islands and frozen sea to the Magnetic North Pole. She recounted the hardships and Hollywood blockbuster-style finish to SIPHO HLONGWANE.

Hot hatchbacks are like the trump cards of the motor industry. All the major brands have a contender in that segment, and while it’s not nearly the biggest in volume terms, it’s all about trumping the competition – be it with the most power, the quickest acceleration, the most advanced tech, or the highest top speed. Volvo’s contender in the hot hatch card game is the C30 T5 R-Design. By DEON SCHOEMAN.

The Springboks will be out to bank maximum points against Namibia when the two teams go head to head at North Harbour Stadium on Thursday. By PLANETRUGBY.COM.

Speculation linking Jenson Button with a move to Ferrari is refusing to go away. Both Ferrari and Button issued strong denials in June that the Briton would replace Felipe Massa at Maranello next season. By PLANETF1.COM.

HUGO HAS MOUNTAIN TO CLIMB

Jean Hugo will hope to end another prolific season on the Vodacom Origins of Golf series with a victory in the final at the Legends Golf & Safari Resort this week. He faces a course that is a beast in every respect, but that is to his liking. By PLANETGOLF.COM.