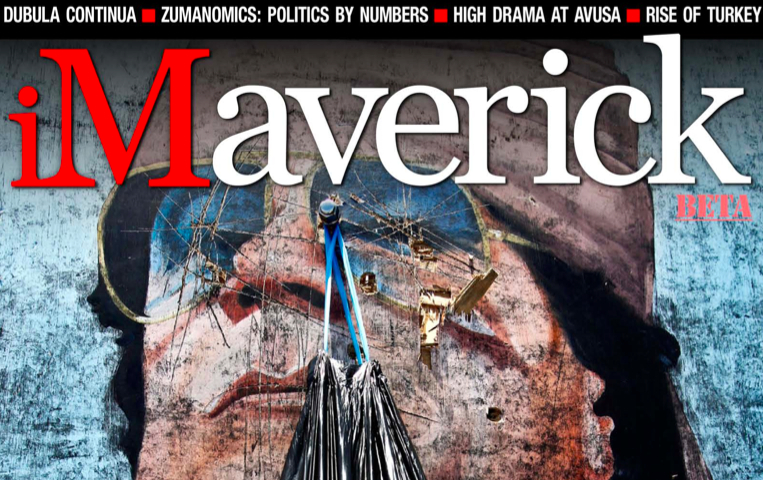 AU & SA finally concede Libyan reality; Dubula continua, as ANC set to request appeal of that judgment; Zumanomics: politics by numbers; High drama at Avusa; and the rise of Turkey. By iMAVERICK TEAM.

For the third year running, some of the sharpest business and leadership minds gather in Johannesburg. This year’s line-up includes Al Gore, Nouriel Roubini, Chris Anderson, Ricardo Semler, Dan Ariely and Taddy Blacher. Prior to the conference, a few good men had a brief back-and-forth with media in Sandton. By SIPHO HLONGWANE.

At the end of September there will be song again on the pavement outside the Johannesburg High Court where the ANC and its Youth League’s request to appeal the judgment against the singing of a certain song will be heard. CARIEN DU PLESSIS will be listening.

Here at the iMaverick, we like numbers. We think they go well with politics. And so when we get a nice big dose of them, we like to chew on them for at least five minutes before sending them on for further digestion. Because numbers matter. They tell you things. What people are thinking, and what they are likely to be thinking. In other words, they tell you the future. And yesterday ANC secretary-general Gwede Mantashe gave us some numbers that make us look again at Rule Number One of South African Politics. By STEPHEN GROOTES.

The blame game continues as public works minister Gwen Mahlangu-Nkabinde asks the court to cancel the multimillion-rand police lease contract with businessman Roux Shabangu, which she blames on officials and predecessors. CARIEN DU PLESSIS wonders if the department is swimming in corruption, or drowning in it.

HIGH DRAMA AT AVUSA AMID RUMOURS OF PRAKASH DESAI’S DEPARTURE

It has been a bit of an annus horribilis for Avusa, even though Prakash Desai’s still taking home a handsome incentive bonus. There was that ugly spat with Mvelaphanda over the UHC deal; Capitau was on, then Capitau was off; and that pesky shareholder activist just wouldn’t leave them alone. But the worst was yet to come this week as the company’s chairman and two non-executive board members resigned amid spelation that Desai would be next. By MANDY DE WAAL.

Most of us understand what is meant by ‘talking the talk’ and ‘walking the walk’. The former denotes mere words, the latter putting those words into action. Both demonstrate the power of the words we choose and use … and power is something everyone should be extremely careful and circumspect in using.

It’s National Braai Day this weekend, one of the most festive days on the South African calendar. But wasn’t there some other intention to this public holiday other than getting a few steaks and wors to sizzle?

Reality has finally dawned on the African Union, which announced from New York on Tuesday its recognition of the National Transitional Council as the de facto government of Libya. South Africa followed suit. It was not international pressure alone that shoved the AU closer to reality. Discord within its own ranks left it with no option but to recognise the NTC as legitimate representative of the Libyan people. By KHADIJA PATEL.

Zambians went to the polls on Tuesday to choose a new president, and while we don’t know who won (and won’t until Thursday), we can tell you how the elections were conducted, which is perhaps an even more important question. By SIMON ALLISON.

Uhuru Kenyatta, Kenya’s deputy prime minister, looks a model candidate for the 2012 presidential elections. He’s the son of an independence leader and was a voice of reason in the recent politician pay row. There’s only one problem… By GREG NICOLSON.

Are these the politest protests ever? For the second month in a row, organisers of huge anti-government marches have called off planned demos at the very last minute after not receiving permission from authorities. Doesn’t this defeat the point of civil disobedience? By SIMON ALLISON.

NO JOLLY ROGERS AT AFRICAN SEMINAR ON PIRACY

The Pirate Seminar, organised by the Institute for Security Studies in Pretoria, was a sober affair. Although there were a few naval uniforms, and one truly magnificent moustache, there were no peg-legs or parrots, and not an eye-patch to be seen. It seems that when admirals, captains, policy wonks and defence consultants meet to talk about piracy, they treat it with the gravity the issue deserves. By SIMON ALLISON.

Troy Davis has lost his last attempt to avoid death by lethal injection later today. He’s been on death row in Georgia for 22 years, convicted of a crime it seems he did not commit. Now he is a dead man walking. By REBECCA DAVIS.

‘OCCUPY WALL STREET’ PROTEST – NOT QUITE CAIRO, BUT TELL THAT TO THE NYPD

The banner on the website says “the resistance continues at Liberty Plaza, with free pizza ;)” But it’s not just the emoticons that let you know this is a public protest generated by social media. The twitter feed is reporting, on day four of the #OccupyWallStreet campaign, that one activist arrested by the NYPD is in “critical condition”. Could it be the start of America’s “Arab spring”? By KEVIN BLOOM.

The Al-Jazeera network spans 25 channels broadcasting in Arabic and English, and soon to be broadcasting news in Turkish, Kiswahili and Bosnian/Croatian/Serbian. The Al-Jazeera brand has grown exponentially, leading the way in contemporary news media. But the news that Al-Jazeera’s director general Wadah Khanfar had stepped down, to be replaced with a member of Qatar’s ruling family, raises uncomfortable questions about the expediency of the network to act independently. KHADIJA PATEL finds out that Khanfar actually holds South African citizenship and has been accused at various times of being an Islamist, a government stooge and, most surprisingly, part of an American conspiracy.

US MILITARY NOW FREE TO ASK AND TELL

As of 00.01 on the morning of 20 September, gays are officially welcome in the US military. Tuesday saw the official revoking of Defence Directive 1332.14 – better known as the ‘Don’t Ask, Don’t Tell’ policy. By REBECCA DAVIS.

The final nail in the coffin for UK tabloid News of the World was the revelation that the paper had hacked the voicemail of missing schoolgirl Milly Dowler. Now News International has offered her parents a payout of £3 million as compensation. By REBECCA DAVIS.

The Al-Jazeera network spans 25 channels broadcasting in Arabic and English, and soon to be broadcasting news in Turkish, Kiswahili and Bosnian/Croatian/Serbian. The Al-Jazeera brand has grown exponentially, leading the way in contemporary news media. But the news that Al-Jazeera’s director general Wadah Khanfar had stepped down, to be replaced with a member of Qatar’s ruling family, raises uncomfortable questions about the expediency of the network to act independently. KHADIJA PATEL finds out that Khanfar actually holds South African citizenship and has been accused at various times of being an Islamist, a government stooge and, most surprisingly, part of an American conspiracy.

TURKEY: POWER AND GLORY OF THE EMPIRE BEING REVISITED

By the 17th century, the Ottoman Empire was at the zenith of its power – spreading fear throughout Europe. Its territories ranged from deep inside Central Europe to the Persian Gulf, across North Africa to the Atlantic and to the border of Poland. The following centuries saw its powers gradually eroded. Until now. By J BROOKS SPECTOR.

ESKOM GETS A SLIGHT TINGE OF GREEN

Eskom, that coal-binger of note, has commissioned a firm to build two modest solar plants near coal power stations in Free State and Mpumalanga. By SIPHO HLONGWANE.

Could you build a house for less than R10,000? It seems fantastically impossible. Even our notorious RDP houses cost several times that. A group of architecture students and professors at the Massachusetts Institute of Technology came up with a herculean task: could students design a house that costs about R7,700? By SIPHO HLONGWANE.

THE MYSTERIOUS CASE OF THE GERMAN ‘FOREST BOY’

They’re calling him the ‘Forest Boy’: a teenager who arrived in Berlin a fortnight ago saying that he had been living in the woods for years. But he claims to know nothing further about himself – and neither does anyone else at this stage. By REBECCA DAVIS.

The exit of Francesc Fabregas from Arsenal caused a bit of a stink when a magazine claimed that he had said that he was leaving because he believed that Arsenal were no longer capable of winning trophies. Which he says he never, ever said. Fabregas has now confirmed that he’s received an apology, retraction and damages from the offending magazine. By SIPHO HLONGWANE.

Paul McGinley will lead off the tributes at a star-studded Viva La Vida evening in aid of the Seve Ballesteros Foundation, which is in a partnership with Cancer Research UK. By GOLF365.COM.

Japan coach John Kirwan has likened Wednesday’s clash with Tonga to a World Cup Final for his team, it’s a game they desperately want to win against opposition they consider beatable – and for good reason too.

BEHIND THE SUCCESS OF THE ENGLAND’S ODI TEAM

Winning more games than they are losing, reaching the knockout stages of the World Cup, and providing intermittent entertainment; England are a 50-over outfit transformed under head coach Andy Flower, as they are in Test cricket. PETER MAY investigates possible reasons why.