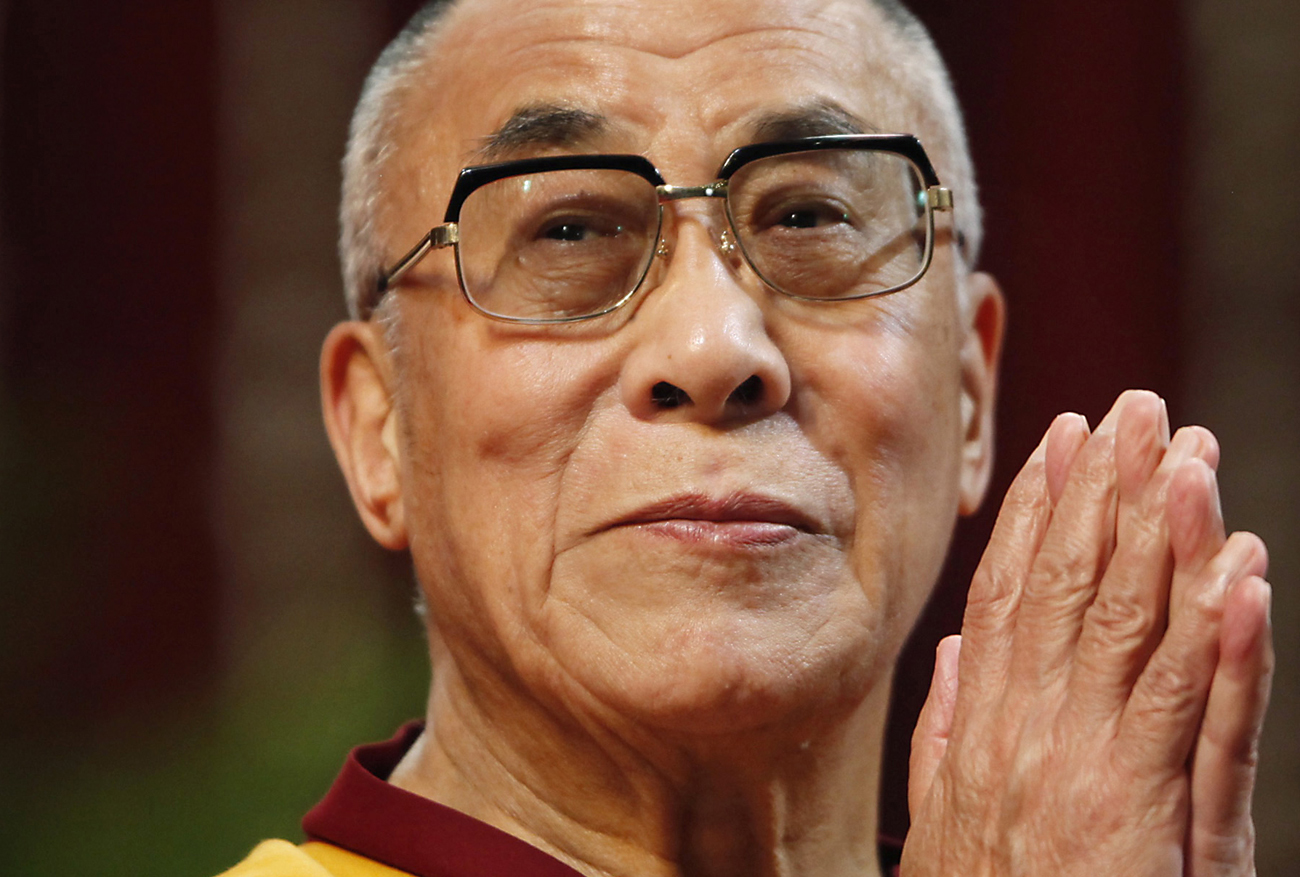 Outside of China, there is little doubt the Dalai Lama is the epitome of integrity, humility, leadership and kindness. The question now is whether South Africa’s rulers have the integrity and moral fortitude to aspire to the same lofty standards – or bend the knee, yet again, to the power-rattling of communist China. By GUY LIEBERMAN.

In mid-August of 1996 I sat across from the Dalai Lama in a suite at Johannesburg International Airport’s VIP lounge, as we reviewed his first-ever visit to South Africa. I learnt over the years that followed, and during the next two visits of the Tibetan leader, that this was standard practice. As his entourage went through the departure procedures, the Dalai Lama would take the opportunity to sit with his hosts and reflect on the trip. He would ask questions of us to get final clarity on certain issues, and in turn share his thoughts on anything we might want to understand from his perspective.

For us it established the Dalai Lama’s take on his experiences of South Africa, and also provided a close-up opportunity to get a better grasp of his worldview.

The highpoint of the ’96 visit was the first meeting between the Tibetan leader and then president Nelson Mandela. I asked the Dalai Lama if he would comment on that encounter. He was silent for a few moments, considering the question, and then responded by saying that he had had the good fortune to meet some of the world’s greatest leaders; kings, spiritual notables, presidents, social icons, his fellow Nobel Peace Laureates, luminaries from the sciences, as well as captains of industry and human rights activists. In preparing to meet with all of these people, he would study their stories in-depth and take into account the nature of their reputations.

I have often wondered what it was about Nelson Mandela that the Dalai Lama had witnessed. Was it that Madiba is simply unique among men, above his peers and beyond fault? Did he stand out from his comrades as someone entirely different from them? Or, as it’s been said, is Madiba essentially an African leader who holds to a certain moral code, one that is drawn deeply from the culture of his birth? The giant who is Nelson Mandela is in fact a man who expressed an intrinsically African integrity through his political will. My sense is that it was this aspect of Mandela that the Dalai Lama had perceived.

In preparing for the ’96 visit, I had presented the case for Tibetan freedom to the then deputy director general of the Asia desk at the Ministry of Foreign Affairs. She happened to be sensitive to the plight of the Tibetan people, and came at it from the perspective of having lived for years in exile as an ANC activist. Although not government policy, she, among more than a few other ANC comrades, resonated closely with the Dalai Lama and his open call for autonomy, and for the long-overdue relief from the brutal Chinese oppression in his country. In her mind, she saw political parallels with her president and the Dalai Lama.

Preceding the ‘96 visit, the Chinese applied heavy pressure on Mandela’s government. They instructed the president to deny the Dalai Lama a visa. Mandela made it clear to the Chinese that he was welcoming the Dalai Lama to South Africa as a friend and spiritual leader. But whatever the case, as president, he had the right to say who could and couldn’t visit his country. South Africans had experienced decades of their own oppressive regime telling them what they could and couldn’t do – the decision to grant the Dalai Lama a visa was South Africa’s. There was little the Chinese could do but threaten that it would weaken political and economic ties, but even more interesting, there was little the Chinese actually did once the visit took place.

The empty threats issued by the Chinese have never been acknowledged as being just that: empty. They have not once acted on their intimidations in South Africa, which preceded each of the three visits of the Dalai Lama (’96, ’99 and ’04). The Chinese understand that they need economic ties with Africa as much as Africa needs these links to China. There is too much at stake for the Chinese to interfere with the continued strengthening of this relationship.

The question now is whether our leaders can stand up in the way Mandela did, and welcome the Tibetan leader. Can they grasp that whether the Dalai Lama comes or not, little will change in the relationship between Africa and China.

There is yet another angle here, from the Dalai Lama’s position. The Chinese have always accused the Tibetan leader of being a stooge of the West. As a young activist who always wished to be more of a firebrand, I would elect to update my activities to Dharamsala (the seat of the Tibetan government-in-exile and home of the Dalai Lama), and hoped time and again for some sort of signal to heat up the campaign for Tibetan freedom. On one occasion, early in my career as an activist for Tibet, I travelled to India to brief the Dalai Lama on my efforts. I was proud to report that, when having recently presented to said deputy director general of the Asia desk and her staff in Pretoria, she had become very agitated about the Chinese embassy officials who had stormed into her office, uninvited, and issued their demands to deny the Dalai Lama a visa. “Yes, exactly, they will do just that!” I had exclaimed, which only caused further agitation on her part. I considered this exchange a successful step on the path to South African support of the Tibetan liberation movement. The Dalai Lama listened quietly and closely to my entire account and responded simply by saying: “No use making people angry. No use.”

When the Tibetan Nobel Laureate and Buddhist Master says it’s no use making people angry, it extends to the full spectrum of human dignity. Throughout the years of my activism, I received the same message from the Tibetan leadership and the local representative in Pretoria: we will do all we can to avoid embarrassing the South African government. The Dalai Lama will not come to South Africa if it is going to be overly complicated politically. He will accept an invitation from a host, but unless a visa is granted, which is considered an expression of welcome by the South African government, he will make no demands from his side. He comes as a guest, and only if he is welcome.

When seeking his endorsement of campaigns to boycott Chinese goods, the Dalai Lama often disagrees with Tibetan and Chinese human rights activists around the world. His view is that countries should rather fully engage China, welcome her into the family of nations, and bring her fully to her senses. While his method might not feed the fires of the activists, his view is broad, deep and patient.

The Dalai Lama’s political stance on China is clear, and has been for decades. He does not seek secession from China. He seeks a genuine autonomy where Tibetans can live freely in Tibet, without intimidation from the Chinese, practicing their religion and culture within the borders of a larger China. Being inspired by the democratic process, the Tibetans in exile (and via various channels within Tibet), have been through referendums regarding the political track they should follow. The Dalai Lama’s position, among his own people, is the Middle-Way Approach, which embodies his view of an autonomous Tibet within a unified China. If this is how he honestly and openly presents his case to his own people, why would the Chinese not believe him? Does this dynamic sound at all familiar to those South Africans old enough to remember our own political transition?

What this is, in effect, is the wisdom of His Holiness. His largesse is too close in form and character to that of Mandela. We have to allow ourselves to see this obvious comparison, and all the related associations regarding the freedom struggles of both Tibet and South Africa.

On the current issue of whether or not to provide the Dalai Lama with a visa to visit South Africa next month, our leadership has a clear choice: to look deep into the African soul and emulate Mandela’s actions by extending a hand of friendship, while at the same time understanding that it won’t, in fact, have any real impact on our relations with China.

Or, once again to yield as the people who will submit to the will of another nation, to constrict our spirit and our standing as a moral society, and close our doors on a genuine man of peace and the justified hopes of his people. DM Guy Lieberman has served as local liaison for the visits of the Dalai Lama to South Africa, and between 1995 and 2000 was a full-time activist for the Tibetan freedom movement.