Death and service delivery in Soweto 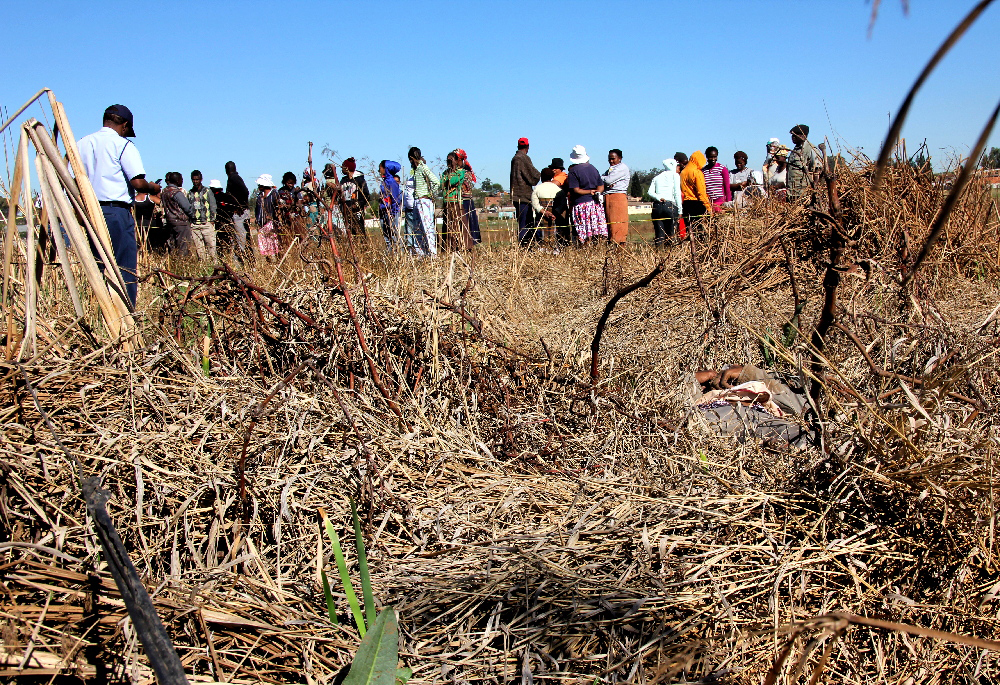 On Friday a man died a (presumably) lonely death on the outskirts of Soweto, seemingly electrocuted by one of many illegal wires tapping electricity for use by a squatter camp. He won't be the last either, one way or another, not even if the lessons in his death are heeded. By PHILLIP DE WET.

About halfway between Chiawelo (where residents are demanding cheaper electricity and using illegal bridging connections to get it) and Themb’elihle (where residents are demanding formal grid connections and have used illegal connections in the interim) lay the body of a man, hidden from sight by beds of reeds and slowly sinking into the marshy ground. He was found that way, seemingly untouched but stone dead, just a hands-reach away from a naked electrical cable running centimetres above the soil.

All may not be as it seems. Neighbours describe in lurid detail a love triangle in which the dead man found himself, and variously speculate that his death may have been suicide or something more sinister, with a plausible explanation provided to throw police off the scent. Whatever the official finding in the end, some will never believe this death to have been accidental.

But if he did not stumble and land with his hand on just the wrong spot, it is simply tragedy delayed. Others will almost certainly die in this place. In the squatter camp a couple of hundred metres away, TV antennas perch on roofs, sharing space with overhead power cables that feed into shacks. Trace those power cables back for a kilometre and a half, and you go through an area of marsh, past the dead man, over a broad, running stream, up a hill and end up at a gaping hole in a streetlight pole where an access hatch used to be. Along the way you’ll see any number of exposed stretches of wire, open splits and joins and only very occasional (and failed) attempts to either bury the wire or insulate it.

Even in full sunlight and knowing their exact location, these open wires can be almost impossible to follow through the grass, as they cross footpaths used by locals and their children. In the dark you’d stand no chance whatsoever. And the times at which they are not carrying current – such as when they are disconnected by police recovering a body – are few and far between.

“Come back tonight,” one local told us. “These people go away, maybe 10 minutes, then we’ll have power again.” Many echoed that sentiment throughout the morning: power is a basic necessity, there is no other way of obtaining it, so somebody will tap into the grid as it runs past the settlement. Then, as is the case in many other communities, he who runs the cable and maintains it may sell electricity on to neighbours. This isn’t a charity state, after all. Mothers in particular will admit that yes, the festoon of wires may be dangerous, but point out that the number of shack fires rapidly dwindle when there are fewer paraffin stoves in use. Fathers are more likely to talk about opportunity. “I don’t want my kids to live here,” one says. “When they have light they can study at night and get smart so they can leave. I want to be able to pay to buy that for them, but I don’t have a connection so I can’t get the power. I have to steal it.”

It is a set of arguments you can hear in scores of communities that do not yet have formal power connections. Like many of them, this camp is utterly unsuited for development; some shacks will be flooded by the nearby stream this summer and there are no roads big enough to admit emergency vehicles, just for starters. But people live here, and have lived here for a long time, and anticipate being here for some time, and are determined to make the best of their situation while they are.

In Chiawelo, meanwhile, just a stream and a railway track away, residents are gearing up for what they say will be a long series of marches and protest actions. Chiawelo has a formal power supply for each house, but residents say they can no longer afford the high rates. So they wage a never-ending battle, using bridging connections to bypass prepaid electricity metres, which are removed, then replaced, then made redundant when the entire area’s supply is switched off, until street protests sees it restored. The pattern is familiar and escalation slow, but there is no resolution in sight. Nor are there coverings for the holes residents cut into supposedly tamper-proof distribution boxes, making them as dangerous for curious children playing in the street as the open wires running through the veld just down the road. DM