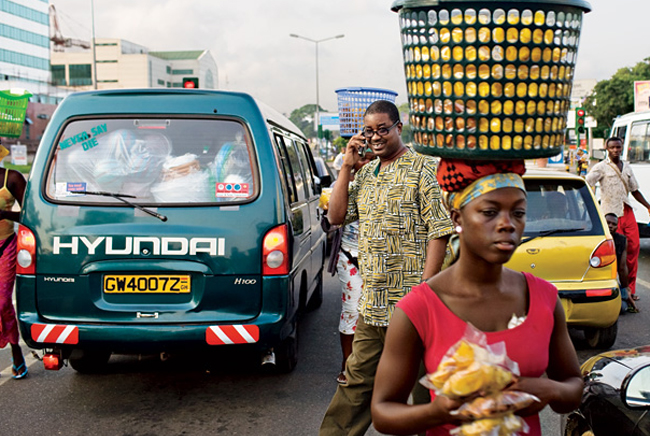 Innovator, disruptor, and West African software pioneer, Herman Chinery-Hesse wants to make Ghana the “Singapore of Africa”. Given he’s already created one of Ghana’s most successful software companies and is spawning innovations that solve barriers to trade between Africa and the rest of the world, he has a good chance. By MANDY DE WAAL.

Herman Chinery-Hesse is an anomaly for western media who can’t see beyond that stereotype that exists for those who don’t know this continent, and reduce it to clichés pulled from a pool of nouns that include dictator, corruption, conflict, hunger and Mugabe.

The western media call Chinery-Hesse the “Bill Gates of Africa”, a moniker which gives off-shore audiences who see the continent as one amorphous “country”. A successful Ghanaian technologist whose software company, the SOFTtribe, spawned systems that empower much of West Africa, it is Chinery-Hesse’s disruptive inventions that are making the world sit up and take note.

A generous man, Chinery-Hesse doesn’t mind the nickname that the likes of the BBC and Inc. Magazine have given him. “I am flattered, but I haven’t achieved what Bill Gates has achieved and I certainly don’t run around wearing this on a T-shirt,” he says. “It is positive and it motivates younger people, but I certainly don’t have the kind of wealth that Bill Gates has,” Chinery-Hesse adds before breaking into a deep belly laugh.

“I am an African innovator. I am a man who’s trying to change the continent, make things better and I’m trying to help myself a little bit while I do that.” Chinery-Hesse’s dream is to turn Ghana into the next Singapore, an ambition that can only be appreciated once you know who he is, where he’s come from and the contribution he’s making to Ghana and the continent.

Born in Dublin where his parents were studying at Trinity College, Chinery-Hesse went to Mfantsipim School, a prestigious place of learning also attended by Kofi Annan. “My parents ended up having international jobs so we lived in Zambia, Sierra Leone, Geneva, Uganda, and Tanzania. I went to high school in Texas, and then to Texas State University, the same alma mater as Lyndon Johnson.”

After varsity Chinery-Hesse moved to the UK where he buried himself in manufacturing technology before working as a manufacturing engineer. “I had the idea of being in manufacturing when I returned to Ghana, but I didn’t have money to set up a factory and couldn’t get a loan so I had to think about what it was I was going to do. The minute I saw my PC I realised my computer was a factory that required no capital, only brainpower, and that I could use it to accumulate capital.”

He laughs and says if his parents had been millionaires perhaps he would have ended up owning a car factory rather than a software empire.

SOFTtribe was started close on 20 years ago in Chinery-Hesse’s bedroom, which was sparsely furnished, but did have a chair, a bed and an Amstrad XT with a 20MB hard drive. Chinery-Hesse didn’t get to use the chair because he took in a former classmate as a partner and who was so large he needed the chair. So the SOFTtribe founder sat and coded on his bed.

“I created programmes which we sold and we grew very fast. We had to hire more people and soon my bedroom was full. When my father returned to Ghana and saw people overflowing from the bedroom, he evicted us to the outbuildings where we had an old Kelvinator air conditioner from the sixties that we used for five years. Believe it or not it never broke.”

SOFTtribe’s initial software programs were coded for the travel industry, and evolved into point-of-sale and payroll systems that drove growth. However, in 2006 the company hit a wall. SOFTtribe had largely saturated the market and needed to gear its business to compete with established global software companies for larger more lucrative government contracts. After partnering with Microsoft SOFTtribe could compete more aggressively with the likes of IBM and pursue a market that until then had been dominated by international players.

In 2007 Chinery-Hesse spoke at TED in Tanzania at a time when the Internet and SMSes flooded his mind with possibilities. Off the back of this talk he was able to raise funds from investors and create a company called Black Star Line “It is the eBay of Africa, but also an African PayPal in that it harnesses the power of the Internet and SMSes to enable global trade with this continent.”

The consumer-facing front end of this business is ShopAfrica53.com which is in beta and has yet to be officially launched, but it’s in the back end where the magic lives. Technologies that enable the trade site include The MX Payment Platform which was created to eradicate barriers to trade in Africa.

“If someone from Sweden orders product from someone in Ghana, the interface to them is through the Internet. But the Ghanaian trader receives all the information via SMS. However, there was no payment system to handle trade done in this manner so we created the ‘African Liberty Credit’ which is a mobile and Internet payment system, so trade can be initiated online, but the payment can be executed both online and through mobile,” says Chinery-Hesse.

An inventor in the best sense of the word, Chinery-Hesse is all about creating solutions to problems, but his genius lives in disruptive technology. “Yesterday we launched a new version of our payroll product which works off the cloud,” he says. “We partnered with a bank and an accounting firm, and anyone can use this payroll product, called Akatua, for free as long as they are with the bank which is our partner for this project.” A cloud-based offering, Akatua had its genesis in a payroll system designed by SOFTtribe which today is the software most widely used in Ghana to pay salaries timeously, sort out taxes, manage deductions and resolve the myriad other management hassles related with remunerating staff.

“We’ve also created what is called a Keba-Ekong! card, similar to the ‘Oyster card’ used in the UK, Oyster cards are an electronic ticketing system widely used in London and other parts of the UK for public transport. The Keba-Ekong! card is a re-useable plastic card that allows customers to purchase tickets for multiple purposes, such as concert tickets, journeys or even for buying goods from gift shops. Our pre-paid card is a general-purpose one so if you buy a movie ticket in Ghana you keep the card, which has a unique number on it and you can go to any gas station to reload the card.”

Innovation seems to be embedded in Chinery-Hesse’s DNA and it characterises everything he does. During the early days at SOFTtribe he realised the weak, rote-learning school system hindered the intellectual pool he needed to draw from to grow his business. “In the early days I trained everyone because I realised our education system had become weaker. When we grew substantially, I recruited across the continent and a few of my English friends flew in to help. We took a very different view to training because I believe that to be innovative you need to be a well-rounded person, which was not being done by the education system. We debated philosophy, watched documentaries, listened to the BBC and broadened people’s thinking so that they could innovate properly,” he says.

“Thinking is about understanding or accommodating a view that is different from yours and appreciating how other people see things and do things. This was part of the training together with communication, technological skills and everything I had learnt that was necessary for the company’s growth.”

Passionately positive about Africa, and a pragmatic atheist in a country known for its religiosity, Chinery-Hesse believes technology offers massive opportunities for repositioning and bringing wealth to this continent. “We are very innovative. But then I am African and I am biased. I believe we are more innovative than many other nations. I have a Nigerian friend who can dance at a funeral, got a first-class in maths at Oxford, acted in the Nigerian movie industry and was a politician later in his life. We have it, but we need to find the ability, education and encouragement to push in the right direction. Our colonial education systems gave us a legacy of rote learning, now we need to liberate innovative thinking to reinvent Africa.” DM How do the super-rich get away with paying a 3.4% tax rate?