In a show of self-confidence, Taliban attacks US's Afgh...

In a show of self-confidence, Taliban attacks US’s Afghanistan heart 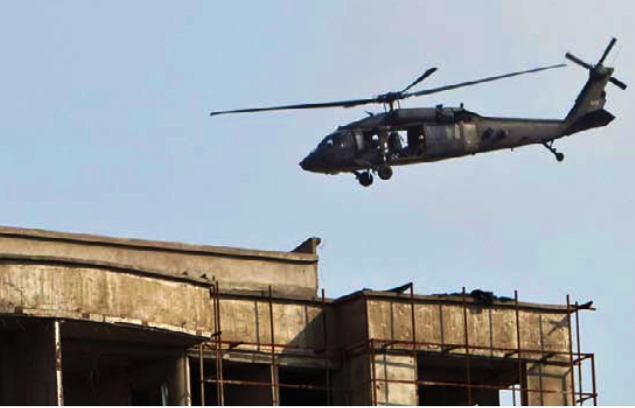 The battle for Afghanistan continued on Tuesday as a multi-pronged attack by Taleban militants sowed chaos and confusion in the capital Kabul. A stand-off between heavily armed militants and Afghan forces lasted 19-hours. It was only early on Wednesday that the Afghan government confirmed that the siege had finally ended as the last remaining militants were killed. While the latest attack raises fresh doubts about the readiness of Afghan forces to assume control of the country when Nato withdraws, the staggering loss of life in this war has become a side-show to the political playmaking. By KHADIJA PATEL.

The Taliban marked the tenth anniversary of the September 11 attacks on Washington DC and New York with a vow to continue fighting against the US-led coalition forces in Afghanistan. Zabihullah Mujahid, spokesman for Afghan Taliban chief Mullah Omar, issued a statement urging the international community to rally against the United States for its continued “illegal occupation” of Afghanistan. “Every year, 9/11 reminds us of the sad incident when the US attacked the Islamic Emirate of Afghanistan, especially when Afghans had no connection with the incident,” the message said.  The Taliban also vowed to continue its fight against foreign troops in Afghanistan. “These proud Americans should not forget that the Afghans have stood resolute against enemies like rocks and have inflicted many losses on them. The invaders never expected such a response from Afghans and they are still astonished about how the Pashtuns have retaliated,” the message said.

Ten years may soon pass since the US marked the ouster of the Taliban from power in Afghanistan, but violence in the embattled country has peaked in recent months. Beyond the astounding financial cost of this war, the ever increasing cost of human life is outrageous.  Recent months have seen high numbers of foreign troop deaths and record numbers of civilian casualties. War, they say, would end if the dead could return and in the absence of a miracle, this war continues to rage.

On Tuesday the reality of the war was once more propelled to the top of news bulletins as the Taliban struck at Nato and government positions across Kabul.  Militants armed with rocket-propelled grenades and suicide vests attacked government buildings, the US embassy and Nato’s main military base in Kabul. Chaos reigned in the Afghan capital as explosions and gunfire continued to rattle the city late into Tuesday evening. For more than six hours, Taliban militants occupied the upper floors of an unfinished building in Kabul, pelting bullets and rockets toward the US embassy, Nato’s Afghan headquarters and the country’s National Directorate of Security. The choice of targets was particularly significant – these targets represent the Taliban’s principal adversaries in the unrelenting war.   It was well after 9pm in Kabul when local police declared the battle over and the gunmen killed. Bilal Sarwar, a BBC journalist in Kabul, reported on Twitter that the chief of police in the city, Ayub Salangi said the attackers had arrived in a minivan and wore burkas. Less than an hour after declaring the battle over and all the gunmen dead, gunfire erupted again in the besieged building. While Afghan police began combing the building, floor by floor, searching for booby traps, a suicide attacker detonated his suicide vest on the seventh floor. Police then believed that two more attackers had camped out on the ninth floor. The battle would go on yet. Early reports indicate that the day’s drama has claimed seven lives and left 17 people injured.

Four of the wounded were victims of the attack on the US embassy compound. In a statement released to media, the American mission indicated that none of those injured were US citizens. “Four Afghans were injured in the attack on the embassy compound, none with life threatening injuries. They included three Afghan visa applicants and one local contract guard,” the statement said. For her part, US Secretary of State Hillary Clinton called the attack “cowardly” and insisted it would not deter US efforts in Afghanistan.

The attacks on Tuesday follow a similar attack on the offices of the British Council last month. Eight Afghan police officers and one foreign national were killed when the Taliban marked the anniversary of Afghanistan’s independence from Britain with an attack on the British Council building with a characteristic display of violence. Similar to Tuesday’s attack, the assault on the British Council compound began when a suicide car bomber detonated a vehicle at the front gate of the compound and then followed with a six-hour-long gun battle between well-armed Taliban militants and Afghan forces.

This spate of attacks will cast aspersions on the ability of Afghan security forces to take over security operations in the country after the scheduled withdrawal of Nato, but Afghan President Hamid Karzai insisted in a statement released on Tuesday night that the attacks would not hamper the process of transition.”The attacks cannot stop the process (transition) from taking place and cannot affect, but rather embolden our people’s determination in taking the responsibility for their country’s own affairs,” Karzai said. DM