Themb’elihle vs Chiawelo: a story of power and the cables that bring it 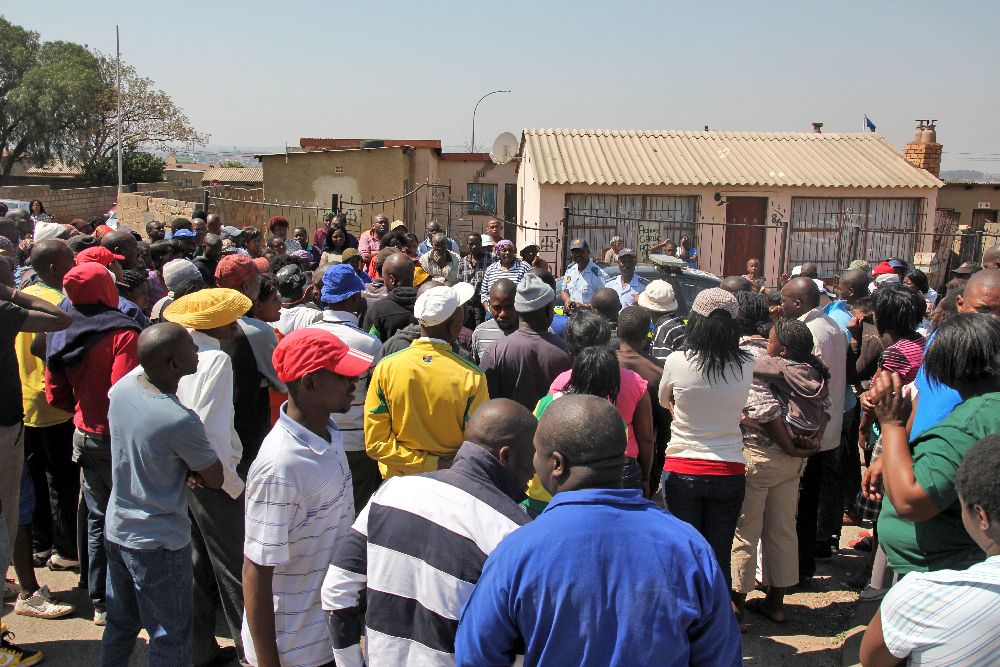 In Themb'elihle, residents last week violently protested their lack of (formal) electricity connections, saying being connected to the grid would save them money and give them economic opportunity. On Monday, residents of nearby Chiawelo in Soweto launched their own service-delivery protest – because while they have electricity, it has become so expensive they feel they have no choice but to steal it. BY PHILLIP DE WET.

The Chiawelo section of Soweto is just five kilometres away from Themb’elihle, but more than just a highway separates the two. In Themb’elihle there were hardly roads even before residents started erecting barricades to impede police armoured vehicles. Chiawelo features tarred roads that are remarkably pothole-free, considering that this is part of Johannesburg. Themb’elihle has a handful of brick houses, of which the residents are inordinately proud; Chiawelo is mostly made up of formal houses, even if those are huge crowded and extensively sub-let. Themb’elihle is metres away from the predominantly Indian Lenasia, while Chiawelo’s richer neighbours are almost all black.

Early on Monday morning, though, some who live in Chiawelo adopted the same tactics Themb’elihlers used the week before and blocked a major arterial running past their neighbourhood, in this case Chris Hani Road. Rocks, bricks, concrete trash cans and drain pipes made their way onto the road, tyres were set on fire, people danced and sang. This, the residents would say later in the day, was the only way they could get the authorities to take notice of their plight.

In Themb’elihle the result was, at best, mixed. After cars were stoned and one set on fire, the police grew gradually more forceful in their disapproval of the action. The rubber bullets came out, then the tear gas. Scores of people were arrested (most of them now free on bail), live ammunition came into play (there is still heated dispute as to whether the police were protagonists or merely targets) and residents were basically told to suck it up, because they would not be connected to the grid anytime soon.

In Chiawelo things never turned particularly ugly. The police intervened gently, major roads were cleared for traffic again, and negotiations ensued. A short while later, the lights came back on for the first time in four days. The much-mollified Chiawelo group vowed to continue their fight, but using approved means involving memorandums of grievances and political meetings. In Themb’elihle, meanwhile, all remained calm for the day as a small group plotted further “militant” protests, hopefully involving other nearby squatter camps.

The problem is that even if Themb’elihle wins this battle, the best it can look forward to is becoming Chiawelo down the line: better off in some respects, but still discontent enough to take it to the streets.

In Chiawelo the power went out before the weekend because, the residents believed, they were being punished for stealing it. The truth turned out to be a little more complicated than that, but doesn’t change the fact that electricity theft is rampant in Chiawelo. Recently installed high-security electricity boxes have neat triangles cut into their sides to provide access. That allows meters to be bypassed, so residents can, effectively, tap into the grid for free.

“We can get into the boxes easy, we can open them up all the way,” one self-proclaimed neighbourhood electrical engineer boasted. So why the small access holes, which must make the bridging operation all the more dangerous? “We have children running around here, they play on the street. This way is better for them.”

Those we spoke to in Chiawelo say electricity recently became unaffordable, citing a timeline that meshes remarkably well with increases in electricity prices to fund Eskom’s build programme. They don’t see it that way, though. They variously believe they are being ripped off by Eskom or by contractors in league with local politicians. Most are not particularly concerned about the why, anyway, just about the impact.

“We live here with our grandparents, we don’t work,” one young man told us. “They just get a grant. When you pay R900 for electric (sic), there is nothing left.”

Statistically the people of Chiawelo won’t be making more money besides what they receive from the government any time soon, while the price of their electricity will continue to rise well above increases in various social grants. They – and many other communities around the country – will find that basic necessity increasingly difficult to afford. Municipalities and Eskom have, and will continue to, swallow some losses due to non-payment and turn a blind eye to some illegal connections. Neither can continue to do so indefinitely, even ignoring the fact that selling power at a loss makes it all the more difficult to wire up new consumers.

Themb’elihle residents have a finely-honed set of demands. They don’t want houses, they say, proper sanitation or roads. They just want electricity, for which they are willing to pay. During the course of last week we heard many, many variations on the theme “we pay for paraffin anyway” and “electric will be cheaper” and “we can’t run businesses without electric” and, most of all, a single phrase so well-rehearsed it is repeated nearly verbatim, in English, every time: “we’re not asking for anything free, we want the chance to pay”.

But Themb’elihle is no richer than Chiawelo. The percentages of those who have jobs are, based on our rough polls, remarkably similar. Ditto the number of social grant recipients. Themb’elihle is, if anything, a slightly younger community, which means fewer old-age pensions. The R300 to R500 that residents tell us they spend on paraffin per month will buy some electricity, on top of a free basic allocation, and that may make their lives easier – up to a point. After which they too will almost certainly start to chafe at a new set of problems.

About half those we spoke to in Chiawelo believe that the ANC can bring them relief, the other half express disillusionment with the party. In Themb’elihle there is near-universal dissatisfaction with local elected leaders, in Chiawelo the community was a lot more conciliatory when their lights came back on after intervention by their councillor. In both cases, though, politics, and street politics, come on top of a very real, very economic problem, which local-level politics simply cannot address. DM