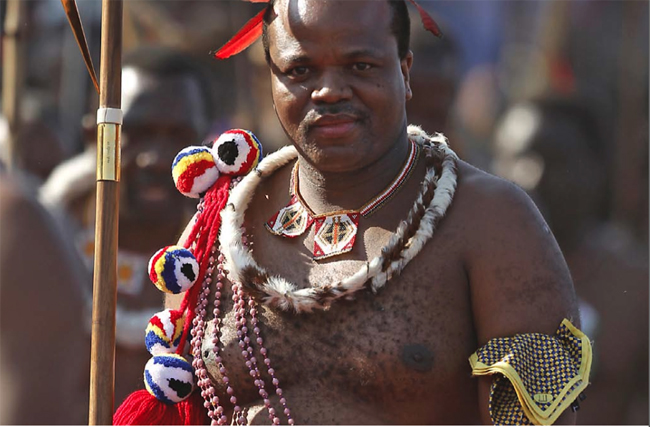 MTN denies reports that its mobile service was cut before and during anti-government demonstrations in Swaziland on Monday. But their protestations of innocence are undermined by their exceedingly cozy relationship with King Mswati III and his monarchy, and their need to protect their lucrative monopoly. By SIMON ALLISON.

Swazi protestors organising themselves for the first day of anti-government protests on Monday found communication difficult as mobile phones stopped working in the capital Mbabane, according to organisers. The People’s United Democratic Movement (PUDEMO), one of the instigators of the planned week-long protests, claims that MTN Swaziland deliberately suspended service, and that it’s not the first time they’ve done so. PUDEMO say that mobile service was cut on the morning of the protests, just as it was last year during the first week of organised anti-government demonstrations.

Mancoba Nxumalo, a Swazi freelance journalist, confirmed reports that MTN service was down for a period on Monday. “Yes it is true, I use my Swazi number and it was down yesterday. Whether this is a routine ‘maintenance problem’, as it is always claimed, or a deliberate plan cannot be verified for now. But in times of protest action in Swaziland it has become more like a norm that MTN would suddenly have ‘network’ problems. This is seen as a strategy to disorganise those who use cellphones to communicate leading to protest actions.”

Other sources, however, disputed this version of events, saying that cellphones worked and that the allegations against MTN were likely to be exaggerations by the pro-democracy activists.

MTN itself denies that service was cut on Monday at all, saying the only interruption in service came on Sunday night and was swiftly resolved. “There has not been nor will there be suspension of service. We experienced high volumes in calls on Sunday. This resulted in a system failure for a few hours… The technical glitch was resolved early on Sunday evening. MTN is operating normally in Swaziland,” said Rich Mkhondo, spokesperson for the MTN Group, in response to an iMaverick query. MTN did not respond to requests for further comment.

But MTN’s operations in Swaziland have never been that normal. The company’s in the unusual position of enjoying a complete monopoly in the mobile market, which is lucrative. They’re also extremely close to the monarchy. King Mswati III personally owns an unspecified percentage of MTN Swaziland, while the government telecommunications company, the Swazi Post and Telecommunications Company (SPTC), is the major partner in the company with 51%. But SPTC is in dire financial trouble, and had the bright idea of starting their own mobile network to compete, even though they own the majority of MTN Swaziland. MTN wasn’t happy; they’ve got a written monopoly agreement, and they’re not keen on any new competition. The matter is currently before the judiciary, which is ultimately controlled – as is customary in an absolute monarchy – by the king. MTN, in other words, have a strong motivation to keep him happy, especially as they’ve been in trouble with the monarch in the past.

According to a Wikileaks cable released last year, MTN was poised to sell extra shares to SPTC until the deal was blocked by Mswati, who wanted to buy shares for himself at a lower price. In apparent retaliation for MTN’s curious desire to sell shares to the highest bidder, Mswati refused to renew the work permit of the MTN Swaziland CEO, insisting that a Swazi national be appointed in his place.

MTN Swaziland has been implicated in allegations of political abuse before. According to the Swaziland Solidarity Network (SSN), MTN was involved in a furious King Mswati’s investigation into reports in South Africa that one of his wives was having an affair. “MTN Swaziland, being the primary electronic means of communication between journalists, has been secretly ordered to investigate all phone calls made in the past week to in order to identify those who might have communicated with South African journalists,” the SSN claimed. DM