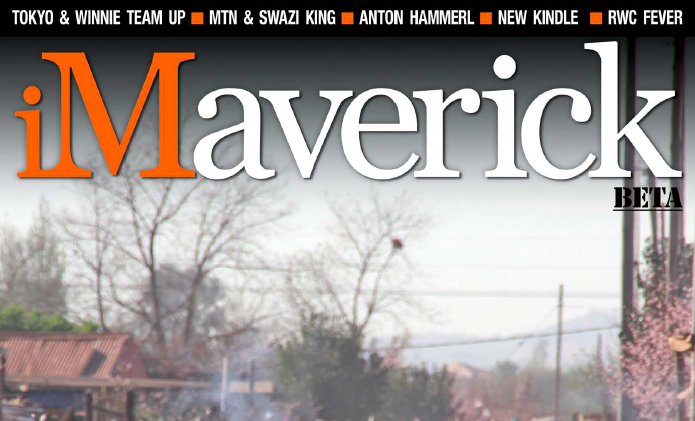 Five lessons from Themb'elihle; Tokyo and Winnie team up to fix toilet mess; MTN's interests in Swaziland; Friends of Anton Hammerl set up fund for his kids; the new Kindle's challenge to the iPad; and our Rugby World Cup predictions. By iMAVERICK TEAM.

As rocks and rubber bullets and more deadly ammunition continued to be exchanged in a township just outside Lenasia, PHILLIP DE WET looks at what we’ve already learnt from the latest service-delivery protest – and what it implies for South Africa’s future.

MOGOENG’S APPOINTMENT LIKELY TO STEAM AHEAD

President Jacob Zuma seems to be asserting his power to appoint the Chief Justice by cancelling a consultation with DA leader Helen Zille, while Cosatu told the ANC to stop being paranoid about its president. CARIEN DU PLESSIS reports.

TOKYO ROPES IN WINNIE TO CLEAN UP TOILET MESS

Human settlements minister Tokyo Sexwale looked flush as he announced that ANC stalwart Winnie Madikizela-Mandela would head his sanitation task team set up in response to the pre-election toilet saga. Which, of course, wasn’t his fault at all. By CARIEN DU PLESSIS.

ANOTHER MUNICIPAL YEAR PASSES – ALONG WITH WASTED CHANCES

The treasury released financial results for the fourth quarter of the 2010/11 municipal financial year. PAUL BERKOWITZ compares the numbers with previous years and reflects on another year of wasted opportunities.

Justice Minister Jeff Radebe proudly announced that President Jacob Zuma has initiated a record 18 probes by the Special Investigating Unit in the past year. But government is still dithering on one such case, more than five years after the alleged corruption. CARIEN DU PLESSIS reports.

J BROOKS SPECTOR: 9/11 certainly was an extraordinary moment in American – and world – history and its influences are continuing to ripple outward into the future. But let’s go back to a time just before that fateful 11 September.

The trial of Victoire Ingabire, the opposition presidential candidate locked up by Rwandan President Paul Kagame, begins in Kigali this week. But while Inagbire argues her case, Kagame’s government finds itself facing judgement in the less pliable court of international opinion. By SIMON ALLISON.

TWO WEEKS OF LOVE AND HOPE IN SOMALIA

In a world where the hyperbole of disaster teeters on the brink of becoming vapid hype, NICOLE JOHNSTON found resilience, resourcefulness, hope, dignity, ubuntu and humanity.

MTN denies reports that its mobile service was cut before and during anti-government demonstrations in Swaziland on Monday. But their protestations of innocence are undermined by their exceedingly cosy relationship with King Mswati III and his monarchy, and their need to protect their lucrative monopoly. By SIMON ALLISON.

At least 30 demonstrators were arrested during an anti-government protest in Luanda on Saturday. As pre-election politics hots up in Angola, the opposition and Human Rights Watch are calling for them to be released. By THERESA MALLINSON and KHADIJA PATEL.

After a run-in with the Kagame government, Rwandan fortnightly Ishema has ceased publication for a month – presumably until the heat is off. Given the current media climate in Rwanda, the ever-present danger of self-censorship looms large upon its return. By THERESA MALLINSON.

The long-awaited corruption trial of former French president Jacques Chirac began in Paris on Monday. Those hoping to see Chirac face the music in the dock will have been disappointed. His mental condition will likely prevent him ever setting foot in court. By REBECCA DAVIS.

OBAMA SAYS ‘YES’ TO BUSINESS, ‘NO’ TO ENVIRONMENT

US President Barack Obama chose to curry favour with Republicans and big business late last week by scrapping plans to tighten up existing US smog laws. It’s a move that has done him no favours with environmentalists. By REBECCA DAVIS.

PRISONERS IN DUBAI: THE QURAN SHALL SET YOU FREE

The UAE government offers various incentives to prisoners – memorising the Quran gets you a reduction in jail time; losing weight can earn you cash. However, such initiatives do little to improve the country’s reputation when it comes to human rights. Releasing the five activists detained in April on what appears to be trumped-up charges would count for a lot more. By THERESA MALLINSON.

COULD THE KINDLE SHAKE THE IPAD OUT OF ITS TREE?

Critics are positively slobbering over the new Amazon Kindle. No images of it have been released yet, but those who have played with it say Amazon may have made a device that will give Apple’s iPad a run for its money. One clue they may be right? It is very well priced. By SIPHO HLONGWANE.

Google is to trim the fat off its product line-up. Ten of its products will be discontinued in the very near future. You’ve probably never used any of them anyway. By SIPHO HLONGWANE.

The Honda Motor Company has announced a worldwide recall of its Jazz and the CR-V models due to a fault in the driver’s window, only months after Toyota untangled itself from a three-year recall scandal. Insert your own “Jap scrap” joke here. By SIPHO HLONGWANE.

KEEPING UP WITH THE KUNENES

Sushi-and-champagne-guzzling millionaire Kenny Kunene hit the headlines – again – this weekend when comedian Loyiso Gola used the occasion of the launch of his reality show to make some hardhitting criticisms. It’s just the latest controversy to hit the TV programme before it even airs. By REBECCA DAVIS.

San Francisco industrial designer Yves Béhar became the first designer to win the prestigious Index Award twice. Recognising that in the land of the blind, the one-eyed man is king, Béhar’s design solutions simultaneously tackle both the stigma and cost involved with wearing eye-glasses for schoolchildren in Mexico, proving that beautiful design can, in fact, solve some of the world’s problems. By CARIEN ELS.

SOMETHING WRONG IS AFOOT IN CANADA

It’s a mystery that has consumed the Canadian province of British Columbia for four years: human feet keep washing up on the beaches. What on earth is going on? By REBECCA DAVIS.

FRIENDS OF ANTON HAMMERL RAISE FUNDS FOR HIS KIDS

This writer never met late photojournalist Anton Hammerl, slain in Libya on 5 April. What is abundantly clear though, is that he was a kind-hearted man who formed strong, lasting friendships. Now his friends around the world have banded together to set up “Friends of Anton”, an online campaign to raise money for his children’s education. By THERESA MALLINSON.

Developments in artificial intelligence mean that software can now mark assignments – and not just multiple-choice tests, but complex, written answers. Counterintuitively, students have responded well to this automated feedback so far. By THERESA MALLINSON.

AND A SIDE-ORDER OF FRIED BUBBLEGUM, PLEASE

Is there anything Americans won’t fry and eat? The latest horror to come out of the land of the brave is fried bubblegum. No, we’re not comforted by the revelation that it isn’t technically bubblegum. By SIPHO HLONGWANE.

Springbok fly-half Butch James says his team-mates have the same quiet belief they had heading into the 2007 Rugby World Cup in France. By PLANETRUGBY.COM.

SUAREZ OUT TO DAZZLE

Whether it is a step-over here or a neat jinx there, Liverpool ace Luis Suarez is confident he can overcome any opposition defence. By FOOTBALL365.COM.

Sir Alex Ferguson wishes people wouldn’t get carried away with the debate over whether Barcelona are the greatest ever football side. By FOOTBALL365.COM.

It’s T-Minus three days, and counting, until the most euphoric (or depressing) event of the South African sporting calendar kicks-off. And we can’t wait. STYLI CHARALAMBOUS previews Rugby World Cup 2011 and what we can expect from each pool.

SHOULD ENGLAND HAVE PICKED AN INJURED CAPTAIN?

It came as no surprise when England skipper Lewis Moody was ruled out of his team’s opening Rugby World Cup clash with Argentina on Saturday. By JULIA HARRIS.