Youth League to party even as its world is ending 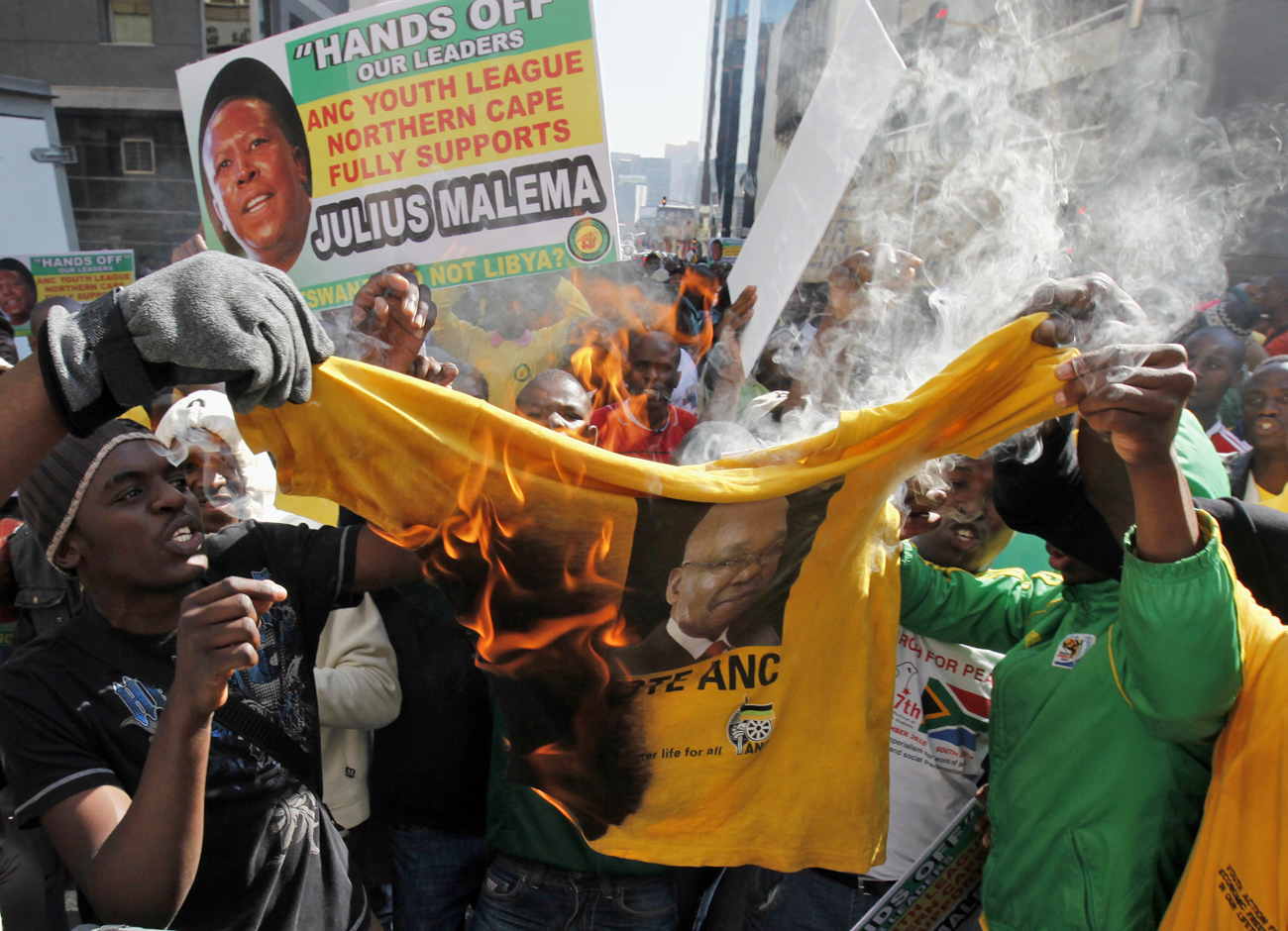 The ANC Youth League is way beyond retirement age, but the unprecedented disciplinary action its leaders are facing will energise its 67th birthday celebrations like never before. CARIEN DU PLESSIS puts on her party hat.

The kids are really putting the ANC disciplinarians through their paces. The legal team of ANC Youth League leader Julius Malema and his fellow league officials have persuaded the mother body’s disciplinary committee to postpone disciplinary hearings until next Sunday, a day before the League’s birthday on 12 September.

The disciplinary committee is expected to hand down judgment first on the charge that Malema and his fellow four League officials – deputy president Ronald Lamola, secretary-general Sindiso Magaqa, his deputy Kenetswe Mosenogi and treasurer Pule Mabe – stormed a meeting of the ANC’s top six officials, and then it will listen to Malema’s case over the next three days.

It’s been reported that in their hearing on Friday the youngsters used the defence that ANC secretary-general Gwede Mantashe invited them to the office to come and see for themselves that their meeting with the ANC officials had been cancelled.

Another story claimed Mantashe had offered the young lions fruit at the meeting, but these turned out to be poisoned – in the metaphorical sense of course.

Meanwhile League spokeswoman Magdalene Moonsamy confirmed that the League’s plans for its birthday celebrations would go ahead. She said there was a programme for activities in all provinces, but she did not have the details with her.

On 18 August the League’s national working committee declared it would unveil details of “mass protests” next Monday, on its birthday. This would include marches by “young people, unemployed youth and informal settlement dwellers” on “strategic sectors of the economy”, which it listed as the Johannesburg Stock Exchange, the Chamber of Mines, AgriSA and the Union Buildings.

The League was criticised for the chaos that broke out on Tuesday, the first day of Malema’s hearing, when stones and other objects were hurled at journalists and police, and when a crowd of Malema’s supporters attempted to storm Luthuli House. City Press reported that long-time Malema ally Jacob Lebogo, the League’s secretary in Limpopo, co-ordinated the action, despite denials by Malema and the League that they had any knowledge of any coordinated activities.

Businesses in Johannesburg’s city centre, as well as the DA in the province, have appealed to the ANC to stick to its decision last week to move the hearing to outside the city centre. The ANC was forced to reverse this decision within hours of announcing it after Malema objected.

Johannesburg CBD law firm BDK attorneys has threatened to take legal action to prevent the hearings from taking place at Luthuli House, saying their business was disrupted as clients were too scared to enter the city centre. The Gauteng provincial government building has also laid charges after 18 windows of its roads and transport building were broken.

Meanwhile, more dirt surfaced about Malema’s business dealings in City Press (his business partner and tender king, Lesiba Gwangwa, paid R200,000 towards his Sandton house) something which has become a regular Sunday feature by now.

Malema’s suspension from the ANC could mean that he would be left to fend for himself if the Hawks moved to arrest or charge him for his apparently dodgy dealings, but it is also understood that he was planning to appeal his suspension all the way to next year’s Mangaung conference if necessary.

Also on Malema’s case are those brave defenders of President Jacob Zuma, the ANC’s Umkhonto We Sizwe Military Veterans Association. The ex-soldiers took aim at Malema and his cohorts during its weekend deliberations, but only after fighting about money among themselves first.

The ANC on Friday dismissed Malema’s 22 arguments on why the charges against him should be dropped. Supporters again gathered in the city centre and rolls of razor wire were put out by the police around Luthuli House, but the day proceeded mostly without incident – and without a public appearance by Malema.

But the young ones on Friday challenged the ANC’s patience again by making blatant pronouncements about the party’s succession battle, calling for Deputy President Kgalema Motlanthe to be elected in Zuma’s place at the ANC’s conference in Mangaung next year, and Sports Minister Fikile Mbalula to replace Mantashe. Some Malema supporters also brandished printed posters with calls for Motlanthe in 2012.

This is set to present a new challenge for the ANC, after Mantashe last month put down his foot and declared the succession debate closed for now, following a decision of the party’s national executive committee. Party spokesperson Jackson Mthembu could not be reached for comment on Sunday. DM