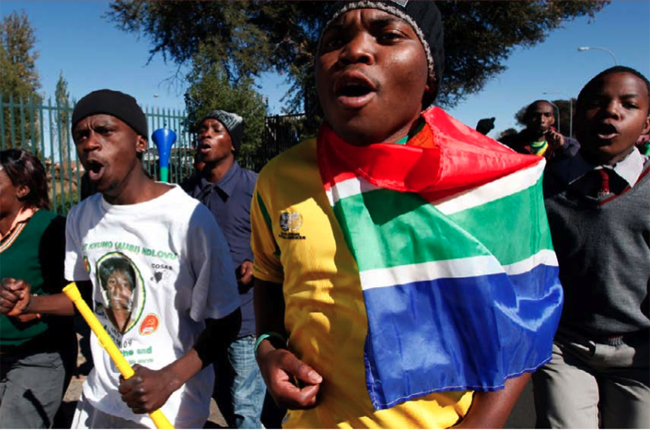 The DA Youth launched a campaign for a youth wage subsidy last week. PAUL BERKOWITZ investigates its policy and agrees with the diagnosis of the disease, but not with every aspect of the proposed cure.

On 25 August the Democratic Alliance, through its youth division, launched its campaign for a national youth wage subsidy.  The home site for the campaign is a slick affair. There’s a link to a Facebook petition that visitors can sign and a Twitter feed enables people to debate with DA Youth representatives. The faces of Tim Harris and Lindiwe Mazibuko, two of the DA’s rising stars, gaze back at you in their photogenic air-brushed glory.

The most effective element of the page is what I call the Clock of Lost Opportunities.  It’s a counter at the top of the page that ticks over every three-and-a-half minutes, representing the number of young South Africans who would have benefitted from a youth wage subsidy, had the subsidy been implemented from 1 April 2010.  The counter is reminiscent of the US federal debt clock hanging in Times Square and starkly represents the cost of not tackling the youth job crisis in South Africa. Hang around our page long enough, the message goes, and you’ll bear witness to another young person missing out on the benefits of the subsidy.

The full policy document contains the steak behind the sizzle (it’s recommended that you view it in Google docs, as the .pdf hasn’t been properly formatted). The document provides the history and background behind the youth wage subsidy debate in Parliament, a recap of just how dire the youth unemployment crisis is in South Africa (if you didn’t already know) and a lot of documentary evidence damning the obstructionist stance taken by the ANC’s alliance partners in the face of the subsidy proposal.

When it comes down to the rands and cents of the DA’s proposal, the message becomes a bit controversial. The DA’s own proposal is compared with the proposals by national treasury (a subsidy of up to R1,000 a person a month, targeted at workers aged between 18 and 29, transferred to employers, total cost to the fiscus of R5 billion over three years) and the group of Harvard economists (once-off grant to all 18 year olds, total value of the grant is R5 000, total cost to the fiscus of R3.75 billion a year). The DA proposes a variation on the Harvard proposal, where both companies and individuals employing young people can claim up to R300 a month in a rebate from the government for every young person they employ. The cost of the DA’s proposal is R5 billion a year, presumably because the subsidy would be extended to more people than under the Harvard group’s proposal.

The DA acknowledges that its proposal is the most expensive of the three, and that the fiscus is tight, but claims that fat can be trimmed by scrapping the SETAs and district municipalities and by tackling wasteful expenditure in government.

Here are my problems with the DA’s proposals: Firstly, the monthly subsidy of R300 the DA proposes is lower than that proposed by the Harvard group (about R417) and treasury’s current proposal (up to R1,000). There are costs to hiring new staff. Even if we assume that labour legislation would be relaxed or suspended in the case of new youth employees (a very, very big if) the subsidy for employers still needs to be big enough to incentivise them. The smaller the subsidy, the less likely it is to even cover the administrative costs of processing new workers.

Secondly, the DA’s proposal includes extending the subsidy to “individuals who hire new workers such as domestic workers, gardeners, child minders, care givers and drivers”.  One of the central assumptions behind any youth subsidy is that it will give valuable on-the-job skills and experience to young people who can then progress to more complex, better-paid jobs.  This is best done within formal work environments where monitoring and mentoring is part of the experience (or should be).  It is not suited to private households, where there seems to be very little professional development or job mobility.

This may be unfair, but this clause looks more like a subsidy to middle-class households and social welfare for unskilled labour than a genuine opportunity to provide skills transfer.  I do not doubt the DA has included this proposal in good faith, but in this game of politics, perceptions are very important.  If the party wants the buy-in of the public, the programme should speak to youth development and not look like the DA’s version of the expanded public works programme.

Lastly, the costing of the programme needs to be interrogated. Let me first acknowledge that it is difficult for the DA to propose spending cuts in other government departments without courting controversy, as the ANC pretty much controls the entire executive arm of government.  Still, by suggesting that the money be raised through the scrapping of SETAs or district municipalities, the DA opens itself up to criticism. It conflates its (relatively) uncontroversial subsidy with an attack on the departments of higher education and cooperative governance and traditional affairs.

The DA has opposed the SETAs and has been hammering the ANC for its profligate ways for some time now. It risks alienating potential supporters by drawing their focus to its ideological differences with the ANC, rather than emphasising that both parties support the subsidy.

The ANC’s alliance partners will fight a relaxation of labour legislation tooth and nail. Given this reality, a youth wage subsidy is the best available tool to tackle unemployment. The DA is right to champion this cause and its diagnosis of the problem is accurate. Its proposed solution could do with a bit of tweaking. DM