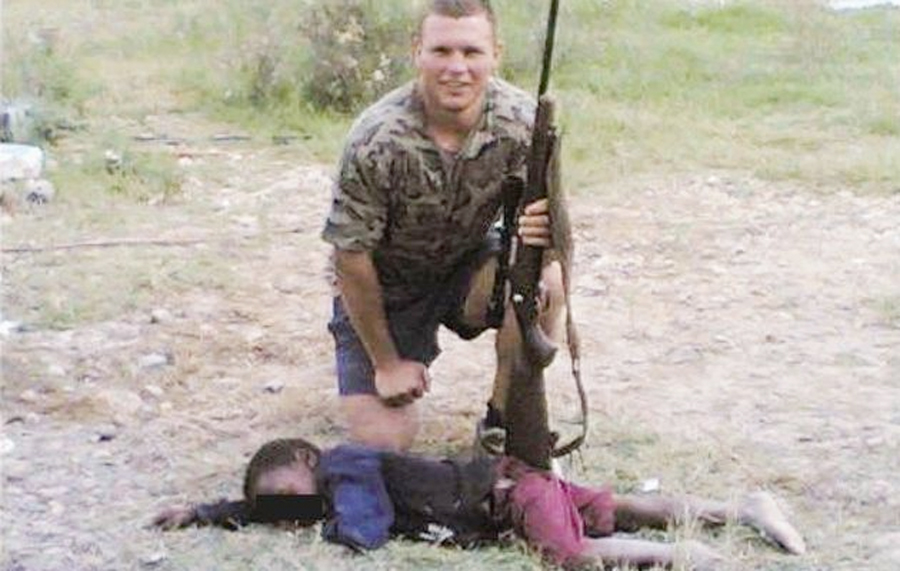 One more disclaimer: the Sunday Times didn’t actually say it was exclusive. But they treated it like it was and splashed the image – of a gun-toting racist using a black child as a hunting trophy – all over their front page as if it was breaking news. So that’s close enough…

In case you missed it, the Sunday Times proudly reported how its discovery of the shocking photograph on a Facebook site had prompted the involvement of two Cabinet ministers: the minister of social development got seriously outspoken about children’s rights, and the minister of police initiated a probe by the Hawks (you would have thought they were too busy chasing Julius and the arms deal).

South Africa’s biggest selling newspaper proudly told its readers: “The [Hawks] investigation was sparked when the Sunday Times presented the link to the site to the authorities”.

But the common denominator in most conversations about the Sunday Times on Twitter yesterday afternoon – and not just among people in the media space – was the same: “Why make such a fuss over a photo that’s been all over the place, and was taken and published more than three years ago? And why pretend it’s new when it’s clearly several years old?”

Just how old the image may be was disclosed by 702’s Mandy Weiner, who tweeted yesterday afternoon: “In May 2008, EWN exposed the picture which is on the front page of the SunTimes on a FB group called ‘Ek laaik nie ‘n houtkop nie so what’.”

The Facebook group she referred to was set up by students at North West University, and one student was expelled as a result of the 702 investigation (maybe the Hawks should ask Weiner for the student’s phone number so they can pick him up – that’ll make for the quickest Hawks investigation in history).

In a later tweet, Weiner said research at the time had indicated that the photo might have been a hoax.

My own exclusive research yesterday afternoon (ok, I found a whole lot of tweets on the topic) shows that the Mail and Guardian’s Yolandi Groenewald did an extensive expose of right-wing social media – including the North West University student website which posted the Sunday Times’ “exclusive” photograph this week – on 12 October 2008.

I can almost-exclusively reveal that Beeld took the matter even further on 20 October 2008 with a lengthy discussion article on what the newspaper termed “new media racism” (thanks to James Myburgh for tweeting that, and for providing the Beeld link). The article included detailed comment from the head of the Human Rights Commission at the time, Jody Kollapen, and reminders of how the “Reitz 4” from Free State University had felt compelled to showcase their racism in a video rather than keeping it to themselves.

In a weird twist, the SMS Crime Line initiated by Weiner’s colleague at 702, Yusuf Abramjee, was tweeting the following at the time Weiner was blowing the whistle on the non-exclusivity: “Crime Line – Wanted: Alleged Facebook racist. SMS your tip-off to 32211”.

But when it does it, it’s not just what it does – it’s also about how it does it. And in many cases, it’s as much about treatment – where a story is placed, and how it is used – as it is about content.

As part of their preparation for publication of the photograph yesterday, the Sunday Times clearly went to elaborate lengths to speak to everyone and their uncle about the mindset of the gun-toting cretin who posed for the picture, including the two ministers referred to above, a number of children’s rights groups, lawyers and the police.

But they were unable to “uncover” the fact that the photo was more than three years old, had been published on websites before, and was believed by a reporter who covered the issue at the time to probably be a fake.

Why not? Or did they know, and choose to ignore it in the interests of manufacturing a “splash” (and avoiding having to focus on Julius for the gazillionth week in succession)?

And if, as I hear from at least ten anonymous sources (that’s what the media say when they’ve asked the same make-believe person the same question ten times), there was disquiet among Sunday Times staff about the treatment of the story and photograph, why did the newspaper go ahead and splash?

One wonders how the Avusa shareholders are feeling about their flagship title this morning. They are in the thick of a due diligence exercise with potential buyers Capitau (a due diligence is when someone wants to buy part of your company, spends a lot of time going through your books looking at the viability of your business, and then makes you an offer). And the last thing the current shareholders want is for the Sunday Times to be taking it on the chin in public, week after week – not to mention the trouble that its sister newspaper, the Sowetan has found itself in – when it’s trying to convince Capitau it’s an asset worth buying.

Put yourself in the shoes of an Avusa board member: There was the Eric Miyeni debacle, clearly the outcome of bad editorial decision-making at the Sowetan, preceded by the Kuli Roberts and David Bullard balls-ups.

More recently, there was the Sunday Times’ R1 billion Democratic Alliance communications tender, where some poor decision-making (and, some say, seriously poor editing and rewriting by those at the top) resulted in something of a front-page climb-down.

And now the exclusive racist Facebook photo that’s far from exclusive. Or new. Or, by all accounts, real.

No doubt some of the editorial decision-makers will fall back on their trusted throwaway line that “it’s not news until it’s in the Sunday Times”, and pat themselves on the back for putting the spotlight on the new Facebook host of the three-year-old racist photograph. Yada Yada.

But that argument apparently (now there’s another useful journalistic word) doesn’t wash anymore with the group’s shareholders and management – not when the Sunday Independent is breaking better stories two weeks out of four, and when City Press has clearly taken over as South Africa’s leading investigative Sunday newspaper.

The Avusa board has seemingly (that’s journalist-speak for “I think”) always held the view that it doesn’t involve itself in editorial matters. Whether that was ever true, or is true now, remains to be seen.

But I understand (just don’t ask me why) some of its members are arguing that once editorial quality issues and credibility begin to impact on the value of the Sunday Times brand – in real terms, on the value of the Avusa brand and the Avusa share-price – then an intervention may be necessary.

And that’s precisely what is happening now.

As a result, the shareholders are becoming increasingly restless at the string of embarrassments and the impact on the value of their assets, and are calling for an intervention or two.

Breaking news soon: Regime change at Avusa titles. Now that will be an exclusive worth reading – whether it’s exclusive or not. DM

PS: News just in: Late last night, some serious investigation (and a bit more help from Twitter and James Myburgh) revealed that details of the racist photo had also been published in 2008 by, of all people, The Times — the Sunday Times’ sister newspaper. At the time (7 October 2008) it described the photo as follows: “… a picture of a young white man holding a gun while standing over a young black boy lying on the ground”. Chris Vick is a spindoctor who has been active in media and politics (and some of the murkier spaces in between) for the past 17  years, including seven years in the government communications environment.  He was special advisor to Tokyo Sexwale for the last two years and now runs Black, a communications and lobbying consultancy. His email address is [email protected], Twitter (@chrisvick3) and on Facebook (chris vick).