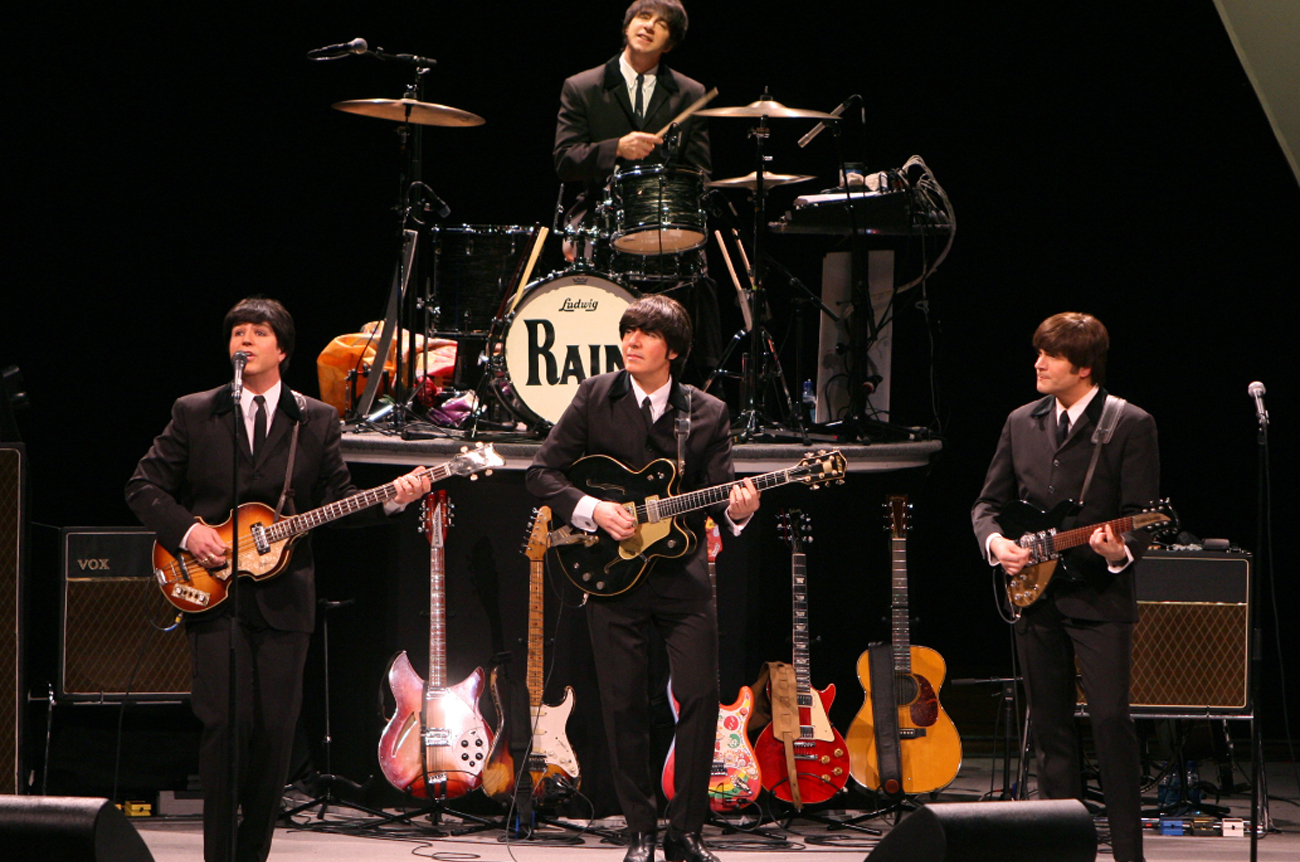 Two things The Beatles had by the bucketloads were character and thick Liverpudlian accents. Take those away and you’re left with four men singing some excellent songs and sporting a range of wacky outfits, but lacking the charm and charisma that helped make the Fab Four so memorable. By LESLEY STONES.

The result is “Rain – A Tribute to The Beatles”. The musicians on stage work hard, but fail to achieve much rapport with the audience. Instead, the early scenes set in a TV studio with flashing “clap now” signs are followed by the band urging us to clap, sing, stand and dance long before any party mood has crept across the audience.

For me the greatest flaw is the show is so utterly America. That explains the dodgy mangled accents, yet it also jars to see these British icons against an American backdrop. The show begins with film clips from 1964 and ’65 showing their arrival in America when they played the “Ed Sullivan Show” and staged a massive concert in Shea Stadium. Large panels at the side and behind the band are used well to add to the atmosphere by showing the events of the time. They’re particularly effective in the shorts breaks when the band changes for the next era, with amusing adverts interspersed with news reels taking us a few years forward.

But all the clips are of events unfolding in America. Maybe I’m the only one who found that annoyingly incongruous, but if you’re going to impersonate a band then at least get the setting right too. “Rain” was running on Broadway before coming to Johannesburg, where it may draw an audience because South Africa never had the real thing. But I’d love to see the audience reaction if it ever makes it to England.

Musically the performers are great, and their singing is spot on, so you’re seeing Beatles’ songs performed in a very authentic way. They look the part too, with wigs and costumes perfectly capturing their evolution through various styles. At first you’re waiting for the individual characters to emerge, but they never really do. There’s no sharp, cynical wit to make the John character John Lennon, nothing that gives Ringo his wackiness, makes George the enigmatic one or brings Paul to the fore as the guy you weren’t really sure you liked.

Oddly none of the performers is named in the programme, although each gets a brief name-check at the end. Surely not because we’re suppose to almost forget this is not the genuine item? Anyway, the mystery men are great musicians and obviously try hard – probably a bit too hard, if anything.

The Beatles wrote so many brilliant songs that no single show could hope to give you all your favourites. It starts with those catchy numbers like “I Want To Hold Your Hand” and later puts a heavy emphasis on the psychedelic era, which wasn’t the period that made them so enduring. There are a few unknown songs too, which The Beatles recorded, but never performed for an audience. That was a nice touch to expand our appreciation of their music.

It’s all put together very well and hopefully less pedantic fans will find it a thrill. But without any of the dry humoured banter you’d expect and too little interaction between the band members it all feels rather flat.

The moment I’ll remember is where Mac Ruffing as Paul quietly begins to sing “I’m not half the man I used to be.” Which sums up the whole thing perfectly. DM “Rain – A Tribute to The Beatles” runs at Montecasino theatre until 4 September.

'Another Earth' makes for splendid viewing

All good things are not what they seem