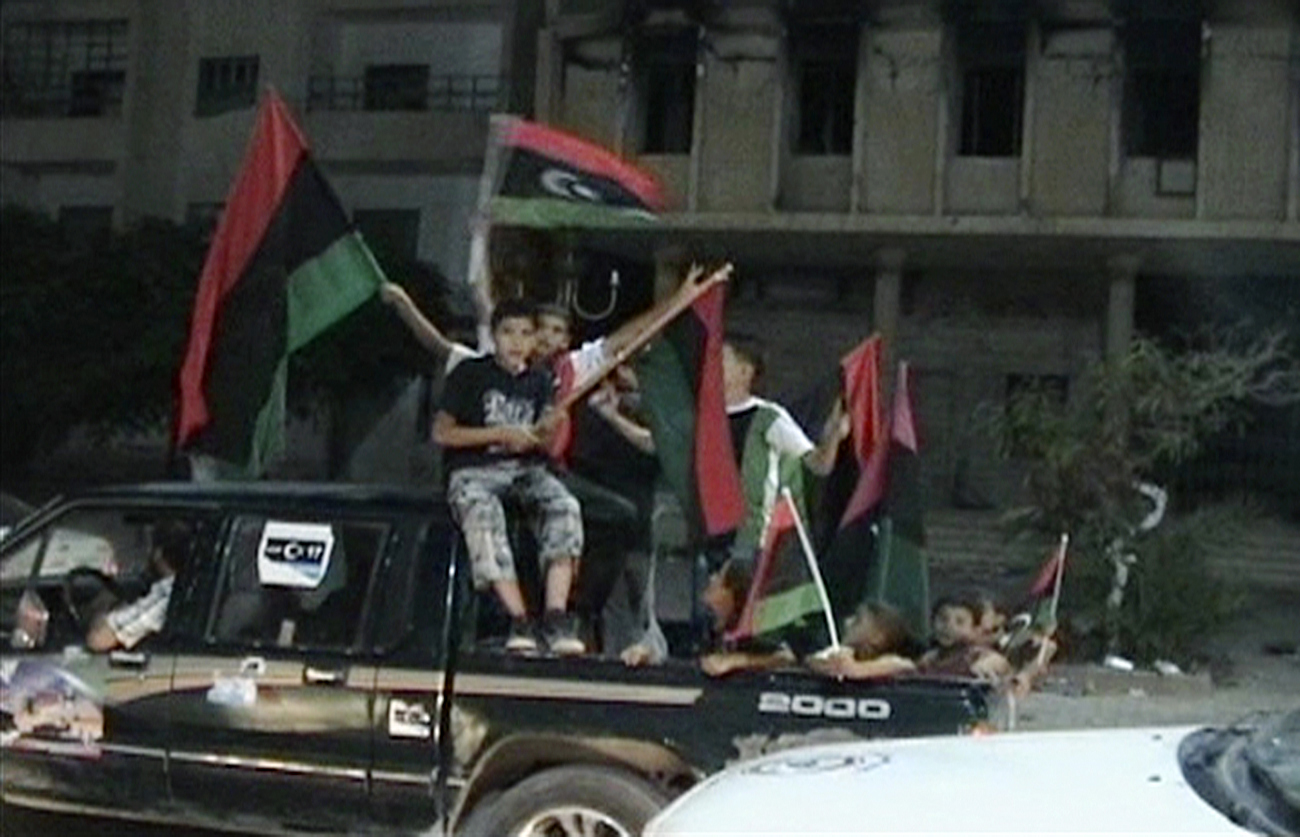 It took six months and nearly 30,000 lives, but Gaddafi’s regime finally collapsed as the rebels stormed victoriously into the heart of Tripoli on Sunday night. The battle’s not over yet, with pockets of Gaddafi resistance in the capital and the fate of Brother Leader himself unknown, but the war is won. Libya belongs to the rebels now, and the world waits to see what they’re going to do with it. By SIMON ALLISON.

The rebel advance on Tripoli, when it came, was swift. As the sun set over Tripoli on Sunday night, and the city’s residents sat to break the Ramadan fast, it began; a symphony of machine gun fire and explosions heralded the collapse of the regime which has ruled Libya for nearly half a century. Despite Gaddafi’s threats and bluster, despite the crack team of 65,000 soldiers he claimed were ready to defend him, the rebels secured most of the capital within hours. It’s unclear at this point what the body count was, but it’s likely to have been high. The previous night’s advance claimed over 300 lives and some estimates put the death toll for the whole war as high as 30,000.

And in the course of Sunday night, a number of remarkable, unthinkable things happened. Just after midnight the rebels captured Green Square, symbolic centre of the Libyan state, and it filled with thousands of cheering rebels and Tripolitans waving the old, pre-Gaddafi flag, which will become the new, post-Gaddafi flag. The rebels overpowered one of the capital’s largest military bases, immediately releasing some 5,000 people imprisoned by the regime and redistributing weapons from the armoury. They also captured two of Gaddafi’s sons, with Saif al-Islam (Gaddafi’s favourite) under direct rebel control and Muhumad Gaddafi under house arrest. Saif is likely to be transferred to the International Criminal Court in the Hague, where he’ll be prosecuted for crimes against humanity, and Muhumud spoke to Al Jazeera immediately after his arrest. “In the interview, he took an apologetic tone and said it was a lack of wisdom that caused the revolution and crisis in Libya,” the channel said.

Even President Obama came to the party as the US officially recognised the rebel government: “The momentum against the Gaddafi regime has reached a tipping point,” he said. “Tripoli is slipping from the grasp of a tyrant. The Gaddafi regime is showing signs of collapsing. The people of Libya are showing that the universal pursuit of dignity and freedom is far stronger than the iron fist of a dictator.”

But for all Libya’s celebrations, the war’s not completely over yet. Pro-Gaddafi forces remain in control of some 15%-20% of Tripoli, most importantly the heavily-fortified presidential complex of Bab al-Aziziya, and this may take some time to fall. The whereabouts of Gaddafi himself are unknown, with completely unsubstatiated rumours alleging that he’s fled to Venezuela (which would be tricky given the no-fly zone enforced over Libyan skies), or that he’s already been killed.

The most intriguing mystery of the night were the unconfirmed reports that two South African planes were spotted on the tarmac at Tripoli airport. These reports were accompanied by rumours that the African Union was preparing an exit strategy for Gaddafi, with Angola and Zimbabwe mooted as potential exile destinations. Mohamed Dangor, South Africa’s ambassador to Libya, denied any knowledge of this. Speaking from Johannesburg, he said: “I have no knowledge of any South African planes in Tripoli … but Nato should know, since they control the airport and no plane can land without their permission.”

While the rebels may have won the military battle, the political struggles ahead look just as daunting. The rebels are bound together by a hatred of Gaddafi, and with his fall comes the loss of this unifying emotion. There is little clear thinking about exactly what a post-Gaddafi Libya would look like, and how it would function. It doesn’t help that the rebels themselves are in political disarray, with the National Transitional Council – the body that’s been recognised as Libya’s official government by at least 30 countries – operating without a cabinet after the last cabinet was unilaterally dismisssed by chairman Mustafa Abdul Jalil, who blamed them for not investigating last month’s murder of the rebels’ top army commander.

One positive decision the rebels have already made is avoid the mistake made by the USA in Iraq and incorporate some of Gaddafi’s armed forces into the security apparatus of the new state. Thousands of angry, unemployed and disenfranchised soldiers isn’t a good recipe for peace, and the faster their loyalty can be co-opted the better for Libya’s stability.

But for now, Libya’s not worrying about the the politics and the problems. Gaddafi was Africa’s longest-serving dictator – a dubious distinction – and most of the rebels have never known another leader. Their victory, for now, represents the triumph of the people over authoritarianism and oppression, and the people are entitled to enjoy the fruits of their sacrifices. DM