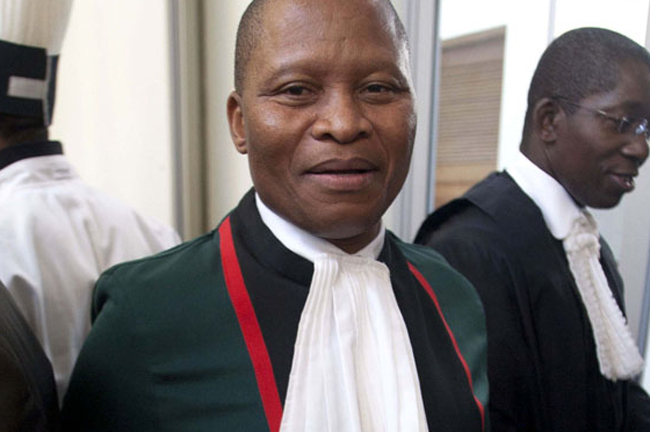 If there hadn't been an announcement about anyone else being disciplined just before the weekend, we’d probably all have been concentrating on the machinations behind the appointment process of the Chief Justice, which is turning into a huge political story.  The Judicial Service Commission met over the weekend, and decided on its way forward. And the way forward is going to be slower than President Jacob Zuma would have liked, but he’ll probably have to accept it. By STEPHEN GROOTES.

Deputy Chief Justice Dikgang Moseneke became the second top judge to do the right thing in the last month or so, by publicly stating that, as acting chair of the JSC, “it is proper and necessary that I banish the elephant out of the room. That elephant is whether I am available to be a nominee or contender or contestant for the position of Chief Justice?” He then went on to say that “I am neither a hopeful, nor a nominee or a contender, present or future, for the position of Chief Justice.”

It’s a statement that will encourage and thrill both his supporters and detractors. It was very mature, and the only way this entire process was going to move forward. By making this statement, Moseneke is able to chair the JSC through the next couple of meetings, and to remove all the suspicion from those who that think he’s up to something. Some may try to read into it that he’s cocking a snook, or some other such gesture, towards Zuma. While that always could be the case, it doesn’t seem like it. It’s the comment of a man who some time ago made his peace with the fact he was never going to have the top job. And perhaps, there’s a nice international opportunity that could turn up in 2016 or so. But still, it must have hurt to make such a statement.

He’s not the only person hurting through this entire process at the moment. On Friday, EWN uncovered an email sent by Advocate Dumisa Ntsebeza, a member of the JSC, and also a leader of Advocates for Transformation (AFT). It was sent, unwisely, it turned out, to the entire executive committee of AFT. In the email, he suggested that despite the fact his own personal preference would be to back Moseneke for the job of Chief Justice, AFT should not be part of attacks on “another Black judge” and should thus publicly back Zuma’s choice of Mogoeng. As a result, the Institute for Public Accountability in Southern Africa says he should be sacked from the JSC because he’s not neutral.

Reading through, it’s indeed written like an email cobbled together at 2.52am. Foolish. It’s also vintage Ntsebeza, several thoughts all put down together. What’s always so interesting about Ntsebeza, is that he does see both sides of an issue. Not everyone can do that, even those who are supposed to by law.

While Zuma is likely to keep Ntsebeza on, the point is that this brings to three the number of people whose reputations are being injured by the President’s actions in this saga. If Zuma had just accepted the fact that Sandile Ngcobo’s time was up, and appointed a person held in high esteem, none of this would have happened. Essentially, this is what happens when the man at the top does the wrong thing.

That’s the human side of all this. Now to the legalities and the law.

The JSC held a pretty long meeting on Saturday, lasting six or so hours. They decided they’re not going to ask for more nominations, and that Mogoeng will have to submit to a public hearing. That was pretty predictable. While many, including some of those on the commission (bear in mind, opposition parties sit on it) might have wanted another nomination, they would be in pretty dicey political territory to ask for one. It doesn’t seem like they could have forced the issue constitutionally speaking, and so there was probably nothing to be gained by it.

However, there is a spanner that has been thrown in the works. It could be a size two, or a size 16. The JSC says it cannot interview Mogoeng before 3 September. That’s a full ten days after Zuma’s deadline for the consultation period to be over. The JSC’s writing to Zuma asking for an extension. Mac Maharaj, I’m sure, will be mindful enough to recommend to the President that he grants it. If he doesn’t, and there’s no public interview, Freedom Under Law, and some others, could be very much in the mood for a little round of litigation. Again. Already the Freedom Front Plus has indicated it’s seeking a legal opinion on the way Zuma made his nomination public. Although, as we’ve indicated before, Zuma seems to be on safe legal ground here. But it’s best to just let Moseneke run the show, in as much as there’s a show to run, for another couple of weeks.

One question has to be asked though. The JSC, as it’s currently constituted, has a heavy preponderance of people who might have been thought to back Zuma’s choice. There are his four nominees, the Justice Minister Jeff Radebe and some ANC people. If Radebe and co. had thought they had the votes to push through a decision to not hold a public interview, would they have taken it? No doubt, they’d say “of course not, we’re proper democrats who follow the law”. But it’s a question worth asking nevertheless.

As this saga goes on, people are going to ask what damage it’s all doing to the justice system, the complex web of relationships, friendships and colleague-ships that forms a network of people who have to make the thing work. There will be much gnashing of teeth about how this saga has damaged the legal matrix, making it harder for people to actually work with each other.

Much of that will be true. But at the same time, this could also turn out to be the first healing the system undergoes after the Judge John Hlophe affair. At the time, you could virtually determine whether a lawyer would back Hlophe or the Constitutional Court (which had complained that he had tried to influence two of its judges in cases relating to the then Mr Zuma) by their race. This time it’s been quite different. Advocates for Transformation appears to be thinking that Moseneke would have been a better choice, and it’s not been too scared this time about letting that information slip into the public domain. The silver lining here could be that many decent people in the profession are basically accepting, with pretty good grace, the fact that Zuma has the right to appoint Mogoeng.

Hopefully, this will help Mogoeng get off to the right start as Chief Justice. But before that, he’s got some questions to answer in that public hearing – which of course won’t be as exciting as that other hearing, chaired by Derek Hanekom, to be held behind closed doors. DM