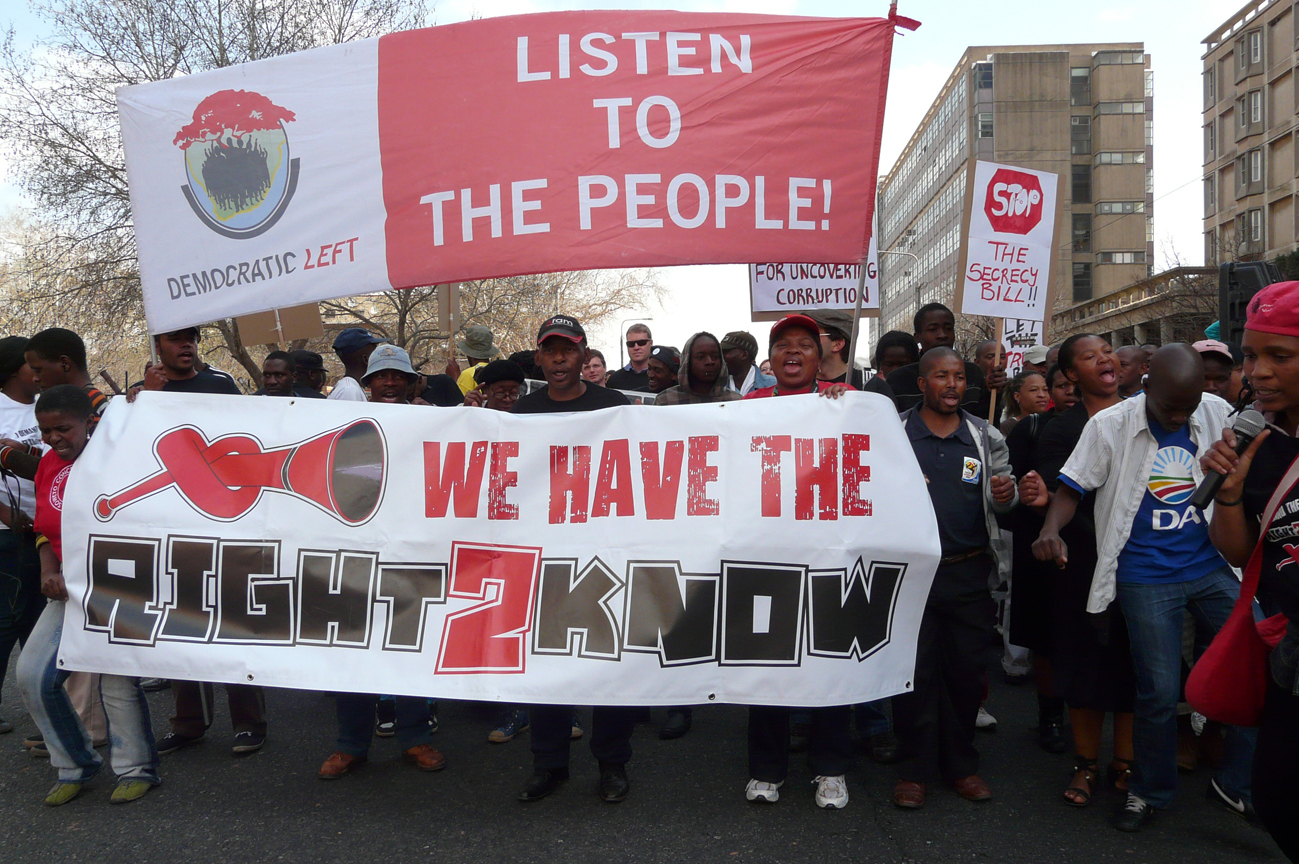 The Right 2 Know Campaign first organised a march to the Constitutional Court in October last year. On Saturday, a second rally and march to the highest court in the land showed that, despite some concessions in the latest drafting of the proposed Protection of Information bill, the fight to protect access to information and freedom of expression is far from over. By THERESA MALLINSON.

In late June, opponents of the proposed Protection of Information bill welcomed certain concessions, namely that only state security services would have the ability to classify information (although other state organs could apply to opt in), the inclusion of an independent appeals mechanism; and the scrapping of mandatory prison sentences for releasing state secrets.

Given these concessions, why is the Right 2 Know campaign still taking to the streets to protest the bill? The simple answer is that several clauses of the bill remain of huge concern. As Gauteng co-ordinator of the Right 2 Know campaign, Dale McKinley put it: “(This) very draconian piece of legislation attacks many fundamental rights – (the) right to access to information and freedom of expression”.

McKinley was the first in an impressive line-up of speakers at Wits Great Hall on Saturday, where he outlined the five key demands of the campaign regarding the bill. These are:

Next up was Cosatu president Sdumo Dlamini. The trade union federation has been heavily critical of the bill, and Dlamini reiterated this stance. “As Cosatu we do reject the POIB in its current form. We’ve come here to make the statement that no democracy can flourish under the veil of secrecy,” Dlamini said. “It cannot be accepted that the South African people are kept uninformed about how their own country is being governed.”

Citing concerns about how the bill would affect whistleblowers, particularly trade union members, Dlamini echoed McKinley’s call for a public-interest-defence clause to be included. He added: “What is a priority to us and is a threat to our country is not the protection of information, but is the protection of people from poverty, unemployment, and inequality.”

Dlamini was followed by the grand dame of letters, Nadine Gordimer. She largely gave a reprise of her and Andre Brink’s letter to the presidency protesting the bill, which was delivered in July. Gordimer was scathing of the reception that this letter received. “Not even an acknowledgement was received from the presidential office… Into the trash can,” she said. It was former minister of intelligence Ronnie Kasrils who really stirred up the hall, with the soundbite of the day. “(The Bill)… is turning into a Frankensteinian monster, a dog’s breakfast of toxic gruel,” he said. It was Kasrils, in his former cabinet post, who initially saw the need for the apartheid-era 1982 Protection of Information Act to be updated. His old friend, the late Kader Asmal, said to him: “Get very good drafters, and make sure you go for very thorough consultation with the public.” The task team Kasrils set up soon realised that the public-interest defence needed to be included as a crucial part of the bill.

But when Kasrils left government in 2008, this task team was disbanded. And he is sharply critical of the shape the bill has taken since. “This new bill has very little in common (with my bill) because the policy aspects of that previous bill (were) based thoroughly in our Constitution and Bill of Rights,” he said. Kasrils had harsh words for the parliamentary committee that is currently drafting the bill. “All of those in the committee dealing with the bill, from every single party, are all woefully failing. (They’re) leaving out the major policy positions of the previous bill. (It’s) cut and paste, (they) don’t know what they’re talking about.”

Speaking again of this redrafting process later on in his talk, Kasrils added: “They’re cannibalising aspects of the 1982 bill, and my bill, and now aspects of (international law), which is what’s turning it into the Frankensteinian monster, a dog’s breakfast of toxic gruel.” Considering he was berating the committee’s cut-and-paste attitude, we think Kasril’s mixed metaphors deserve to be forgiven – making a point in themselves.

Kasril’s rousing speech was a tough act to follow, but Mail & Guardian editor Nic Dawes was equal to the task. He began by pointing out that: “In many ways we shouldn’t really have to be here today on a beautiful morning in summer”. This because the Constitution, which protects access to information and freedom of expression, among other human rights, was decided on 15 years ago. “We shouldn’t have to be here at all, but we will be here,” Dawes said. “[W]e’re going to the Constitution Court to show where you will be if you pass this bill. And in-between we’ll be in the streets, and we’ll continue to be in the streets.”

Franz Kruger ended the round of speeches by focusing on the manner in which the ANC has hijacked the notion of “transformation”. He claimed the party was using a superficial agenda of transformation to deflect criticism, while real transformation was not taking place.

The actual march from Wits to the Constitutional Court attracted some attention from passers-by, but the streets of Johannesburg were largely lifeless on Saturday afternoon. While Kasrils had spoken of a strong turn-out for the rally, this translated into about 500 people listening in the Great Hall, and about 300 marchers, according to McKinley. This was disappointing, considering Right 2 Know claims the support of more than 400 NGOs, and more than 20,000 individuals. But supporting a cause with your signature is very different to getting off your couch on a Saturday afternoon to make your presence count.

Although McKinley noted that the fight for freedom of expression and access to information “cuts across class, cuts across ideological division, (and) cuts across usual divisions in South African society”, it was largely members of community organisations, whose attendance was organised by the Right 2 Know campaign, who felt strongly enough about the cause to come out and march, and revolutionary songs added some impetus to the trek up Constitutional Hill.

The ad hoc parliamentary committee on the POIB is set to meet again on Monday, and throughout the week. Unless it makes some significant changes to the proposed bill, it seems certain that next time it will be lawyers – not protesters – taking the matter up at the Constitutional Court. DM