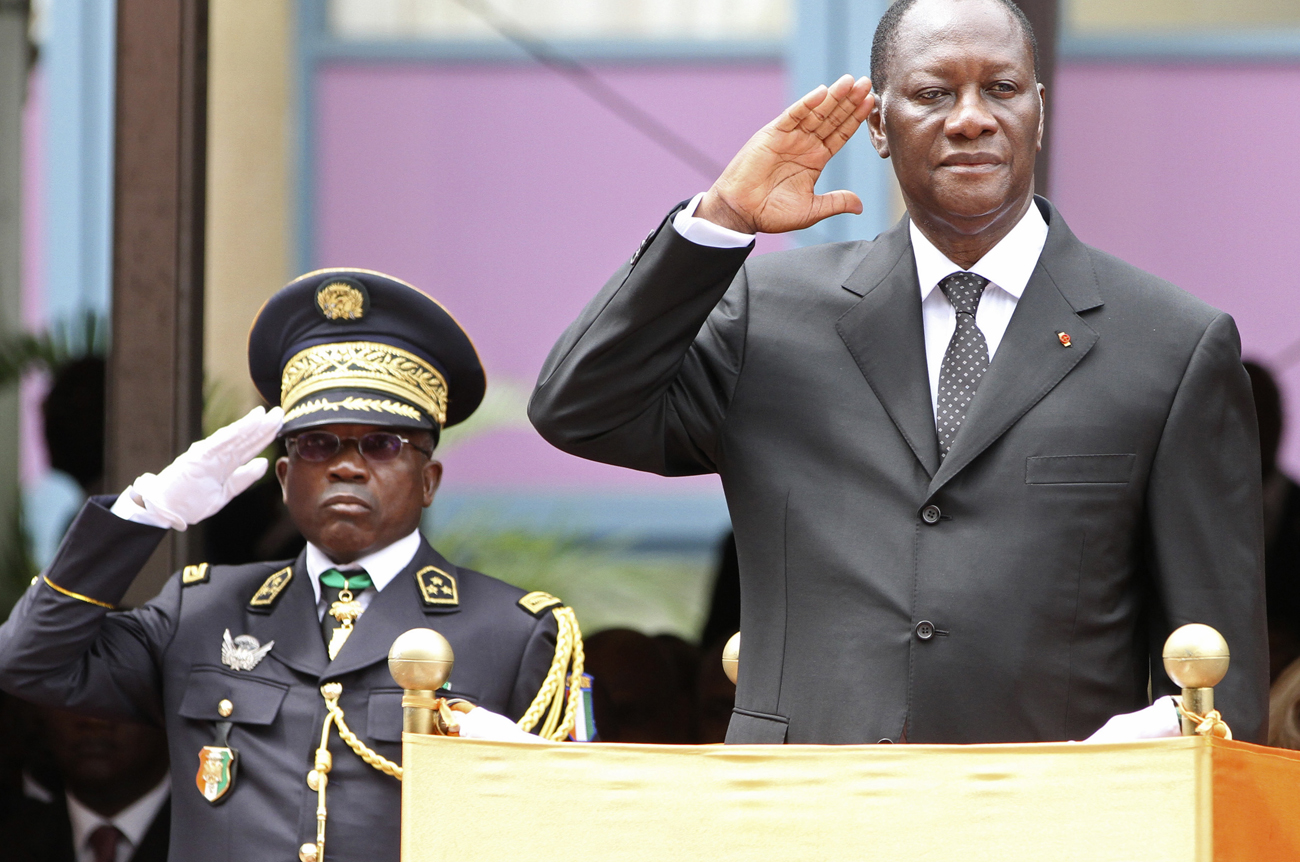 It’s been four months to the day since Laurent Gbagbo emerged from his presidential bunker, stripped of power, stripped of dignity, his previously resplendent military uniform reduced to a dirty white vest. Although it took months, he comprehensively lost the battle of wills – and guns – between him and his old enemy, Alassane Ouattara. And now that Ouattara’s in charge, he’s doing what it takes to make sure he stays there. By SIMON ALLISON.

Alassane Ouattara, made to wait nearly six months to claim the electoral victory in Cote d’Ivoire that every international observer said was his, can’t be blamed for enjoying himself now. Basking in the glow of international approval, in his few months in power he’s made all the right noises and said all the right things. He’s gained the most plaudits from his charming rhetoric on justice and reconciliation, pledging that whoever committed atrocities should be punished, no matter what side they fought on, and that his government would be for all citizens, not just his supporters. “I am the president of all Ivoirians, without distinction of race, religion or region,” Ouattara said. On another occasion, he asked his people to “refrain from any act of revenge…Cote d’Ivoire is one and indivisible.”

He’s vowed to set-up a South African-style Truth and Reconciliation Commission, and got advice on the subject from the chairman of the original one, Archbishop Desmond Tutu. He’s been on a state visit to America, where he was welcomed by President Obama and UN Secretary General Ban Ki-Moon. He’s resumed cocoa exports – halted during the violence to prevent money from getting to Gbagbo – letting the economy return to some sense of normality, helped by the fact that the temporary shortage of cocoa had sent prices skyrocketing. He’s had an inauguration – memorably described by a Nigerian newspaper as being characterised by “cries of joy and the emergence of a new dawn” – which was attended by a host of world leaders, including France’s Nicolas Sarkozy. Sarkozy was one of the driving forces behind the international response which helped Ouattara prevail over Gbagbo’s intransigence, and no doubt exerts significant influence in the new government.

But behind the rhetoric and the fancy ceremonies, Ouattara has been getting on with the serious business of consolidating his power – in a decidedly less feel-good manner. Gbagbo and his wife remain detained in different cities in the north, Ouattara’s heartland; incidentally not the first time Ouattara’s put Gbagbo in jail, having done so before in 1992. Charges haven’t been brought against them yet, but there’s no doubt that their time will come. The president of the constitutional commission, the body that gave Gbagbo a fig leaf of legitimacy by declaring the election in Gbagbo’s favour, was sacked, with Ouattara putting his own man in charge.

He’s also been making sure the army marches to his drum alone, putting the commander of the Nouvelle Force Guillaume Soro, in charge of the army as well as the post of Prime Minister. The Nouvelle Force was the foundation of the armed group which fought Gbagbo’s troops so viciously. A number of other prominent commanders from the militia have been given army positions, including some that have been fingered by Human Rights Watch as responsible for some of the worst atrocities committed during the fighting. One commander, which Gbagbo had put in charge of a key northern town, has been under UN sanctions since 2006 for gross violations of human rights including recruiting child soldiers, sexual abuse and extrajudicial killings. And speaking of extrajudicial killings, Amnesty International has alleged that security forces linked to Ouattara continued as late as May to execute reprisal attacks on Gbagbo supporters, with Ouattara failing to condemn them.

Ouattara has also taken action against pro-Gbagbo journalists. Reporters Without Borders described journalists supportive of the former president as “being hounded by the new authorities”, with premises attacked, prominent personalities relieved from their jobs on state broadcasters, the detention of some journalists and even the death of one reporter under suspicious circumstances.

With the army, the media, and the constitutional commission taken care of, Ouattara is now free to go after the big guns. On Wednesday, Gbagbo’s son, his chief of party, and 10 other senior figures were officially charged with violating state security for their role in the post-election violence, and moved from house arrest to a more formal detention facility.

Gbagbo’s lawyer wasn’t happy with these latest developments. “What we deplore is the bizarre nature of this… At the same time they talk about reconciliation they go after those who were close to Gbagbo and they’re attacked simply for being linked to Gbagbo,” he said. While perhaps a little biased, he does make a valid point. So far, no one linked with Ouattara has been charged with anything, despite the well-documented human rights violations committed by forces acting in his name.

But that won’t be worrying Ouattara, who will be enjoying the fruits of the power he worked so hard  to obtain. But he should be wary of overstepping the mark. After all, Gbagbo managed to turn things round once before, going from prison cell under Ouattara’s prime ministership to the presidential palace a few years later. While unlikely he’ll achieve the same feat again, he symbolises powerful forces which might be better assuaged than angered. DM