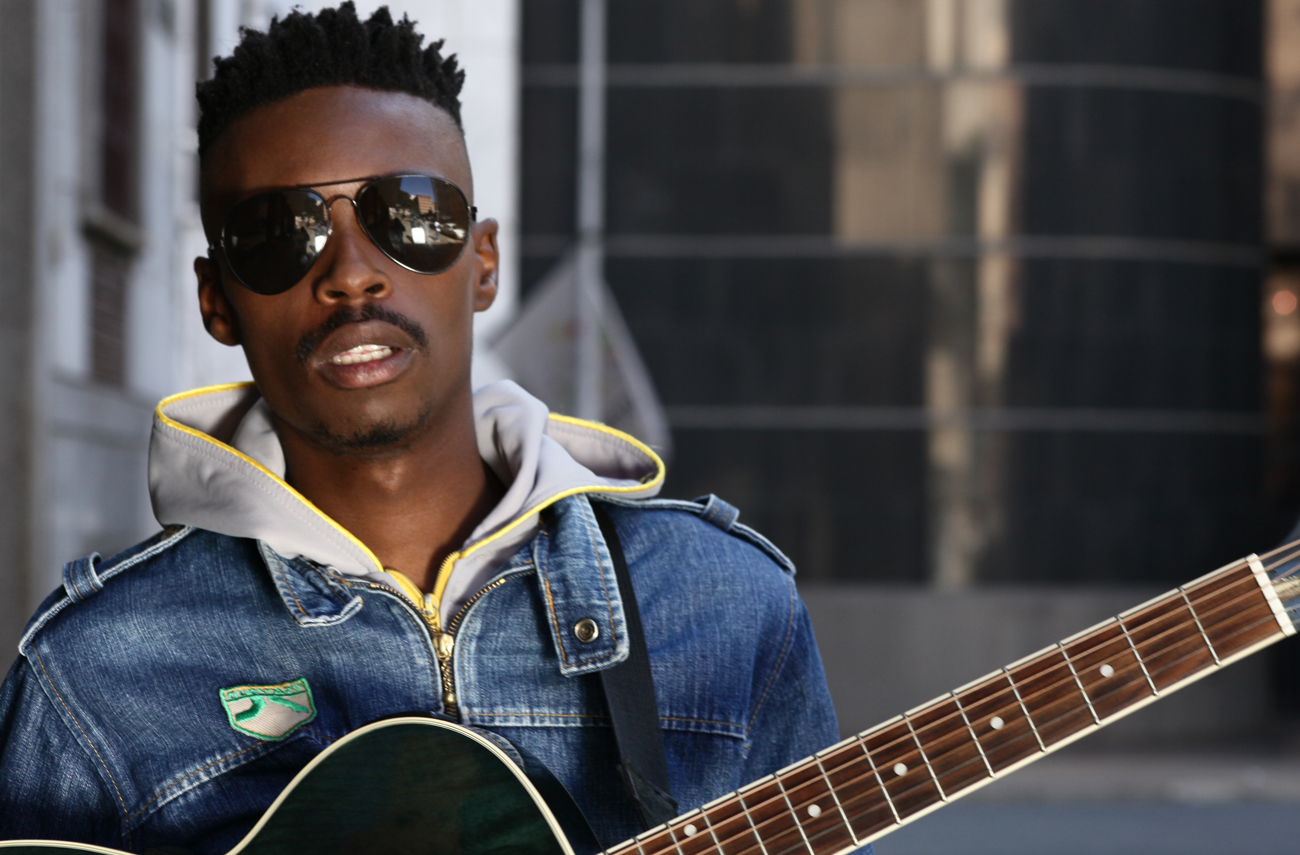 Singer-songwriter Bongeziwe Mabandla's Afro-folk sound is starting to attract international attention – he's one of ten finalists in the Radio France Internationale Discoveries Awards. And with his debut album, “Umlilo” (fire), due to be released in September, home fans have something to look forward to as well. By THERESA MALLINSON.

You may not have heard of it before, but the RFI Prix Découvertes (Discoveries Award) is a pretty big deal in African and, to a lesser extent, Caribbean music. The competition, a project of Radio France Internationale, has been going for close to three decades, and most often been won by artists from Francophone African countries. Past winners include Amadou et Mariam from Mali (1982) and Zimbabwe’s Chiwoniso (1998). The prize has never been won by a South African.

Bongeziwe Mabandla, who grew up in Eastern Cape and now lives in Joburg, is hoping to change that. His music label, 340ml Music, entered him into the competition earlier this year, and now he’s one of ten finalists for 2011. The others are Afrikkanitha (Angola); Blakkayo (Mauritius); Cheikh MC (The Comoros); Elie Kamano (Guinea); Metzo Djatah (Senegal); Mao Otayeck (Côte d’Ivoire); Sia Tolno (Guinea); and Wanlove the Kubolor (Ghana). Yes, you counted correctly: that only adds up to nine. The finalists are being announced one each day, and the name of the final finalist has yet to be released.

The prize brings €10,000, promotional backing, a concert in Paris and an African city. “(Being a finalist is) actually very nerve-wracking, ‘cause I got called and they were really excited, and (said): ‘You’re in the top 10!’. So I’m very honoured to be nominated… I heard some (of) the musicians from this year are really amazing, and I’m the only one nominated in South Africa; it’s an amazing thing,” Mabandla told Daily Maverick over coffee in Melville.

It’s appropriate that we met there, as it’s Melville were Mabandla first met Paulo Chibanga, when he bumped into him at a corner cafe buying bread. Chibanga is the drummer from Mozambican band 340ml, and he took the young musician under his wing. “I met Chibanga from 340ml. After school I was a bit like: ‘I don’t know what to do’. I’d been acting a bit, like on ‘Generations’, but it wasn’t really artistic for me,” Mabandla confessed. “So I told him I play guitar, and I have some songs I’d love to record. We met later, and we recorded, and that’s how I came to be a musician that’s playing (gigs). I was ‘discovered’.”

The band, 340ml, has its own music company called, simply enough, 340ml Music. Along with Levi Pon the Mic, Mabandla is one of only two artists signed to the label. “It’s nice to be at a label like mine because they’re all artists. I can just come and say this is how I want to do it for artistic reasons, and they pretty much follow that,” says Mabandla. “They do dub and that type of stuff, (but) I want to be acoustic and more soulful.”

340ml Music released Mabandla’s debut EP, “Umlilo” (meaning “fire”), in 2008 and his album of the same name is due for release in September. “The title of the album is actually a play around,” explains Mabandla. “Ukulila means to cry. Umlilo could also be seen as ‘the cry’. The things I was writing about are the things that are painful for me inside, and talking about them was releasing a type of cry, those tears. I thought it was a great play around to make your tears fire as well.”

Mabandla’s music is a fusion of traditional African and contemporary folk sounds, with some dub influence thrown in, courtesy, no doubt, of Chibanga. “Growing up I listened to Bongo Maffin a lot, I wanted to be their third member,” Mabandla says. “They really shaped me – it was one of the first times that I saw African music being idolised like that. Thandiswa was showing her dreads and beads, it really influenced me; initially that’s what made me want to get into music. As I grew older, Tracy Chapman really influenced me, as well as The Fugees.

“I didn’t come from a traditional home, but I was exposed to that kind of music, just being in rural Eastern Cape,” says Mabandla. “I think a lot of that is influence from Thandiswa and Busi (Mhlongo) – the people I discovered when I was in Joburg and trying to be a musician, ‘cause Joburg has so many different people. Jabu Khanyile influenced me immensely. My album’s very African. We use a lot of percussion, African drums and the uhadi. But I would say the play with traditional element really comes through with the voice and vocals. There’s a new Maskandi feel that I’m sort of going into. ”

Making the album has been a long and painstaking process. “I wrote for a few months, then I started performing with a band (to get) the feel of the songs. I came into studio for that and recorded guitars,” Mabandla says. “After guitars, my voice. It’s important that your voice really drives the song – they can play around you. And they put all the instruments later, and the back-up vocals later. Then I came back and redid my vocals on top of them. But it’s a long process, and once you start doing things like that, you almost can’t get lazy in the middle, ‘cause (what you’ve done already) is so fine-tuned.”

Laziness isn’t a quality you could accuse Mabandla of – between focusing on his music career, he’s acted on “Generations”, “Intersections” and the forthcoming movie “A Million Colours”. But music is where his heart is. “I love being a musician because I can do my own thing, and I can always direct,” he says, “but I find in acting, you’re always doing someone else’s vision.” Mabandla has now attracted other musicians to become part of his vision, with Zulu-Boy, MXO, Kyla-Rose Smith (Freshlyground) and Nosisi (formerly of Kwani experience), all lending their talents to tracks on “Umlilo”.

Mabandla paused when I asked him why people should vote for him in the RFI Music competition. “That is a difficult question,” he laughed. “Because I think I’m a new type of product, if I can put it like that. It’s something fresh, I don’t think it’s been done before – a lot of fusion.”

Give his music a listen on MySpace and hear for yourself. DM

Voting in the RFI Discoveries Award is open until 13 September. Winners will be announced on 23 September.