A brief look: The Onion cruelly snatches away free happ...

A brief look: The Onion cruelly snatches away free happiness 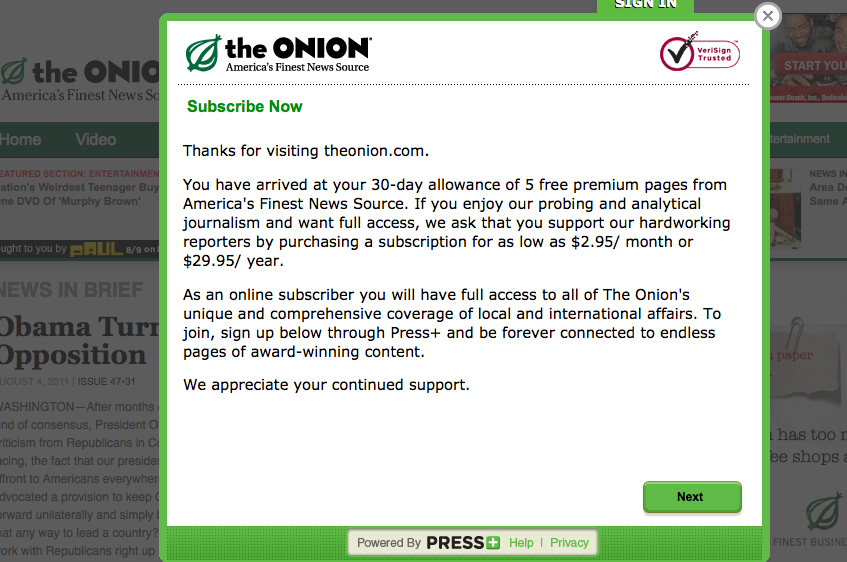 Satirical website The Onion's announcement of its new paywall is no joke. The plan is still in a testing phase, but the international contingent of its 7.5 million monthly readers has every reason to start crying into their browsers. By THERESA MALLINSON.

To quote from The Onion article: “To ask NYTimes.com’s 33 million unique monthly visitors to switch to a cash-for-manufactured-goods-based model from the standard everything-online-should-be-free-for-reasons-nobody-can-really-explain-based model is pretty fearless. It’s almost as if The New York Times is equating itself with a business trying to function in a capitalistic society.”

As Huffington Post pointed out, The Onion wasn’t poking fun at the paywall itself, but readers’ reactions to it. In retrospect, this was a giant clue The Onion itself would soon be adopting the same “fearless” business model.

Of course, there’s a pretty big caveat – the paywall applies only to non-US readers of the website, for now. Oh, and it won’t affect US troops either. “It also won’t apply to areas where a lot of American troops are deployed in combat, as The Onion recognises that it has a large fanbase in the armed forces, and it doesn’t wish to charge them for being overseas. They also have better stuff to worry about,” as news editor Sean O’Neal explained. How exactly this exemption will be rolled out is yet to be explained.

The rest of us will still be allowed free access to five full articles a month, the home page, the section pages, and non-satirical pop culture section, the AV Club. If you want more than that, you’ll have to cough up $2.95 a month, or $29.95 a year.

Devoted Onion fans will be hoping this paywall announcement is one of the website’s typical jokes, as in 2009 when The Onion announced that it had been bought by a Chinese company. But that seems highly unlikely. No less than any other media organisation, The Onion is “a business trying to function in a capitalistic society”.

What does seem probable, is that the paywall will eventually apply to US readers as well. The Onion’s chief technology officer, Michael Greer, said: “We are testing a meter internationally as readers in those markets are already used to paying directly for some (other) content, particularly in the UK where we have many readers.”

Time for Onion fans to brace themselves for the real cost of fake news. DM