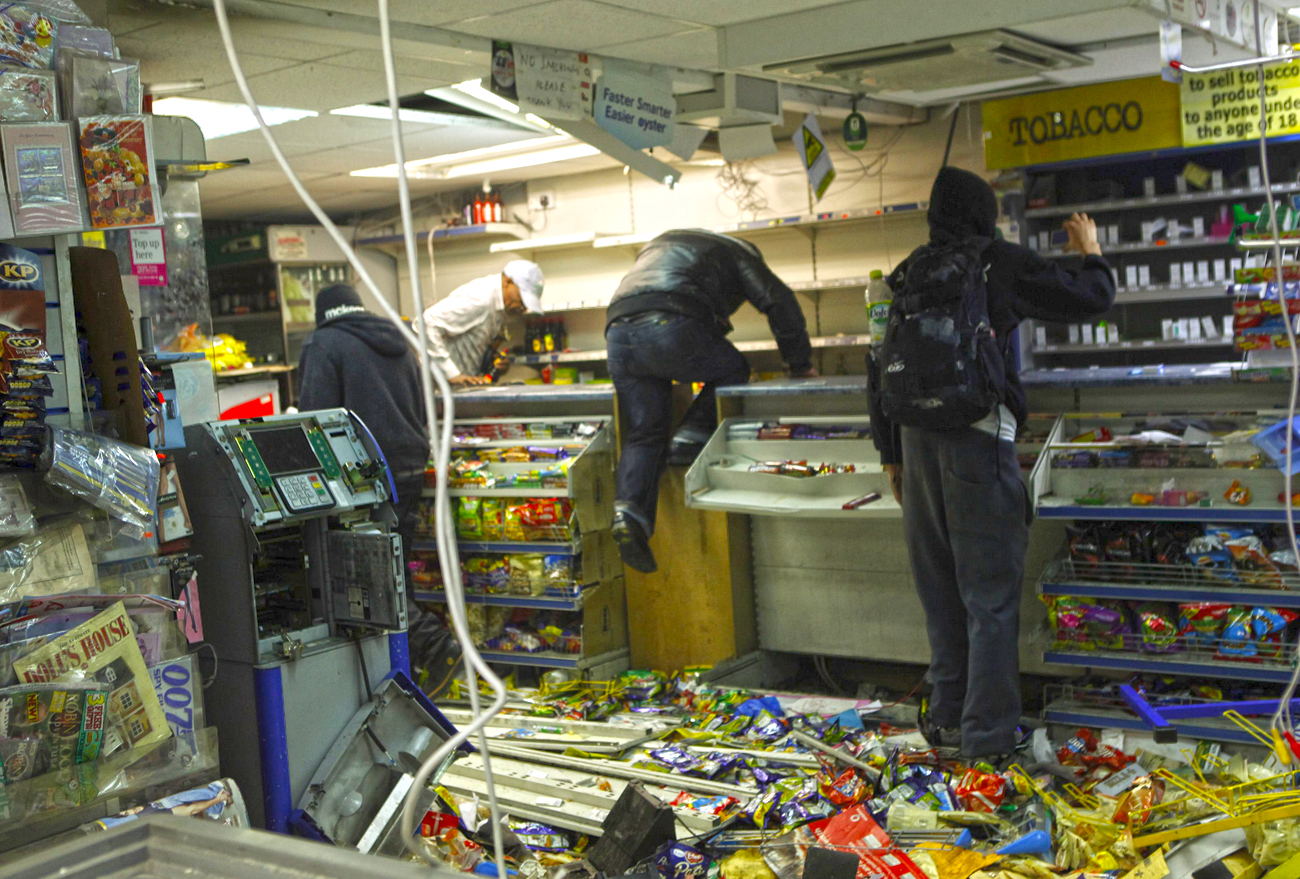 The riots in Britain, as violent as anything the country has seen in a generation, have been blamed on everything from David Cameron’s austerity measures to police brutality to an era of rampant thuggery. Try instead blaming it on an album called “Never Mind the Bollocks, Here’s the Sex Pistols,” by some lads called the Sex Pistols. By RICHARD POPLAK.

The following paragraph, the most famous hangover scene ever crafted in literature, is why London is currently burning. To wit: “[Jim] Dixon was alive again. Consciousness was upon him before he could get out of the way… He lay sprawled, too wicked to move, spewed up like a broken spider-crab on the tarry shingle of the morning… His mouth had been used as a latrine by some small creature of the night, and then as its mausoleum. During the night, too, he’d somehow been on a cross-country run and then been expertly beaten up by secret police. He felt bad.”

This is from the poison pen of Kingsley Amis, one of the so-called “Angry Young Men” the loose affiliation of British writers who tore through the 1950s, thumbing their noses at class and social conventions. They were lower- or middle-class, often thrown into upper-class institutions (Amis, along with Phillip Larkin and John Wain did hard time in Oxbridge), and the one thing that linked them was their loathing of the status quo. “Lucky Jim”, from which the above paragraph is quoted, is the most trenchant example. The book links with a streak of anarchic film (based on literature), including Mike Hodges’ brilliant “The Loneliness of the Long Distance Runner,” and Kubrick’s “A Clockwork Orange”.

By 1973, in their album “Preservation Act 1”, The Kinks were asking, “Where have all the angry young men gone?/ Barstow and Osborne, Waterhouse and Sillitoe/ Where on earth did they all go?” They were answered several years later by one Malcolm McLaren. McLaren, stepson of a tailor, had baked into his foppish outlook the esprit of the Angry Young Men, and set out to create a movement. Morphing the rage and disaffection of the New York hardcore scene with his own irreverent nature, with his then girlfriend, Vivienne Westwood, he opened a store called Too Fast to Live, Too Young to Die. He also started managing a band called The Strand.

Enter John Lydon, who dyed his hair green, and wore a ripped Pink Floyd T-shirt, augmented with the epitaph “I Hate”. McLaren had found his leading man, and The Strand became The Sex Pistols. Lydon was now Johnny Rotten, and in 1977, The Sex Pistols celebrated the Queen’s Silver Jubilee by releasing “God Save the Queen”. The single was followed by the album “Never Mind the Bollocks, Here’s The Sex Pistols”, and the punk movement entered mainstream consciousness. That same year, the Pistols toured the US, and a year later, they imploded.

So runs a potted history of post-war disaffection in Britain. It leaves out more than it encompasses—race riots, union riots, tax riots, etc. But it traces a thread of rage that has run through British society since the end of the World War II, when it had become clear Britain would never regain its status as an imperial power. The prestige sloughed off like so much dead skin, and successive British governments have lamented the death of the social contract. Hoodies, they tell us, rule the streets. The legendary British stoicism of the Blitz years, the ideal of accepting one’s lot, is no longer. “Time to get mine,” insist the riff-raff on the streets.

McLaren, were he still alive, would love what’s currently going on in Britain’s poorer neighbourhoods. He was not an anarchist so much as a capitalist who saw opportunity in chaos. He also understood the ramifications of societal dissolution or had been made to understand them. Two years after the Pistol’s Sid Vicious died of a heroin overdose, and the year a man named Mike Duggan was born, the Brixton Riots engulfed South London, and redefined Britain’s understanding of itself.

That understanding has remained remarkably intact since the violence exploded in 1981. It runs like this: The UK is a stagnant society, an old-boys club in which upward mobility is all but impossible, where the bankers get rich and their lawyers keep them out of trouble. There has been little to no racial integration, and young people looking for a job—especially if they happen to come from lower income hoods—are out of luck. Conversely, the dole has kept the lower-classes living on handouts, and three generations of social entitlement have rotted the core of the British soul—self-reliant, proud, and stoic—into downy soft automatons who can no longer feed themselves.

In other words, Britain is at a cultural and societal impasse. The outrageous spending of the Labour years, and the loosey-goosey banking regulations that all but collapsed the country’s economic engine, have led inevitably to David Cameron’s austerity measures. Has life changed in Tottenham since he tightened the country’s belt? Not appreciably, by all accounts. But what Alex Wheatle writes in The Guardian is instructive:

“Although the circumstances in Brixton 1981 and Tottenham 2011 are remarkably identical; economic crisis, disenfranchised young people, deep cuts in public services and a deterioration in the relationship between young black people and the police, from what I saw in Tottenham I didn’t detect any resolve in the insurrectionists for them to take the police to account. There was no standing their ground making a lasting statement and I couldn’t identify any hint of political motive.”

The riots in Tottenham, which have spread across the country like an epidemic, were ostensibly jumpstarted by the death of 29-year old Mike Duggan (either a gangster or an angel, depending on the newspaper.) Shot in the chest by police, Duggan left behind a fiancé and three kids. What began as a peaceful protest has yet to simmer down, and is destined to spread further before it is doused.

“Anarchy in the UK,” yelled the Sex Pistols. Here it is. “London’s Burning,” insisted The Clash. Wish granted. Along with the Angry Young Men, the punk and post-punk movements identified a streak in British culture that is almost as old as the nation itself. The Gordon Riots of 1780—an anti-Catholic conflagration that makes the current violence looks like child’s play—are the sine qua non of British ultra-violence. Moorfields—the Tottenham of yore—burnt with ethnic hatred. Two-hundred-and-eighty-five people were shot dead, and a further 200 were wounded. The riots occurred at a time of immense unease—the American War of Independence, war with France, and great squeamishness about the role of Catholics in society.

Anarchy reigned in 1780. It reigned in 1981. And it reigns today. How will it all play out? As Dickens answered, in his tale of the Gordon Riots “Barnaby Rudge”: “Something will come of this. I hope it mayn’t be human gore.” Britain is reminding itself of its soul, of the inequities that exist in its society. It also learns, once again, that violence born of indolence and boredom is violence nonetheless. In the words of the perhaps the most famous fictional purveyor of British ultraviolence, Alex of “A Clockwork Orange”: “Um… My mind is a blank… and… uhh… and I’ll smash your face!” A smashed face hurts, no matter the motivation. DM

Photo: Looters rampage through a convenience store in Hackney, east London August 8, 2011. Youths hurled missiles at police in northeast London on Monday as violence broke out in the British capital for a third night. REUTERS/Olivia Harris