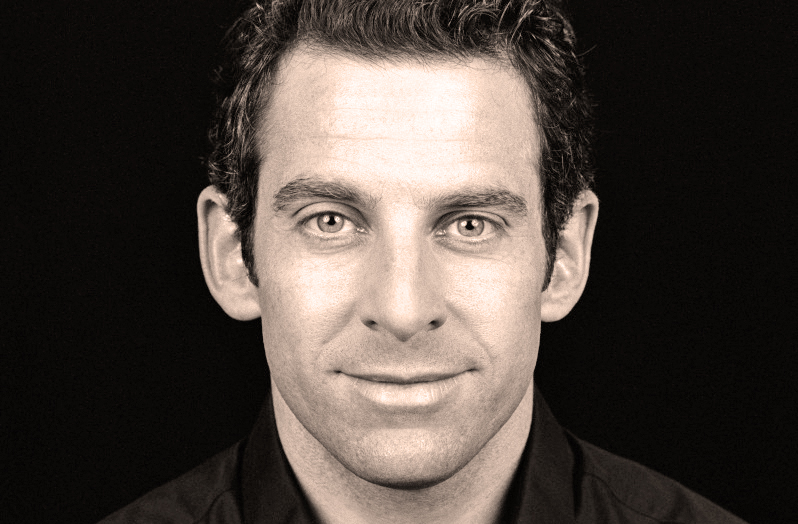 Bashing Islam has become a lucrative hobby horse for US-based atheists like Sam Harris, whose fear mongering is a convenient marketing tool that buoys book sales and drives funds to his non-profit, pro-reason project. But while Harris clearly benefits from his misanthropy, what kind of legacy will he and other Muslim-hating new atheists leave this world? By MANDY DE WAAL.

Sam Harris has fast become the poster boy of the new atheism with his bestselling books; eloquent Deepak Chopra bashing; and his rising presence in all the right media.

This atheist with an attitude can be read in The New York Times, The Economist and Newsweek, and is a master of the misanthropic soundbite. With a degree in philosophy from Stanford and a PhD. in neuroscience from UCLA, Harris intellectually clubs spiritual “gurus” like Chopra, in much the same way fur hunters club baby seals.

Watching Harris take on Chopra, it is easy to see why the quack that loves quantum is way out of his depth. Chopra stalls like a buck in the headlights in the onslaught that is Harris’ lightening-fast mind.

Intellectually clubbing seals is a practice fairly common among atheists, and one which earned Richard Dawkins’ the moniker “Darwin’s Rottweiler”. American popular science magazine, Discover, eloquently explains why Oxford theologian Alister McGrath evoked this snarling metaphor to describe the combative intellect of this evolutionary biologist and bestselling author of “The Selfish Gene” and “The God Delusion”.

“He has waded into this battle as a self-styled paladin of scientific rationality. An unabashed atheist and an avidly polemical public intellectual, he has employed a scorched-earth vocabulary to take on religion, the evangelical right, Muslim fundamentalism, parochial education and the faith-based political philosophy of George W Bush,” McGrath wrote. Describing himself, Dawkins says: “I am a fairly militant atheist with a fair degree of active hostility towards religion,” adding, “To me religion is largely an enemy of the truth.”

The animosity that atheists like Dawkins and Harris harbour for religion, particularly those premised on blind faith, is reasonable if not understandable to people who love truth and favour logic above a slavish devotion to some intangible deity. “I have a (you might say fanatical) desire for people to use their own minds and make their own choices, based upon publicly available evidence,” says Dawkins. “Religious fanatics want people to switch off their own minds, ignore the evidence and blindly follow a holy book based upon private ‘revelation’.”

There is much that unites Dawkins and Harris, but more that divides them. This is evident in how the more mature Dawkins perceives the religious. “The majority are ignorant, which is not the same thing as stupid. Natural selection will not remove ignorance from future generations. Education may, and that is the hope to which we must cling,” Dawkins wrote in the UK Independent in answer to the question: “Are people who advocate intelligent design stupid, and do you think natural selection will operate to remove them from future generations?”

The younger Harris has enjoyed the luxury of observing Dawkins’ career growth and the celebrity the older atheist has enjoyed, but provocatively pushes faith-bashing beyond intellectual reasoning into a vituperative emotional realm that shows little if any intellectual restraint. In his bestselling book “The End of Faith” Harris says, “It is imperative that we begin speaking plainly about the absurdity of most of our religious beliefs”. Fair enough, but he takes this further with “Theology is now little more than a branch of human ignorance. Indeed, it is ignorance with wings,” and “Much of the world’s population could be annihilated on account of religious ideas that belong on the same shelf with Batman.” In reading Harris one gets the sense that he relishes in the art of the faith-based insult.

However, Harris reaches full mocking stride when it comes to the subject of Islam and in the same book says: “Islam, more than any other religion human beings have devised, has all the makings of a thoroughgoing cult of death.” The tipping point for Dawkins, Harris’ intellectual mentor, was 9/11 which proved his view of the faithful. “Many of us saw religion as harmless nonsense,” Dawkins told the media after 11 September 2001. “Beliefs might lack all supporting evidence, but, we thought, if people needed a crutch for consolation, where’s the harm? September 11th changed all that. Revealed faith is not harmless nonsense, it can be lethally dangerous nonsense. Dangerous because it gives people unshakeable confidence in their own righteousness. Dangerous because it gives them false courage to kill themselves, which automatically removes normal barriers to killing others. Dangerous because it teaches enmity to others labelled only by a difference of inherited tradition. And dangerous because we have all bought into a weird respect, which uniquely protects religion from normal criticism. Let’s now stop being so damned respectful!”

Emboldened by “The Devil’s Chaplain” and the Islamophobia that swept across the Bush-led US like a plague in the aftermath of 9/11, Harris readily joined the witch-hunt to pin the responsibility for one of mankind’s most reprehensible, and public, acts of mass murder on the scapegoat of Islam. Harris’ bestseller “The End of Faith: Religion, Terror, and the Future of Reason” was written in the angry, anti-Muslim ferment that followed 9/11 and no doubt the rising American hatred of all things Islam hasn’t been bad for book sales.

“The End of Faith” begins with an account of the last day of a suicide bomber and then broadly examines the clash between reason and religion. Harris gives Christianity a quick kick in the gonads with a historical overview of persecution through the ages, before saying “knowingly or not, the Nazis were agents of religion”.

But Harris saves the full weight of his misanthropy for what he calls the “cult of death”, drawing a direct line between Islamic teachings and 9/11. Unlike Dawkins, Harris is much less Rottweiler and a whole lot more pit bull. “We are now in the 21st  century: all books, including the Koran, should be fair game for flushing down the toilet without fear of violent reprisal,” he writes in “The End of Faith”.

Unsurprisingly the mass murder in Norway provided another opportunity for a round of anti-Muslim vitriol from Harris. In a blog entitled “Christian Terrorism and Islamophobia” Harris declared that, despite media reports that Anders Behring Breivik is a Christian terrorist, his reading of parts of Breivik’s 1,500-page manifesto (2083: A European Declaration of Independence) left the atheist with doubts about the mass murderer’s religious leanings.

Harris then points out the obvious by saying that “Christian” terrorism won’t diminish Islam, but doesn’t miss the opportunity to put the boot in and insult followers of the Islamic faith by adding “(with) its repression of women, its hostility toward free speech, and its all-too-facile and frequent resort to threats and violence”. Harris then grinds in the heel of hatred by adding: “Islam remains the most retrograde and ill-behaved religion on earth”.

The question that begs to be asked is whether Harris realises that his hate speech won’t diminish the growth of Islam, but may actually fuel it? The other obvious question is whose interests are served by Harris’ fear and loathing?

There is another, equally important, debate that relates to Harris’ ignorance of Islam and his vulgarly reductive view of this faith, but let’s save that for another day. Right now let’s just look at who benefits from Harris fuelling US (if not global) hatred for all things Islam and how it benefits mankind.

The same research centre shows that tensions between the West and Muslim publics are persistently heightened with both parties describing relations between them as generally bad. “Many in the West see Muslims as fanatical and violent, while few say Muslims are tolerant or respectful of women,” the Pew research states. “Meanwhile, Muslims in the Middle East and Asia generally see Westerners as selfish, immoral and greedy – as well as violent and fanatical.”

Given that anti-Islamic vitriol from “new atheists” like Harris isn’t doing anything to stop the growth of Islam or to engender better relations between Islam and the rest of the world, what purpose does it serve?

Perhaps the answer lies in looking at the growth of atheist book sales, which has spawned a flourishing speaker circuit for the likes of Harris. In 2006, some months after the paperback edition of Harris’ “End of Faith” was published and entered The New York Times Bestseller list, the Association of American Publishers showed that the sale of religious books in the US was in decline. The one category that bucked this trend was the sale of atheist tomes.

In 2007 in a post 9/11 world, the top three bestsellers were Richard Dawkins’ “The God Delusion” followed closely by two of Harris books namely “The End of Faith” and his second book “Letter to a Christian Nation”. Following the massive success of his books, Harris now demands in the region of $25,000 for speaking engagements and runs Project Reason in conjunction with his wife. A non-profit foundation said to be “devoted to spreading scientific knowledge and secular values in society”, Project Reason “draws on the talents of prominent and creative thinkers in a wide range of disciplines to encourage critical thinking and erode the influence of dogmatism, superstition and bigotry in our world.”

Yet Harris repeatedly engages offense and bigotry to conjure the spectre of Islam as a fearful marketing convenience that sells books and drives funds to an organisation that should be promoting intellect, logic and reason. As Harris remains trapped in the quagmire of his divisive rhetoric, US hatred of all things Islam grows – as evidenced in Pew’s surveys and the violent social media skirmishes between Harris’ rabid followers and people who take offence with his hate mongering.

It has often been said that no war was ever fought in the name of atheism, but Harris and his new legion of Islam haters could change this as they use “truth” and reason as weapons to try to decapitate that which they despise.

Instead of using “genius” to foster better relations between the West and Islam, or seducing converts to truth and reason, Harris relishes that which is little more than hate speech. It’s good for book sales and his standing on the speaker circuit because it feeds a fearful market desperate to demonise an enemy and avoid looking within. But for a movement whose providence is the intellect, a self-serving Harris’ and his rapidly spawned sea of Islam-hating adherents could be one of the dumbest contributions atheists have yet to offer this world. DM