Analysis: Malema and race, handiest political tool of all 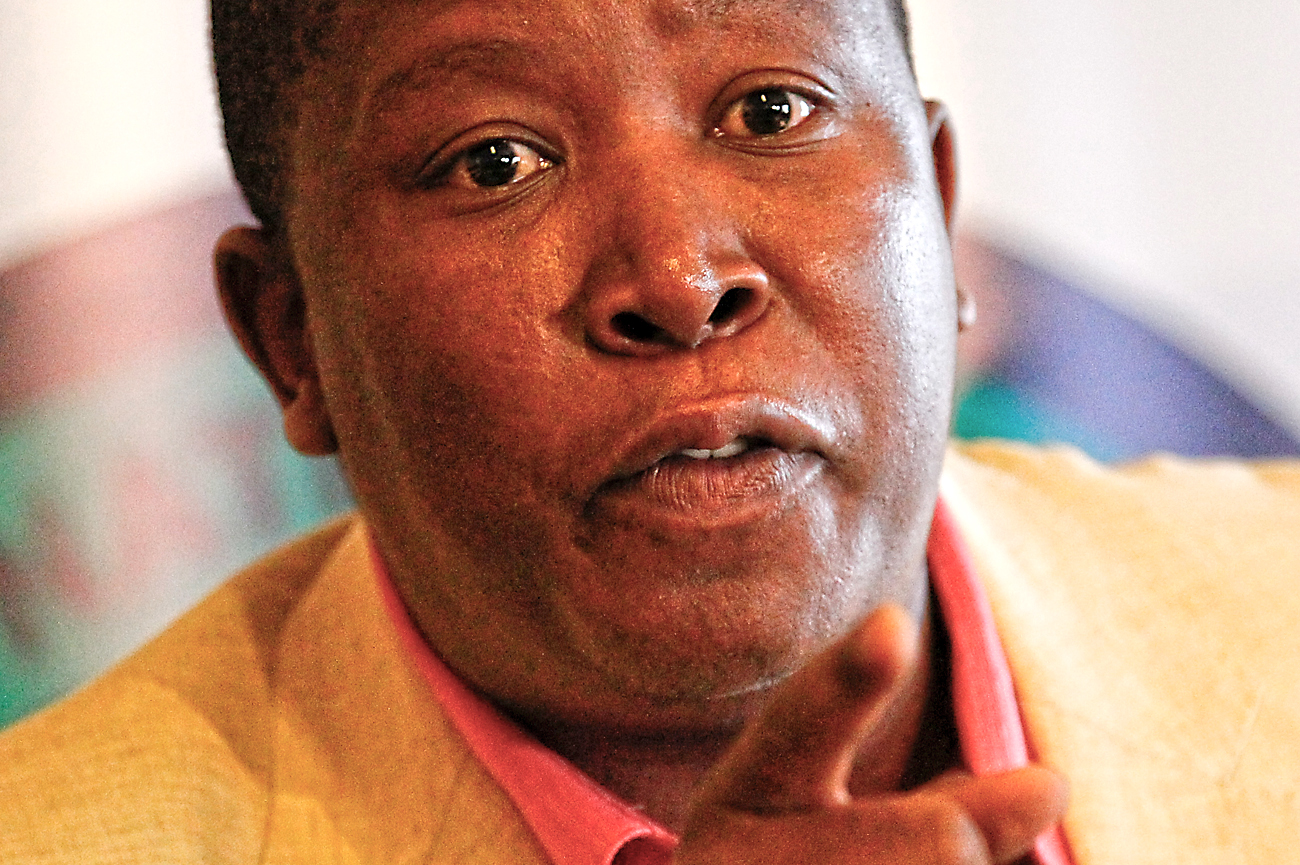 Things racial are beginning to take a turn for the worse in SA. There’s a process under way that is a harbinger of a rocky road to come for the “Rainbow Nation”. Some say it could lead to our unravelling as a country - and  sometimes it’s hard not to feel it. On top of that all the signals are it’s going to get much worse before it could even begin feeling better. By STEPHEN GROOTES.

Julius Malema just has to be the most polarising figure of our times. He’s a populist, demagogue, emotional and powerful. He pushes buttons in just about every South African, across the melanin and wealth rainbow spectrum, everyone has an opinion about him. He’s probably also the most influential opinion-maker in the country; everything he does become a newsworthy event.

From the very beginning, the defining issue hanging around Malema has been race. More even than any other ANC politician before him, it seemed to lurk everywhere he went. It started slowly and we were shocked how easily. Back in 2009, he was still being reined in by the ANC for saying, “I would kill for Zuma”. Now, there’s no predicting what will come out of his mouth. And we have become dangerously inured to it. “The DA is for white people, the ANC is for you” barely raised an eyebrow.

These days Malema is under pressure. City Press’ allegations against him are hurting. The fact he didn’t face the music himself at the ANC Youth League’s press conference on Monday was telling. He is also not suing the paper (despite a bit of confusion between his lawyers and the state/public broadcaster, but at the moment, there is no promise of defamation action coming). And the language is all racial. The League has blamed everything that has happened to Malema on race. The reports were the work of the Broederbond, whites don’t want to see an “African child” succeed, it’s Naspers who owns land that is against us, “you mustn’t come here with sponsored views”, journalists are being “controlled”. All of it is, of course, factual nonsense that, rather tellingly, points to a racial conspiracy theory.

And if you are a populist, a conspiracy theory is what you need. Hitler had the “Stab in the Back Theory”, that Jewish people had forced Germany’s defeat in World War I. Malema has the claim that every white person is out to get him. That without white people, he and his supporters wouldn’t have any problems, all their problems are the fault of white people.

For a populist to really succeed with this gambit, he needs two things. Easily identifiable divisions between people and poverty. South Africa is fertile ground. Differences between people are easy to see. In the former Yugoslavia it was religion and ethnicity, here it is race. In Rwanda and Burundi it was tribal division. Malema is simply, and incredibly skilfully, exploiting the way we look and where we come from, and ignoring the way we think, act and believe. If someone thinks differently to him, but happens to be black, they are labelled “white servants” immediately. There’s a variety of codes, from “has a white boss” to “coconut” to “being controlled”. And, of course, in the  sea of South African poverty it is easy to see that there are many more poor black people than there are white people, a fact that is almost unbearably easy to exploit.

With Malema, your identity is all that matters, it’s what you are, not what you can do, or what you believe, or how you act, that matters. It’s “four legs good, two legs bad”. Your competence goes out the window too. Ever noticed how often the League sticks its nose into government appointments? It will support Siyabonga Gama or Jacob Maroga, always on the grounds of their race, never their competence.

Looking a certain way is more important to a populist than what you can do. Political correctness is more important than the economy. It trumps feeding the poor and creating a better life for all. For the League, what you look like as a reporter is more important than the publication you represent. Floyd Shivambu on Monday was picking reporters to take questions from  when he said, “they are all white people by the way”. Why say that? It’s because, to him and the League leaders with him, race is all that matters, the handiest tool of them all. Never mind who the readers of City Press are, or that the reporter who has been the biggest thorn in Malema’s side, Piet Rampedi, happens to be black.

A populist like Malema forces people to take positions, through “you’re either for us or against us” attitude that excludes any other position in between. Malema will not allow anyone to remain silent. The ANC Women’s League won’t support him and out come the insults; the DA brings a good argument, and Lindiwe Mazibuko “is a tea girl”. A populist will simply refuse even to engage in an argument with his opposition. Malema refuses to debate with just about anyone. Because his way is the only way. There is no other way, so listening to any other opinion is just a waste of time.

But as he comes under more pressure, Malema’s use of the race card is bound to get worse. As he runs out of options, he has nowhere else to turn, but to the conspiracy theory. The racial comments, the insults, the conspiracy theories, the sheer naked racism, the whole lot, will intensify to match severity of legal problems he will face. The reason is painfully simple: It’s all he has left in the arsenal. So, we’ll go from “previously advantaged” to “white people”, from “apartheid capitalists” to “white people”, from “forces opposed to change” to “white people”.

Is it our destiny that Malema will force us to unravel racially? Will other forces in society stop that from happening? Perhaps not so easy a development.

Firstly, to re-racialise our politics is harder than it used to be. Despite what some think, every day in every way people are integrating across colour lines. In our mainstream, outside of family (and to an extent, church) it’s hard to imagine all-white spaces. The fact there are all-black spaces is a function of few poor white people and that white people simply don’t live in every corner of the country. In the urban areas, class is becoming more important than race. What you can do and what you are like as a person are more important than what colour you are.

Then there’s the ANC itself. It is still a multiracial organisation. It is hard for it not to be so. As we’ve said before, if it were not, it would cease to govern quite quickly, because it is either for everyone or it is not. There’s not much clear water between “only black’ and “only this tribe/group/language”. And the ANC knows this. Once you unpick the multiracial nature of the party, you unpick the party until it disintegrates into factions.

Then there is the sheer politics of it. At the moment, Malema is seen as unstoppable. But just the slightest indication that he is not, just a whiff of blood in the water, and things can change suddenly. There is a reason why nobody stood up to Rupert Murdoch for so long, and why the sharks are feasting now. The majority at the moment are too scared to take Malema on. It’s understandable, on your own, you’ll just get trampled, labelled “white slave” or have “tendencies”. But if something were to go wrong for him, and if one senior, powerful Zuma-aligned ANC leader were to pounce, followed by another, then another, there would be a storm of pain for Malema. People can turn quickly. Thabo Mbeki knows that well. Once he was all powerful, but once there was a reason for him to go, it took just eight days for him to be recalled. The same could easily happen to Malema.

And as we get closer to Mangaung 2012, the stakes, for all of us, and for Malema, get higher. If you were Mantashe or Zuma, when would be the best time to make your move? When you can take out Malema and the person he is supporting at the same time. So, presumably too close to Mangaung for Malema and Fikile Mbalula to regroup.

South Africa is not Zimbabwe. It is a complex place. There are ebbs and flows, progress and reverses, ripples across our society. It is changing all the time. Malema is one of the biggest forces in it. What he represents, the worst kind of racism, anger, demagogy and populism, make up a huge force. But it is by no means the only force. DM