A ‘bewildering’ currency war erupts in the Sudans 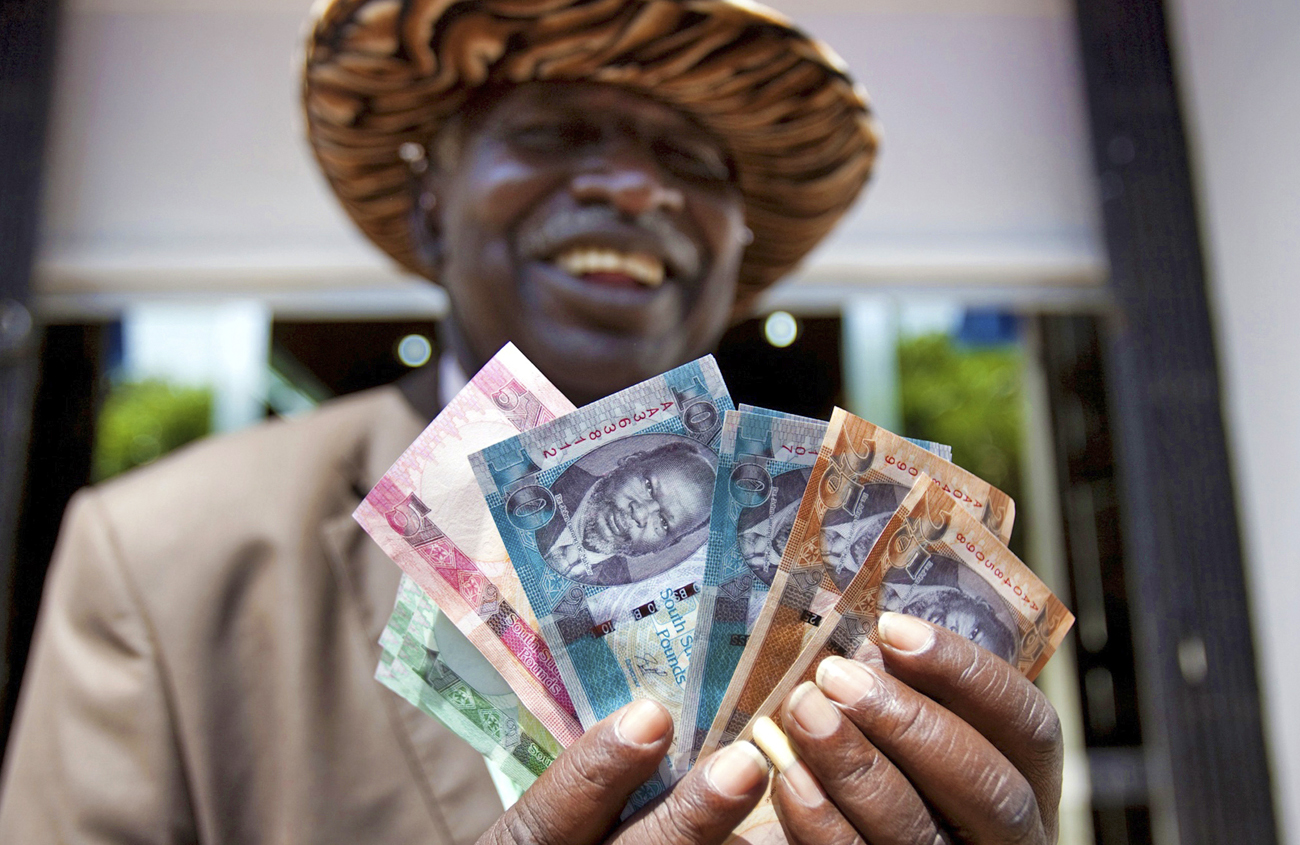 Planeloads of shiny fresh banknotes arrived in South Sudan’s capital Juba as the world’s newest country launched its own currency, the South Sudan pound. Khartoum’s not happy, and with reason; the two nations had agreed to retain the old Sudanese pound in circulation for another six months. Sudan retaliated by announcing the release of its own new notes. This begs the question: If neither side can honour its agreements, how can any negotiations continue in good faith? By SIMON ALLISON.

Despite an agreement to keep the old Sudanese pound in circulation for a healthy interim period, both South Sudan and the north recently announced the launch of new bank notes. Plane loads of different denominations of the new South Sudan pound have been arriving in the new nation’s capital, Juba, while Sudan will unveil new note designs later this month.

The South Sudanese notes feature the face of resistance leader and icon John Garang, who was killed in a helicopter crash shortly after the signing of the Comprehensive Peace Agreement between the Sudanese government and the rebels in 2005. These first edition notes are likely to become collectors’ items.

Strictly speaking, the new notes aren’t the problem. It’s what to do about the old ones. South Sudan is insisting that Khartoum’s central bank buys back the old notes at face value, while Khartoum argues that the notes are valueless and should be surrendered at no cost to the northern government. Both sides are worried about the old notes remaining in circulation, causing an increase in the prices of basic commodities.

The launch of South Sudan’s new currency caught Khartoum by surprise. Everyone knew the notes were being printed – the South had made a big deal about ordering the new currency to guard against northern currency manipulation – but it had been agreed that the old Sudanese pound would be kept in circulation for six months to allow for an orderly withdrawal. The violation of this agreement is further proof – if any were needed – of the trust deficit the countries will need to overcome if they’re to peacefully solve their numerous differences.

The deputy governor of Sudan’s central bank said his country would not be afraid to escalate the issue if need be. “We do not want to engage in a war of currencies, but if the south wants, so [be it],” he said. “We have no interest in occurring bewilderment to the economies of both countries.”

Although we have no idea exactly what would happen if bewilderment were to occur in an economy, it’s unlikely to be a good thing; and it is not an unlikely scenario, given that no-one at the top of either government seems to have a firm grip on sensible economic policy.

This is not the only agreement that the South has violated in the past few days. South Sudan’s President Salva Kiir said his new nation was not interested in continuing existing oil-sharing arrangements with the North, despite saying the exact opposite prior to independence. He said they would be happy to pay transit fees to use the North’s pipelines and port, but not to split the revenue. Kiir then upped the stakes by threatening to halt oil production altogether until the South has its own facilities in place. “They [Sudan] need oil. But we fought for 21 years without oil and we can still go for three years until we build our own oil infrastructure.”

Neither has Khartoum been very good at honouring agreements. Just prior to independence, Northern troops attacked and occupied the city of Abyei, due to have a referendum to decide its own future under the terms of the Comprehensive Peace Agreement, forcing the international community to send in peacekeepers to prevent it becoming a de facto part of the north.

The business of dividing a country in two was never going to be easy. Even if both sides were negotiating in good faith, the list of potential flash points is daunting: The border needs to be defined, the future of the oil-rich provinces of Abyei and South Kordofan needs to be determined, and somehow a decision needs to be reached on what to do about the former Sudan’s national debt, among innumerable other issues. But given the lack of respect on both sides for existing agreements, negotiations seem more hopeless than ever, and both Sudans look set to experience further turmoil and uncertainty under their current leaders. DM

Photo: A man from South Sudan displays new currency notes outside the Central Bank of South Sudan in Juba July 18, 2011. South Sudan started rolling out its new currency on Monday — the South Sudan Pound — escalating a point of simmering disagreement with Khartoum after the country split away from the north on July 9. REUTERS/Benedicte Desrus.