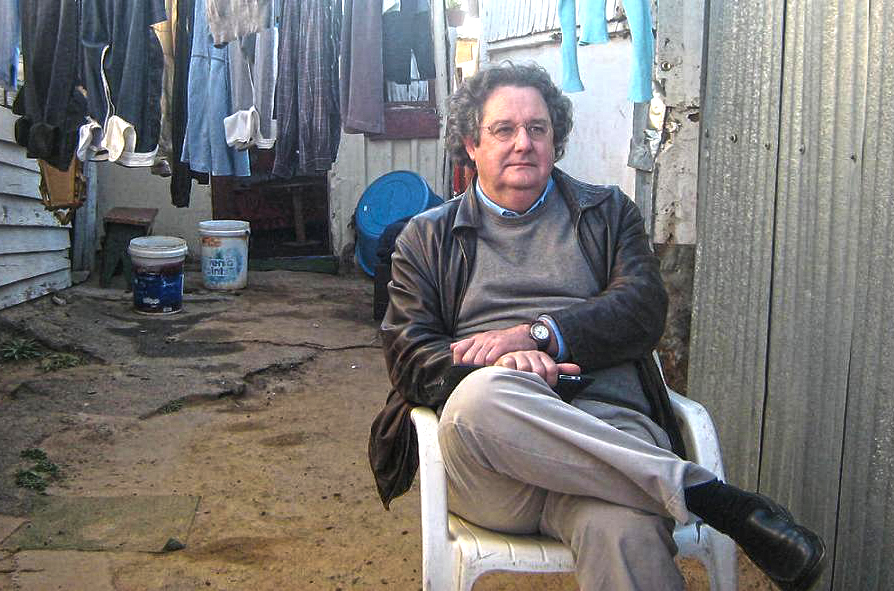 The images most white people exchange about Diepsloot are the stereotypical fragments of crime and murder passed around at dinner parties. They’re complemented by news reports on xenophobia and that mob murder story everyone read in The New York Times. Until Anton Harber went back to his journalistic roots, spent months in the township and wrote “Diepsloot”, there wasn’t any way to get an accurate perspective on the township, bar actually living there. By MANDY DE WAAL.

Some people believe Anton Harber should never have written “Diepsloot”. Eric Miyeni wrote a review about it in Sowetan without even reading the book. But it was Andile Mngxitama who argued that “whiteys can’t write about anything related to blacks”.

By extension, Mngxitama’s logic would realise a country where white journalists write about white suburbs or white commando training camps, while black journalists interview Julius Malema and cover service-delivery riots, and only Egyptians write about their own revolution.

But while intellectuals blathered on, Harber did what no one else has done. He went into Diepsloot, spent a lot of time there and wrote the book. Which means if you go to Amazon.com and look up “Diepsloot”, you’ll find only one book – Harber’s.

“I believe there is a gap in South Africa in reporting on places like Diepsloot,” Harber told me over a beer in Diepsloot. “Seems to me we can’t understand this country fully or where it is headed unless we have a better understanding of what people in a place like Diepsloot are saying and thinking.” The people who determine who assumes power and determine SA’s future are people who live in places like Diepsloot. If one wants to understand SA politics, it is useful to try to get a handle on townships like Diepsloot. “The white stereotype is that people are helpless victims and that these are places of crime and violence. The simplistic view is that life in Diepsloot is miserable. Yes, life in Diepsloot is tough, but in the book I try to give readers a sense of the individual experience. I’ve tried to break away from mobs and generalisations, and rather to engage with individuals, their lives, hopes and aspirations.”

A large portion of Harber’s book is about trying to understand the political and social dynamics of Diepsloot, a township that only makes the news during outbreaks of xenophobia, vigilantism or mob violence. “The people who live in Diepsloot are very conscious about this image and the constant complaint I heard during the months I spent here was about the way the place was viewed because of media coverage. The only paper that spends a lot of time in Diepsloot is Daily Sun. And, I say paper because the broadcasters do very little here. It is a disgrace that so little is done by the public broadcaster because one would have thought, given its mandate, the SABC would have covered Diepsloot decently.”

Daily Sun journalist Kola Alli virtually lives in Diepsloot, Harber said, but for the most part chases bodies. “He chases murders and vigilante justice because that’s the story of the moment. The rest of the local newspapers come here when there is an incident of violence or a huge protest or when someone outside of Diepsloot is killed here, like that priest who was killed here a while back. Or they come when a mob murder story makes the front page of The New York Times Magazine.”

The story of the Diepsloot mob murder isn’t a new one. It’s a story the Daily Sun covered a long time ago, but which The New York Times’ Barry Bearak picked up on and came to investigate. “There has been a spate of coverage on Diepsloot during the past few weeks and that is because of The New York Times’ piece.” Bearak spent months in Diepsloot investigating the story and getting various perspectives to write what became an in-depth 8,000-word feature.

“You take a paper like City Press. It didn’t report on the story when it happened, it didn’t even pick it up when its own sister newspaper carried it. But it did come to the story months later when it appeared in NYT, which I think says a huge amount about how we cover the place,” said Harber. “What this says to me is that the media are watching the edifices of power. I like to say that we have an edifice complex. Our eyes are on Parliament, Luthuli House, the Union Buildings… We follow politics that happens in the big edifices and in the corridors of power. We are obsessed with Malema and Zuma.

“What is missing from our understanding of the dynamics of this country is what is happening in a place like Diepsloot where you have a lot of people, where it is volatile and where clearly it is critical to understand, not just where the country is headed, but to understand the dynamic in the ANC,” said Harber.

After the time he spent in Diepsloot, Harber’s understanding of the local politics is that the ANC Youth League sets the agenda, much like it does for the rest of South Africa. “There are two city wards, so there is two of everything – two ANC branches, two SACPs, two Sancos, two community policing forums.”

The political struggle is all about control of the branches because control means access to resources. “The resources that come into Diepsloot are a big part of the local economy. The roads, the houses, the sewerage and the electricity, all of these services drive the economy, so the battles are about who controls the resources and the patronage they offer. And, let me tell you, these battles are bitter.”

The divisions in Diepsloot are not between the ANC and some external enemy, but between the ANC and its allies or friends. “When I first came (to Diepsloot) last year these parties weren’t talking and were very quick to denounce each other. The elections have changed this to a degree and brought a little more cohesion, but I suspect it is now reverting back to normal.”

Harber said being in Diepsloot made him realise that if you are a civic-minded or have any concerns about the stability of this country, the impact of unemployment and the high levels of poverty and inequality, you can’t even begin to understand the meaning of this without being immersed in community reporting. He said superficial media narratives on unemployment, poverty and inequality were a major problem for dialogue and communication in South Africa.

“Diepsloot is a completely different world from a Johannesburg suburb that is only a few kilometres away. In an ideal world the media would cross those lines and take people across those lines with it, both ways. But our media tends to reinforce the suburban bubble we live in.”

Given the absence of meaningful media coverage or any other book, Harber’s is the lone work that seeks to dispel stereotypes about Diepsloot. It isn’t definitive and hopefully it’s not the last book that will be written about the township, but for now it’s a story that begs to be read. Particularly by privileged whiteys who, for the most part, have absolutely no understanding of the masses who live outside of their own neatly manicured and well-protected suburbs. DM