In ‘Purgatorio’, me, myself and my unbearable love 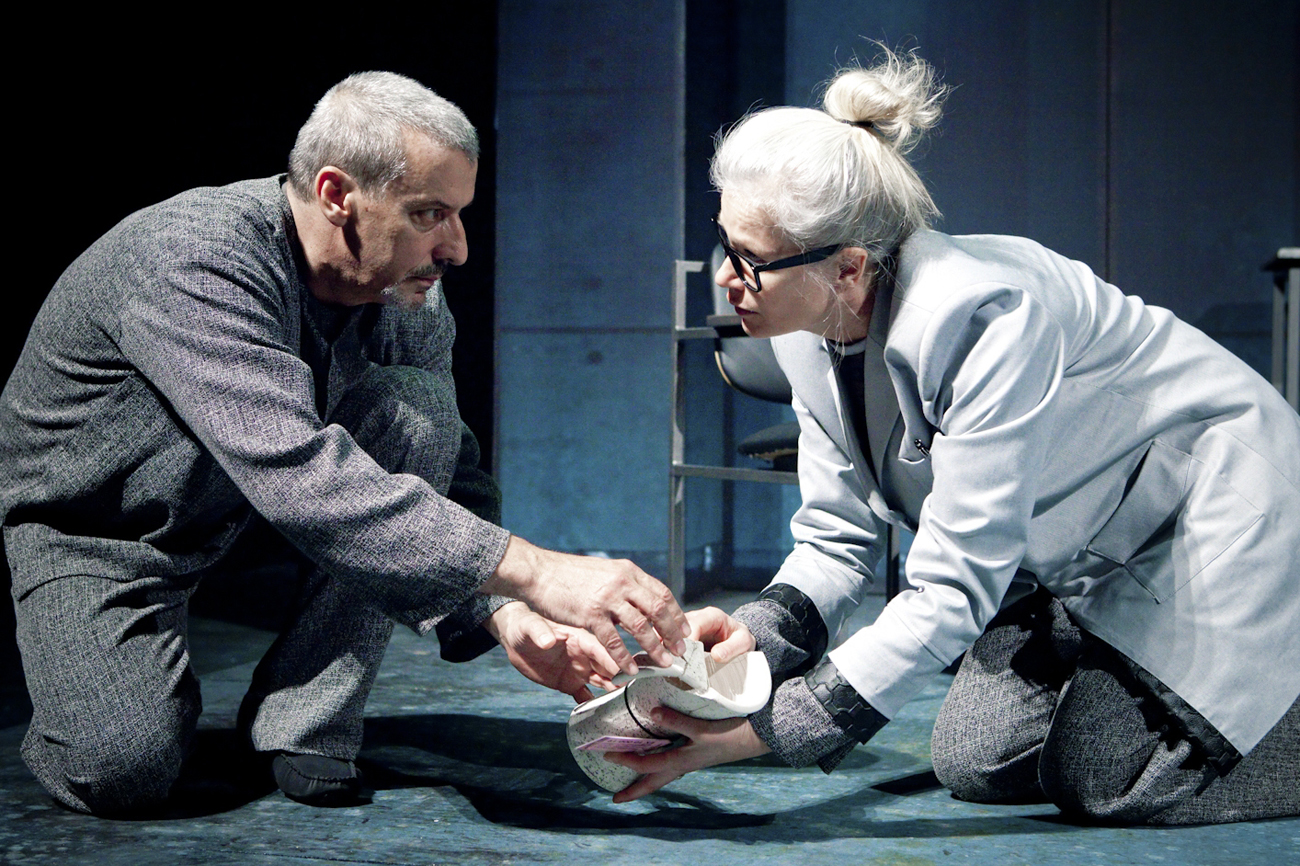 Greek mythology has its share of revenge, incest, hatred, fratricide and impossible love. The walls fall and emotions run free and one has a pretty good picture of life under the will of ambitious gods and reckless heroes. If it all seems a bit exuberant, it is unbearably real and contemporary under the pen of Ariel Dorfman and the direction of Clare Stopford. By EMILY GAMBADE.

Mythology is this allegorical subject you discovered in Grade 10, filled with heroes, journeys to the Underworld and very angry gods throwing tantrums and curses at each other. Interestingly, it has also been the basis of modern psychoanalysis, and thanks to, among others, Freud and Jung, it helped  map our busy and unsettled psyches. The archetypes developed in myths, showing unrestricted emotions and behaviours, paint a picture of what it means to… well, to go completely mad. Not that all characters depicted in myths are on the verge of insanity, but let’s just say they don’t bend to the same Constitution as the one in effect in South Africa, hence some kind of unrestricted pathological behaviours and almost apocalyptic chaos.

But here we are, in our civilised world, and one can wonder how to relate to some old stories of revenge and infanticide, apart from being horrified and waiting for the headlines in the morning papers. Well, myths are, as terrifying as this may sound, very relevant to our modern world and can even help us, should we be willing to give it a go, reflect on our deepest, darkest emotions. “Purgatorio” is based on the tragic myth of Jason and Medea. To cut the story short, this is about the jealousy and revenge of a woman betrayed by her husband. Medea left her father’s home for Jason’s sake, gave him two kids and all would have ended sweet and nicely had the King Creon not offered his daughter Glauce to Jason, as a younger potential spouse. Of course, Jason can’t really refuse and risk displeasing the King. Complicated? And it’s only the start. So off he goes to his new life, leaving Medea as a fresh bachelorette. But the woman is known for her violent temper and excessive sentiments and in revenge, she poisons the new bride and murders the two children she had borne to Jason. Disproportionate, surely, but you wouldn’t want to mess with a Greek enchantress.

Dorfman transposed the story into “a confined room, the kind you would find in an insane asylum or prison where couples enjoy conjugal rights”. A room where you would not want to be trapped, albeit necessary for your soul’s salutation. The place is squalid, two walls, one bed, a chair, a stool, images (or memories) of the past projected in the background. Welcome to purgatory, your room of bright sanity or eternal despair.

On stage, a man and a woman, a healer and a patient, or vice versa. They don’t know each other, or so it seems. The music is tense, high-pitched, the meow of a kitten irritating one’s ears. He is looking at her from behind his spectacles, she is punching a pillow with her fists. They are impatient, nervous, bursting with taboo words and hidden memories. And a past heavier than the whole galaxy – should one know how much a galaxy actually weighs. Terry Norton and David Minaar are impeccable in the roles of the woman and the man, interchanging souls, battling to forget, groping toward forgiveness. They both bring humanity to characters that carry the heavy weight of betrayal, murder and infanticide. Norton oscillates between indubitable resilience and touches of fragility. Feelings of hate and impossible pardon gnaw her and it is almost painful to see someone so deeply caged in her own history. The lighting design by Patrick Curtis underlines the tension, impossible quest, hopes and wonders of the characters with the delicacy and attention of a painter’s brush.

The two characters escape then bump into each other, in a battle of the minds. “When is this circle going to end?” he asks. But a circle doesn’t end, does it?

And this is the unbearable relevance of the subject: We are what we are because of what we do to ourselves and to each other. You can’t exist as a human being in isolation; this is the dark side of Ubuntu. If you don’t deal with it, if you don’t face whatever wrongs you have done, you may as well end up running like a hamster on its wheel.

Dorfman explains, “I had been wondering for a long time about the terrible things we human beings do to one another and how – indeed if – there can be some sort of reparation, redemption. And I wanted to take this into a one-on-one relationship in which damage is done, because it always comes down to one human being facing another one; it always starts there.”

“Purgatorio” tickles the fact that we are bound to one another and that, in the same way in which we hurt each other, we should be able to heal each other. Sitting through the play, it all looks as if it might be quite a bumpy and painful road, but at the end, it will always be better than being stuck for eternity in purgatory. DM