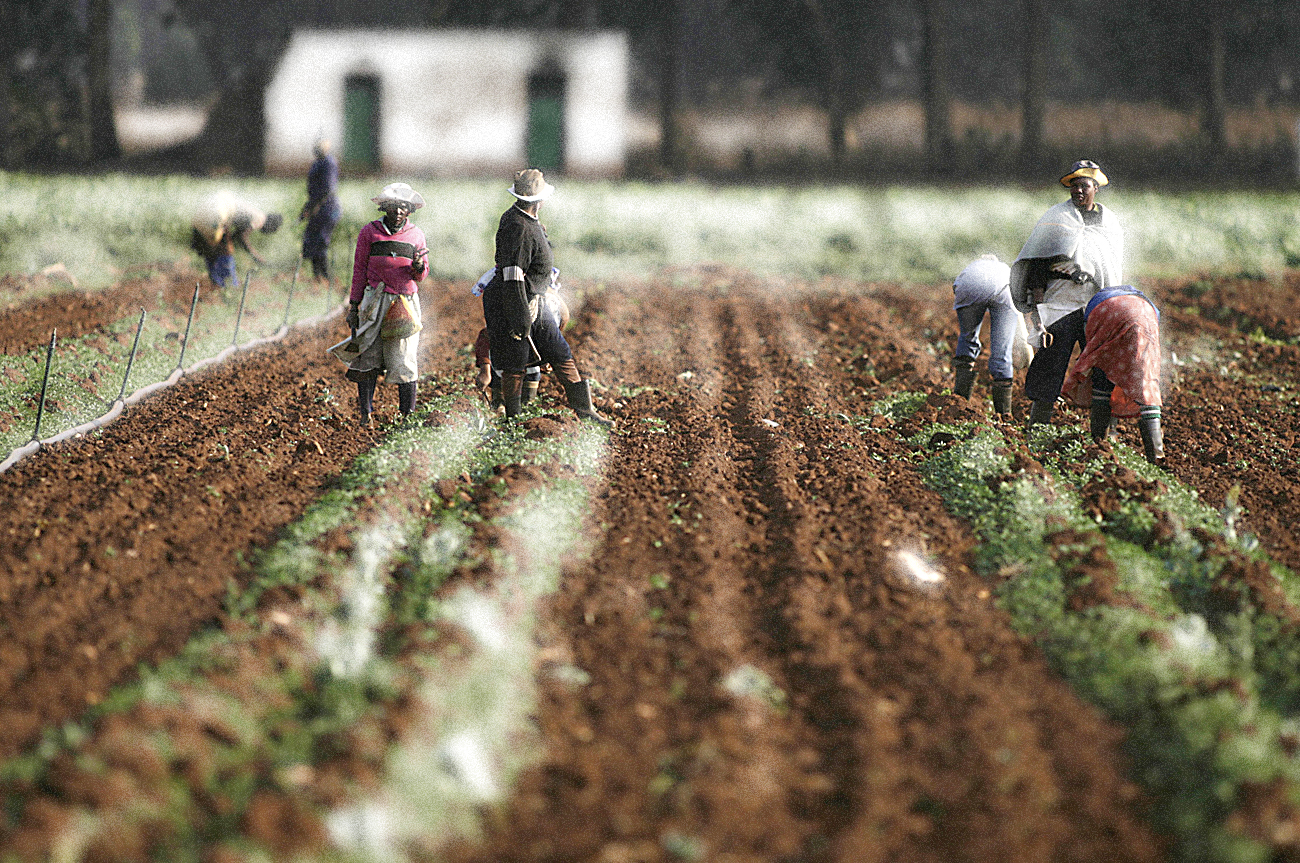 Land and land redistribution is easily one of South Africa’s most emotive political or economic issues. In Grahamstown this week Dennis Davis chaired a panel comprising Gugile Nkwinti, Mercia Andrews, and Stone Sizani to tackle just this topic. The arising discussion made some of the fault lines crystal clear – as well as the fact that more thought is needed before land-reform policies match the realities. By J BROOKS SPECTOR.

This panel discussion could easily be viewed as something of an interim report card on the country’s democratic dialogue about land – and more. TV star and judge Dennis Davis refereed a debate entitled “Land Reform and Rural Development” that brought together minister of rural development and land reform Gugile Nkwinti; Mercia Andrews, director of the Trust for Community Outreach and Education (and a founder member of the Conference for the Democratic Left); and National Assembly member and rural development and land reform portfolio committee chair Stone Sizani. The event was sponsored by South Africa’s Legal Resources Centre.

Speaking first, Mercia Andrews laid out a leftist agenda – although she eschewed immediate expropriation of land without compensation – by insisting on a speed-up in the pace of agricultural land redistribution, as well as a real change in how government responds to “land hunger”. In Andrews’ view, the fact that government puts this issue in the social-welfare policy and cabinet cluster, instead of the economic policy cluster, makes its real agenda clear. Andrews insisted the government must embrace the kinds of policies that will allow all these wannabe yeoman farmers bucolic to have access to commons areas so they can graze their domestic animals – a picture of agrarian happiness rather far from today’s harsher realities. And all without needing to worry very much about that awkward, inconvenient “tragedy of the commons”.

Minister Nkwinti then noted that to follow the government’s current “willing seller, willing buyer” policy to reach its publicly announced land transfer targets would drain about R40 billion from public funds, rather than his department’s current budget allotment for this purpose of only R2 billion. Unsurprisingly, the moment the audience could ask its questions and offer its comments, they pointed to those sums spent on the World Cup, the country’s controversial arms deal and all those ministerial handbook goodies as pretty good places to look whenever budgets for land reform get debated. But, meanwhile, back in his opening statement, Nkwinti also laid out the government’s three operating principles on land reform: de-racialising the rural economy where white equals landed and well-off and black means the opposite; marrying democracy and equity with continuing support for national food security; and the establishment of pro-development policies, not simply ones that measure success by the number of hectares transferred. While the first objective seems obvious, the second seems to be trying to marry land redistribution with support for large commercial agriculture, while the third one may pit redistribution targets against broader national economic growth. In an unusually blunt version of minister-speak, Nkwinti admitted that the government seems to have reached its current position without really knowing how much land it owns – or how much of that land is actually available to redistribute.

Responding to audience members who asked what she thought a new national land strategy would – or should – look like, Andrews insisted that, first of all, lots more money would help a lot – as would an agricultural development bank that works in the interests of the nation as a whole. Hmm, doesn’t the nation already have a land bank? Or not. By contrast, the minister argued that the two key challenges to surmount for a viable land reform strategy are – first of all – the vested interests now in existence in agriculture, tied together with the government’s general ineffectiveness in implementing its decisions or policies; and second, the dewy-eyed romanticism of those who say it is easy to change the structure of ownership, and that all it takes is will power. Well, the minister didn’t actually say “dewy-eyed”, but you knew he meant something close to that.

Judge Davis, injecting some awkward facts into the discussion to keep it from flying entirely into the theoretical, reminded the audience and the panelists that nearly 70% of agricultural land is now in the hands of privately owned, large-scale commercial farming, even as the actual number of individual farms in the nation has fallen by more than half since 1971. These facts point to the rapidly growing industrialisation of South African agriculture, just as has been the case in much of the rest of the world. Moreover, as one alters the nature of land (and farm) ownership, one can produce unintended consequences for food security and food independence as well. Andrews, apparently longing for an idyllic communitarian landscape, continued the pressure for the creation of an agricultural universe that supported a shared commons for cattle grazing along with communities of stalwart, small-scale farmers who grow their own food in a kind of high-tech, subsistence-farming lifestyle.

Well into the discussion, Stone Sizani joined in after arriving from other meetings and added some of his own awkward truths. According to Sizani, it is nearly impossible to speak about an easy path to land reform without causing some serious, fundamental psychological changes in the way formerly land-poor people treat land they would receive. As Sizani argued, in a society where the seemingly simple question of “what is the meaning of owning land?” is often barely grasped, let alone answered successfully; wholesale education around how people hold, and then use, land is crucial before redistribution – not afterwards, when it is too late to avoid disasters. Sizani pointed to the fact that marginalised people often rent out newly acquired RDP homes, partly for the income, but also because of the new –  and difficult –  demands of actual ownership they face. For Sizani, the key is what he termed user-ship and stewardship, not just ownership of land. Tied up with this is the fundamental issue of how land can be used to leverage the creation and growth of income and wealth – anyone for channelling Peruvian economist Hernando de Soto? New land ownership via redistribution, for those new owners, is also a mental state and not just a national state. Judge Davis added a further concern, noting that, according to the experts, of the millions of hectares already redistributed, some 90% is no longer being used for actual agricultural purposes.

So, who didn’t come to this meeting? First of all, we did not have Julius Malema’s demands for immediate, compensation-less land redistribution. Any conceivable plan for rapid and thorough redistribution that doesn’t also produce the kinds of baleful consequences alluded to in Clem Sunter’s presentation becomes one of the biggest stumbling blocks for proponents of speeded-up land reform policies. In addition, there is the fact that this effort would be in the hands of the very creaky bureaucracy that the minister referred to during his opening comments.

But the rest of the world’s recent experiences with land reform also seemed to stay beyond the doors of this discussion. The experiences of Japan, Korea and Taiwan, post-World War II, with rigorous land reform/redistribution policies barely seem to have been examined by South Africans. Moreover, South Africans seem to consider their land reform and redistribution issues as independent from the nearly implacable movement of people from rural areas and small towns to big cities. By virtue of apartheid’s half century of restrictions on internal population migration – and still earlier, although less rigorous policies, before formal apartheid – this country is only now catching up to the vast global migration of populations off of farms and onto city streets that began over two centuries ago. For many nations, this process was demeaning and harsh – or much worse – to the people who did the moving. But it ultimately led to great economic growth, in the US, in China, in Europe and elsewhere, as labour became available for new industries that added value to the world’s economies.

What critics like Andrews must begin to address more fully is what kind of policies must be fostered that can add real value to an agricultural way of life and that will simultaneously encourage more people not to make that irrevocable move to the cities. Not because people are chained to a rural way of life, but because they choose to stay there for their own betterment. Meanwhile, the challenge for government leaders is that they must figure out ways to bring more land to those who genuinely want it and will work it effectively – before the rabble-rousers make other policies for them. DM

Disclosure: The Daily Maverick is the media partner of the National Art Festival’s ThinkFest programme.

Think!fest is a space for leading thinkers from a broad spectrum of disciplines to share their insights in a series of lectures, workshops and discussions at the Grahamstown National Arts Festival. topics range from question of disability and dance, the needs for land refom (and how to do it), the place and future of arts criticism, new developments in brain science and speakers discussing on issues of personal and social freedom. Think!fest ends with discussions on the role of youth and leadership for the future.