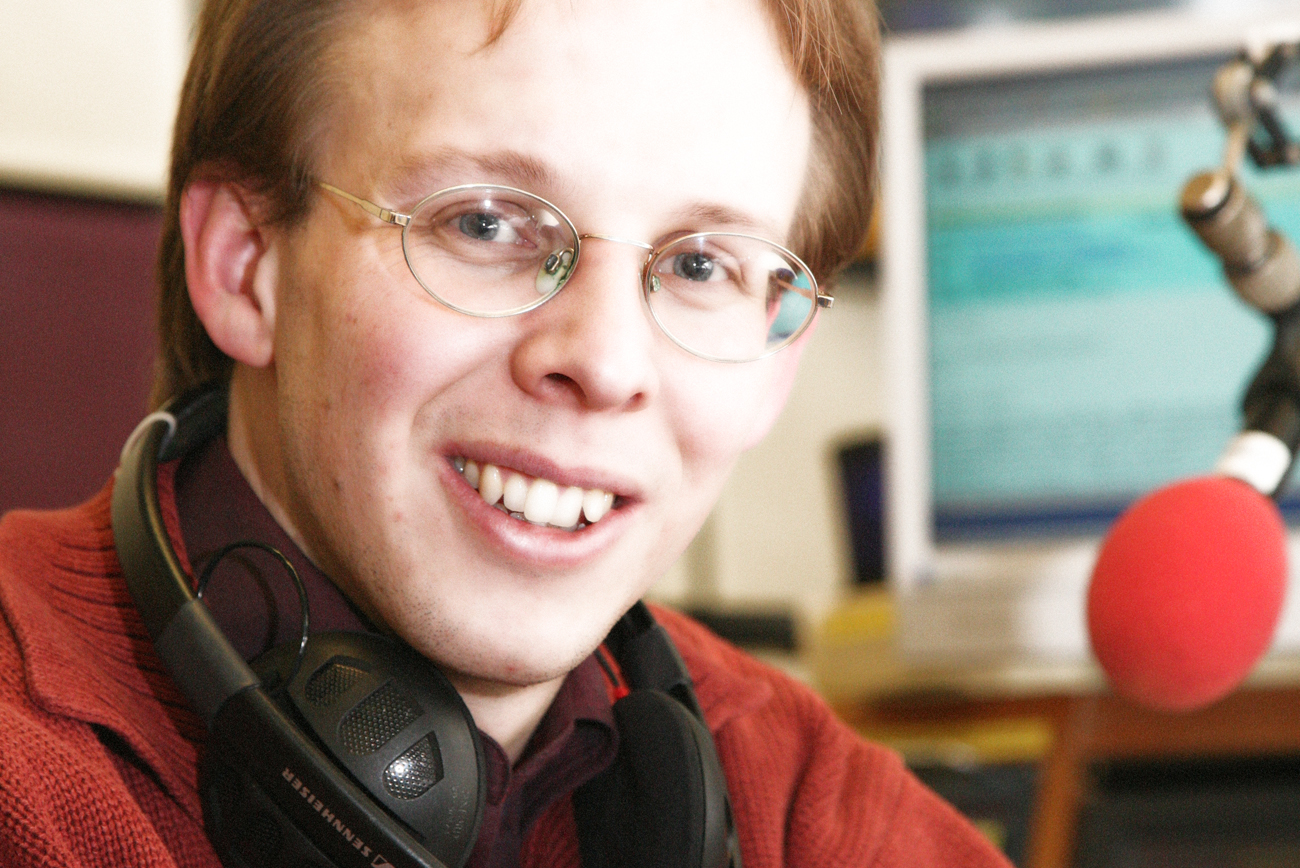 What do you get if you put together a naked scientist and a chocolate teapot? Maverick Science, of course! Explained to you in easily-digestible bits by the inimitable Chris Smith. By J BROOKS SPECTOR.

“Naked Scientist” Chris Smith looks a little different to what the radio listener almost certainly imagines him to be like. Slight, sandy-reddish hair, glasses, youthful – almost like the guy who came to fix your computer network last week or the one who sold you a newer laptop that does the work better, faster and at half the cost. But Chris Smith also is razor-sharp, wickedly funny and quick. Very quick.

The funny thing about Chris Smith’s “Naked Scientist” moniker is that this logo appropriates and tweaks that uber-famous Leonardo da Vinci Vitruvian Man image, who stands clearly sans clothing, with his arms outstretched, and inscribed within a circle. In ironic contrast, Smith’s “Naked Scientist” wears a white lab coat. It’s a bit of a tease. Da Vinci’s iconic picture has been used for centuries as a visual metaphor for man’s search for knowledge and understanding. With Smith’s image, maybe he really is naked underneath – or maybe he’s not – but clearly we’re supposed to want to know more.

Smith is a master at taking on thoughtful, deep, shallow, wild, whacky and weird questions and then using some very simple materials to unwrap real scientific issues. He and his team deconstruct the quaint English phrase, “as useless as a chocolate teapot” to find out whether a chocolate teapot really is the archetype of uselessness. And that takes us to more fundamental questions of energy conductivity and then on to an understanding of molecular motion. Or, consider the strange question of just how fast the particles we expel in a sneeze can travel? Or, how far that expelled material travels? Smith and his team devise a simple experiment using a man whose nose is dosed with an injection of pepper, plus very high speed imaging equipment to do the actual measuring. In case the reader is wondering, Smith notes the results clock in at about 108 km per hour – and he adds that the expelled material contains more than enough of a viral load in very tiny, far-travelling particles to infect everyone in the lecture room with this year’s version of a particularly virulent flu.

Originally trained as a virologist, Smith continues to do active scientific research at the Cavendish Laboratory at Cambridge University. But he has also turned himself into a media phenomenon with his family of radio programs on the BBC, the Australian Broadcasting Corporation, and  local radio stations in South Africa. And his broadcasts and related presentations are offered as highly popular podcasts as well.

The unique Smithian style is to take questions from audiences – live audiences, call-in audiences, email questions, SMS questions – and use them to launch into an exploration of the more basic science that underpins the queries. And this discussion, in turn, allows Smith to guide, jolly and cajole his audience into a better understanding of the scientific method of testing a hypothesis to gain a better comprehension of how the universe really works.

The other thing about the Smithian method is that he takes on any question in virtually any field. He doesn’t pander to people or dismiss any question as unworthy of a response. Smith says he religiously reads at least three scientific journals per week in order to stay up-to-date and thoroughly informed in the various fields of science, making him the very model of a certain Gilbert and Sullivan character who had “information vegetable, animal and mineral” and who was very well acquainted with “matters mathematical… teeming with a lot of news, with many cheerful facts about the square of the hypotenuse”. And that’s the thing about Smith as well. He is relentlessly cheerful when he speaks to his equally eager audiences. Science excites him and he is fairly desperate to infect his listeners with that love for the kind of inquiry that leads to better, fuller understanding. One wonders what a dialogue between Chris Smith and the late Isaac Asimov would have been like.

After his formal presentation The Daily Maverick spoke briefly with Smith about science education, the media and society. Smith explains that he has been especially eager to help fill what he sees as a growing void in the way the mass media explains and interprets science to its vast audiences. It makes one wonder if this gap in encouraging an understanding of science and its place in and effect on society helps explain the lack of belief in much of science’s message for many people.

Smith adds that a lack in a visceral excitement about science and the thrill of discovery affects the numbers of people who pursue scientific careers – and that has real impacts on how societies and economies respond to the future. Smith notes, for example that the US, the UK and Australia have about 50 to 60 scientists per 100,000 people, while a country like Japan has about 100 per 100,000. And as for South Africa? Just ten per 100,000. And Smith worries for South Africa about how such a low level of scientific competence is going to affect this country’s economic future. Therefore, what is being done to generate more scientific training in South Africa is also a matter of concern for Chris Smith – as it should be for everyone else in the country.

A key part of Smith’s shtick as a science populist is that it doesn’t always need expensive equipment to educate. A whole range of important scientific concepts – and especially fundamental principles in physics – can be taught innovatively by using materials and products found in even a modest kitchen. For an American of a certain age, Smith’s comments invoke a nostalgic memory of the long-running TV programme, “Watch Mr Wizard!” – a project that helped make science cool for a nation suddenly under threat by the Soviet Union’s early space successes.

And about this article’s blurb? Chris Smith’s latest book is entitled “Crisp Packet Fireworks” and it contains a whole roster of experiments anyone can do at home, complete with illustrations and fuller scientific explanations. But what is it titled for release in South Africa? Readers will find it soon in book stores under the name: “Maverick Science” by Chris Smith and Dave Ansell. Really. DM

Disclosure: The Daily Maverick is the media partner of the National Art Festival’s ThinkFest programme.

Think!fest is a space for leading thinkers from a broad spectrum of disciplines to share their insights in a series of lectures, workshops and discussions at the Grahamstown National Arts Festival. topics range from question of disability and dance, the needs for land refom (and how to do it), the place and future of arts criticism, new developments in brain science and speakers discussing issues of personal and social freedom. Think!fest ends with discussions on the role of youth and leadership for the future.