Honda Accord: Gunning for a place in a tough market

Honda Accord: Gunning for a place in a tough market 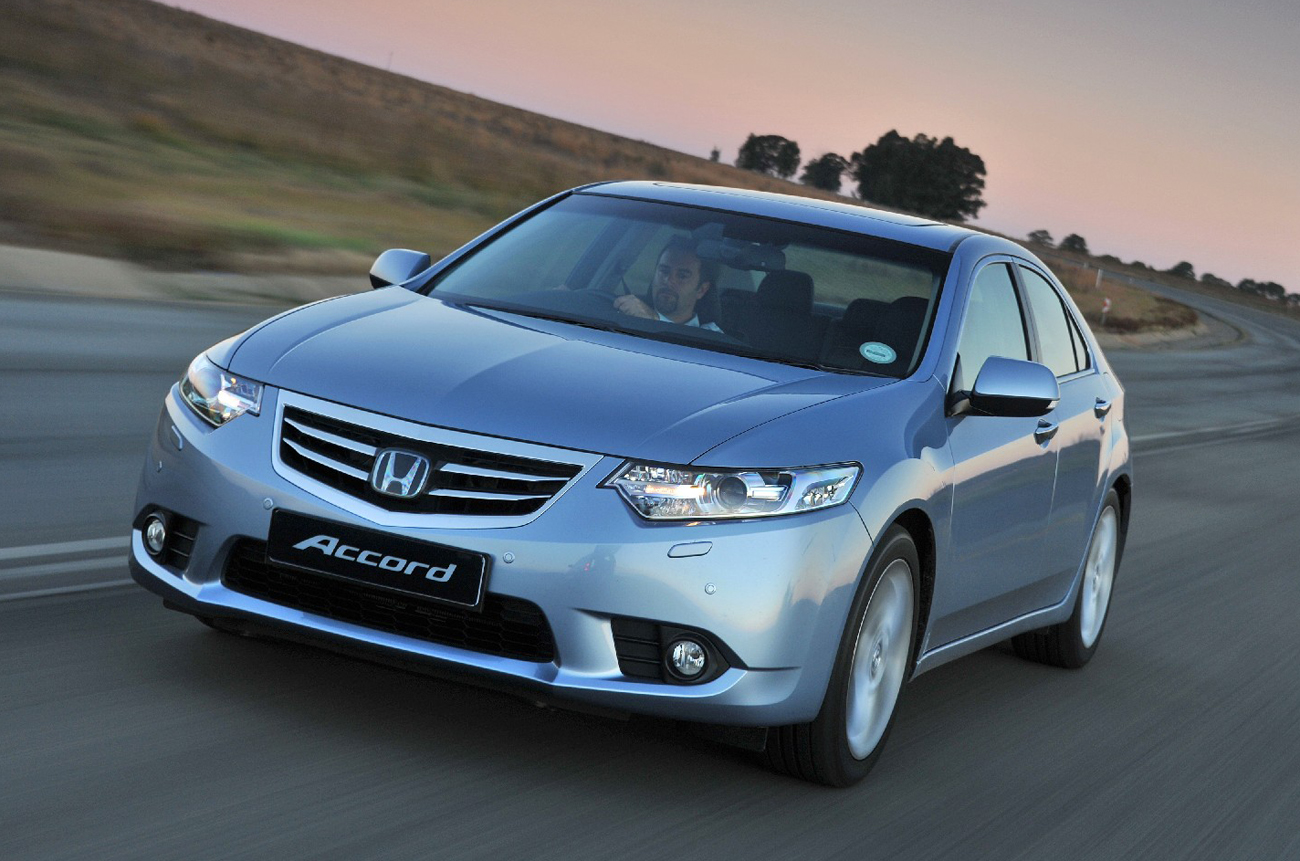 The Honda Accord may be one of the leading players in the South African medium sedan market, but it’s still very much an underrated car. And that’s no fault of the Accord. Instead, the problem lies with the segment it’s competing in. You see, South Africans would rather drive smaller premium cars than larger mainstream machines. With spruced up looks, and more tech, the latest Accord will want to change that … By DEON SCHOEMAN.

With BMW’s ever-desirable 3-Series a prime rival, that’s a tough task, though. And  the Accord also  has to take the fight to the likes of the Mercedes-Benz C-class, with image and prestige the key attractions of the Three-Pointed Star.

The Audi A4 is another status-driven product that has become a firm favourite in this category, but interestingly, Volkswagen’s Passat is a more direct rival, despite its European origins. In fact, it’s always been as underrated as the Honda, perhaps because of its perceived inferiority to sibling brand Audi.

At VW they’re putting a lot of effort into elevating the Passat name beyond the expectations created by the Volkswagen brand. And much the same could be said of the Accord. Indeed, the big Honda sedan presents a convincing and appealing package, starting with its clean and sculpted looks, together with a well-executed, spacious interior, and close attention to active and passive safety features.

Less obvious – at least until you get a chance to drive the car – are the composed road manners and the convincing dynamics. But the real question is whether this facelifted version will persuade more buyers to join the Honda fold.

It has to be said that the exterior changes are subtle rather than spectacular. In fact, it would take a committed connoisseur of the marque to spot the individual differences. The Accord retains its crisp, contemporary looks, and the differences are all  in the details. For instance, the redesigned headlights look cleaner and edgier, but they also reflect improved functionality, with active cornering lights and bi-Xenon elements included on top-end Accord variants. Also new are the resculpted bumpers front and rear, as well as sleeker taillight clusters.

In fact, many of the changes have been fuelled not only by the need to spruce up the Honda’s looks, but also by closer attention to aerodynamic efficiency, which has a direct impact on fuel economy, performance and overall operating costs.

However, you won’t have any trouble recognising the updated Accord. Its classic three-box sedan shape remains low-slung and sporty, with the long and prowling nose, low roofline and a short, high deck emphasising the car’s athletic stance. The rear bumper now incorporates a subtle diffuser and twin exhaust tailpipes, although the vast expanse of colour-coded plastic can look a little bulbous and heavy-set. At least the high and sculpted waistline, and the narrow glass apertures, emphasise the Accord’s subtly wedged profile. Those 18-inch wheels and low-profile rubber promise grip and composure, too.

One of Honda’s strengths is cabin layout and design, and the Accord is no different. It doesn’t have the space-age appeal of its smaller Civic Hatch and CR-Z cousins, but it offers a clean and ergonomic layout, fleshed out with a comprehensive features set and embellished with a sense of luxurious comfort.

Since there wasn’t any pressing need to change any of these attributes, the 2011 Accord’s cabin focuses on smarter finishes with more metallic accents, in line with global trends. But it steers clear of falling into the glitz-and-glamour trap, while there’s a reassuring sense of authentic quality that augurs well for long-term service and enjoyment. Also new are the model designations. While our test unit was a top-spec Exclusive, buyers can also choose from the midrange Executive and even more affordable (in relative terms) Elegance versions. High equipment levels are standard across all three variants, with the Exclusive getting the full-house treatment.

The standard execution includes all the usual kit – electric windows, mirrors, seats, climate control and a multi-speaker CD receiver with MP3 capability, as well as a USB connector that will work with flash drives and iPods. An overriding sense of space and quality adds to the feel-good factor.

Perhaps the most important advance is the addition of several new, high-tech systems. For instance, there’s the Collision Mitigation Braking System (CMBS), which uses radar to sense an impending collision. It alerts the driver, tensions the seat belts and finally applies the brakes. The Lane Keeping Assist System sounds an alarm when the Accord strays out of a lane, and will even self-steer to keep the car on course. And then there’s the radar-based Adaptive Cruise Control, which measures the following distance between the Honda and vehicles ahead and reduces the car’s speed accordingly.

These systems certainly elevate the Honda into the premium league as far as technology is concerned – and are perhaps Honda’s way of thumbing its nose at the perceived superiority of those top-end brands.

One aspect that hasn’t changed at all – at least in the petrol context – is the engine. The previous model’s 2,4-litre i-VTEC four-cylinder unit remains firmly in place, and still produces 148kW of maximum power, linked to a torque peak of 234Nm. In the best Honda tradition, it’s a smooth and eager mill, with a real appetite for revs – a welcome departure from the current trend towards torquey engines with loads of low-down grunt, but little exuberance at the higher end of the engine speed range.

Of course, the potential downside is a peaky power delivery that requires frequent gear changes and lots of throttle input, but Honda’s i-VTEC variable valve timing manages to neatly balance power and torque requirements, while still offering the enthusiastic driver the full scope of revs with which to play.

In that context, the presence of a snappy, short-shifting six-speed manual gearbox is a welcome one, although I sense that buyers in this segment are more likely to opt for the six-speed automatic transmission, complete with shift paddles. But given the Accord’s sporty edge, I’d take the manual any day.

In that guise, performance is brisk, if not exactly ground-breaking. The Accord will sprint from rest to 100km/h in 8.1 sec at sea level and is good for a 227km/h top speed. But this car’s dynamic appeal is about more than just straight-line speed.

The chassis feels tauter and more composed than you’d expect of a sedan competing in this segment, allowing wieldy responses and high grip levels. While the steering feels a touch overassisted, the Accord turns in with alacrity and always feels fleet-footed and entertaining.

In fact, the dynamic prowess of this car is perhaps its most underrated talent. That’s surprising, given Honda’s reputation for cars with driver appeal. The Accord may be positioned at the luxury end of its segment, but it lacks nothing as far as spirited performance is concerned. Of course, vigorous driving and fuel economy aren’t exactly mutually conducive, and that’s certainly the case here. While Honda claims a fuel consumption figure of 8,8-litres/100km for the combined cycle, our test figure was solidly in the 10-litres/100km bracket. The rated CO2 emissions figure is 203g/km.

Except for some tyre roar, noise levels are well contained, adding to the cabin’s serene ambience, while the presence of six airbags, ABS brakes and vehicle stability control add further motoring peace of mind. So, does this spruced up Honda Accord have what it takes to challenge the premium car contingent? It’s certainly sharper (and smarter) inside and out, while its arsenal of high-tech features boosts both safety and image. I also like its sporty and engaging road manners, which will endear it to fellow motoring enthusiasts who require space and luxury too.

In other words, it’s a great car made even better by the latest updates. But Honda’s real challenge will be to persuade buyers outside its loyal customer base to at least sample its charms. In a country where perceptions often outweigh reality, test-driving the Accord may well present the most compelling argument of all. DM